ArtsHub speaks with artists about the solidarity of supporting Quilty’s Afghanistan campaign, the role of social media, momentum and perceptions of philanthropy – and how our sector can use these lessons.
Gina Fairley 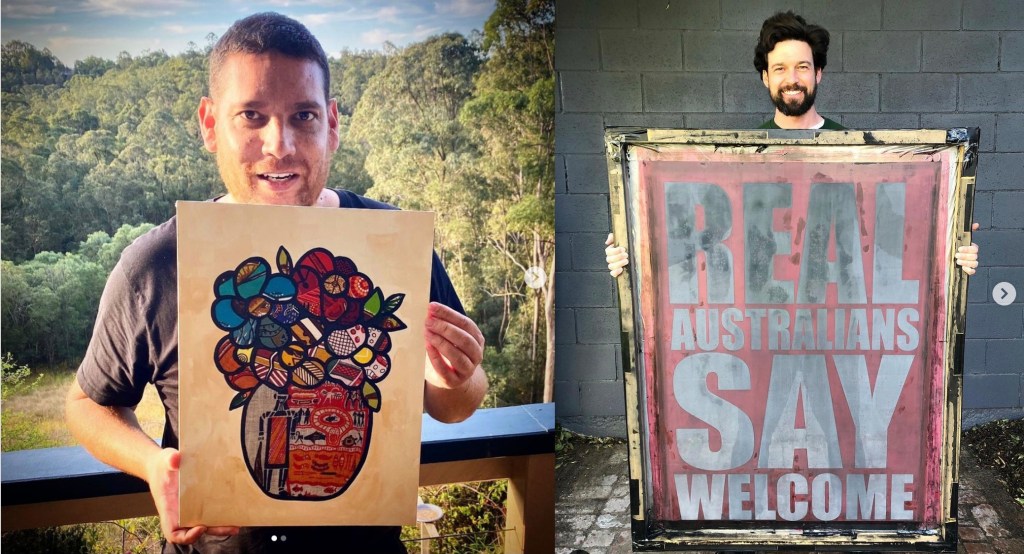 Artists Tony Albert and Peter Drew join many to raise fund for Afghanistan via social media.

On the same day (30 August) that the Federal Government extended a lifeline to three leading arts organisations (one being Opera Australia) – some $5.5 million from the COVID-19 Arts Sustainability Fund – a group of artists had raised in excess of $4.5 million for Afghanistan.

But it only took the artists just over a week.

ArtsHub reported on this ‘Crisis in Afghanistan’ campaign as it launched, spearheaded by artist Ben Quilty, and largely promoted through social media channels. Today, many more artists have joined Quilty in auctioning artworks via social media, as well as a number of individuals who have lent their financial muscle.

That target was achieved on Saturday, with Quilty announcing: ‘We just SMASHED ONE MILLION dollars.’ That figure is still escalating.

ArtsHub spoke with a number of the artist who have stepped up about the role of social media, ceasing the momentum, and perceptions of philanthropy – and how our sector can use these lessons.

Tony Albert is a Trustee of the Art Gallery of NSW alongside Quilty. He joined a number of artists in auctioning an artwork via social media, with the funds going to the campaign.

‘Momentum is important because we are asking people to buy, and that is a big consideration. It was the same for the bushfires.’ Albert added that his piece quickly jumped above its retail value in a matter of days.

‘It’s an opportunity for people to get something, but I also realised this is a way I can help,’ he told ArtsHub, on why the strategy works.

Real Aussie artist and campaigner Peter Drew has similarly turned to social media to auction off the screen that launched his celebrated poster campaign. Drew told ArtsHub: ‘I have learnt to hold onto an idea until the time is right.’

‘I find a lot of what I do responds to large collective feeling but when I saw Ben’s initiative I knew; I had in the back of my mind to give away the screen, but it was the sort of thing that needed to sit until the right time comes,’ he continued.

‘As an artist it is very easy to get caught up in your own enthusiasm for something, but unless that feeling is also with the audience, then it doesn’t really work. People want somewhere to put their emotion, ‘Drew said.

‘Timing is everything,’ he added.

Drew raised just over $17,000 via his screen – purchased by celebrity chef and arts enthusiast, Adam Liaw, who is planning to loan it to a public institution.

Artist and filmmaker Angus McDonald (who is also an Ambassador of Human Rights Watch Australia) raised $62,000 from the sale of a painting of Afghan-born Australian lawyer and writer Mariam Veiszadeh – pushing the campaign over the $1 million target and activating promised matched donations from the Atlassian co-founder, Mike Cannon-Brookes and his wife Annie Cannon-Brookes.

McDonald’s painting will enter the collection of Katrina and Simon Holmes a Court.

In a similar way to Liaw’s, Drew purchases are also being made available to the public. A unique copy of  Richard Flanagan Booker Prize-winning novel, The Narrow Road to the Deep North – was purchased (also by online auction) by Cred Consulting for $20,000, gifting it to the National Library of Australia. It makes for an interesting cycle of giving.

The book was presented to Richard Flanagan on the night he won the  prize in 2014 and is handbound in goatskin and hand-marbled by leading British bookbinder Sue Doggett. Flanagan and Quilty followed the devastating river of refugees leaving Syria and Afghanistan in 2016.

Quilty reported of his gift: ‘Flan has no social media but asked me to add ‘Dad used to say, “Money is like shit. Pile it up and it stinks. Spread it around and it grows things.” Help Ben get to a million and grow something good.’

And Luke Cornish (e.l.k.) – who ArtsHub chatted to last week – cracked $20,000 on a print he was offering via Art Aid Australia; while Sydney artist Kim Leutwyler, Melbourne artist Jonny Niesche, and many others have joined the efforts this past week.

It is not exclusive to the visual arts. Australian musicians are also banding together and taking to Instagram to play tunes and raise funds. This Thursday a line-up of the country’s best artists are set to stream live from their homes for 8 hours to raise money to aid the people of Afghanistan.

The folks behind Isol-Aid have teamed up with Didirri, Greg Carey and Michael Ridgeway (Grow Yourself Up) to schedule a mega lineup of artists all playing direct to your screens. Running from 3pm to 11pm on Thursday 2 September artists will play live from their Instagram accounts, with all donations directed to Mahboba’s Promise Afghan Relief Fund.

While this is a story about the power of artists working collectively, it is also a narrative about the shifting perceptions of philanthropy. While calling on contacts and mates is the foundation to this campaign’s success, it indiscriminately celebrates those who give.

Matched funding has been around for a long time as a strategy, but this demonstrates how successful it can be in amplifying efforts – putting the small and the big on even footing.

Albert told ArtsHub: ‘I am a huge believer of what can come from nothing, having had no money. I always refer to the Obama campaign – rather than ten people giving millions, ask millions for a little bit. That is groundswell – and it works with philanthropy.’

Drew continued: ‘I think the structure of things has changed, so that large collective groups making small donations can do amazing things – it is more possible than it used to be.’

Quilty said: ‘I have opened it up. So many artists are about to donate and I’m so aware that many of you have very little to give. I’m so humbled. Let’s keep it going.’

‘I was blown away by Mike’s [Cannon-Brooke] push to go harder and dig deeper, inspired by your vision and generosity,’ Quilty thanked Brookes on social media for kicking off the matched funding.

Cannon-Brookes was followed with one million from Karen Wilson and the Wilson Foundation, and further million by Scott Farquhar and Kim Jackson.

THE ROLE OF SOCIAL MEDIA

Part of the shifting role of giving is the shift in technology and online platforms.

Drew told ArtsHub: ‘There are so many things about social media that are less than positive, so it is nice to be reminded of the positive things.’

Albert continued: ‘I was watching my Insta stories last week (as I was moving house) and one artist after another was joining in. That solidarity between artist is where this media works. If Ben instigates, then I know I have to be there to show that solidarity.’

He added: ‘We can’t give to everything, but we are in a position to do something like this – it is a bit different to the stock-standard ask.’

In the face of the Federal Government’s slow response to valuing and supporting artists in this pandemic – when clearly this campaign demonstrates their capacity to contribute to society – Albert said, ‘You lead by example. The evidence is there; we are trailing [in support].’

Drew added: ‘If communities can spontaneously form and raise funds, and that someway embarrasses government, then that is a great way to lead.’

Quilty had the last word with his comment: ‘I have been blown away by your generosity and the generosity of my arts community over the last few days has been astounding. I am a proud artist.’

You can still support the Crisis in Afghanistan campaign, and follow further artworks being donated by artists and auctioned via social media @benquilty and Twitter.