An elderly woman who attempted to restore a 19th century historic painting has unfortunately ruined the masterpiece in the process.
ArtsHub
[This is archived content and may not display in the originally intended format.] 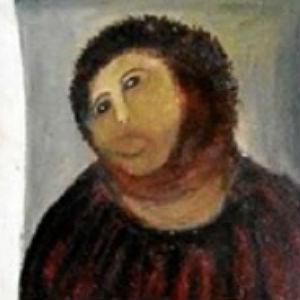 A restoration attempt of a 19th century painting by Elias Garcia Martinez has gone horribly wrong, damaging the painting beyond repair.

The restoration was attempted by Cecilia Gimenez, an elderly woman in her eighties who was a neighbour of the Santuario de la Misericordia Catholic Church in Borja, which graced the painting in its walls. Gimenez acted ‘without asking anyone for permission’, although local culture councillor Juan Maria de Ojeda admitted that the woman’s actions were done ‘with good intentions.’