What to say when the news is all bad

In 2020 we've all had our share of bad news whether it's personal, professional or pandemic. Dr Diana Carroll looks at how you can help a friend in need.
Dr Diana Carroll 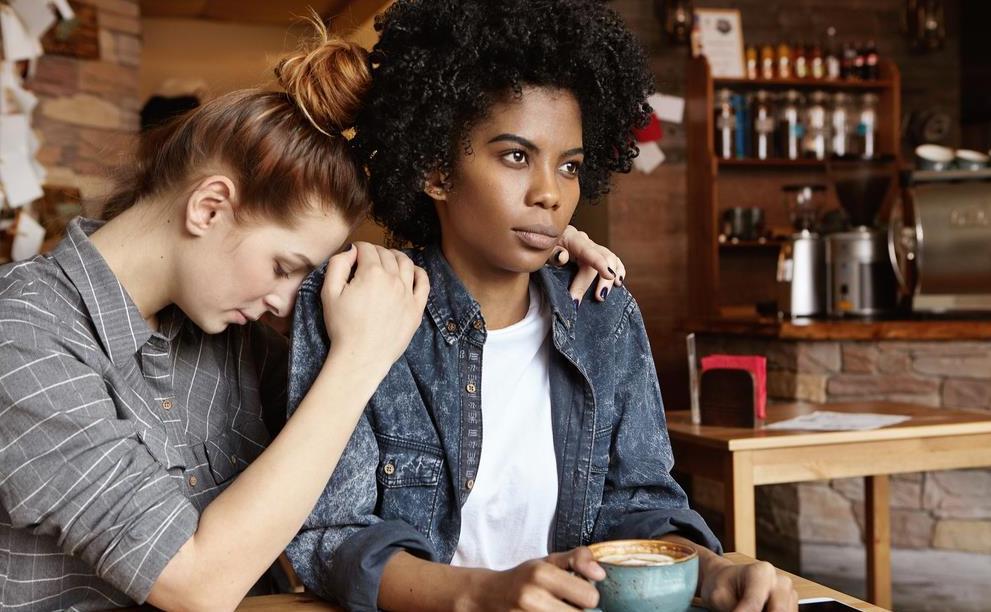 Helping a partner to reconnect after bad news is an essential part of helping them cope. Image Shutterstock.

For many people working in the arts and creative industries, 2020 has been a year they’d like to forget. Arts organisations have lost funding, live performances have been cancelled for six months or more,  companies and venues have closed and many won’t reopen, the government’s rescue package has been delayed, and countless people have lost their jobs. The knock-on effects of this uncertainty and insecurity are devastating – including long-term unemployment and serious under-employment, stress, depression, and financial failures.

When someone loses their job or their business their self-worth takes a beating. They can feel like they have lost an important part of their identity and their reason to be. With the best will in the world, your first impulse may be to sound positive and tell them things will get better soon. But that could be just what you shouldn’t say to a friend or colleague who is doing it tough. So what can you say to someone who has been hit hard by the effects of COVID-19? Here is a quick guide to being  there:

It’s Not What You say

Many of us feel awkward when someone is upset because we just don’t know what to say or do to make them feel better. But don’t let your personal discomfort stop you being supportive. Very often it really doesn’t matter what you say. Being there, offering comfort and support, and being willing to listen, openly and without judgment,  is what matters. And the truth is, if someone is very upset they probably won’t really be listening to what you say – they’ll simply remember emotionally that you were there when they needed someone, and that’s very important. It’s about showing understanding and empathy, not giving advice.

Leave the positive spin and self-help mantras until a later time when they’ve processed their feelings and can look forward more clearly.

This is not the moment to mention silver linings  or suggest they use all this free time to take up a new hobby – that will just add to their frustration and resentment. Leave the positive spin and self-help mantras until a later time when they’ve processed their feelings and can look forward more clearly.

Very often when we’re upset we just need to vent our feelings but that gets harder as we get older. Sometimes we’d all like to be a frustrated 3-year-old, stamping our feet and screaming. If someone is feeling frustrated, angry, betrayed, or even just scared about the future, let them express those emotions. It’s always cathartic to have a safe space to express that anger, frustration, disappointment, or hurt. Be sure to listen attentively and accept their feelings – scrolling social media whilst someone is venting just shows you are not listening to them. Don’t try to debate what they say; this isn’t about trying to solve their problems, it’s about letting them work through all that pent-up emotional energy. Everyone feels better knowing that someone is listening. Use positive body language, such as nodding and eye contact, to show you’re in the moment with them. And understand that they may feel like a failure, even if this was completely beyond their control.

It really is being there that matters. Don’t back off completely, even if they say they don’t want to talk about it at first; just give them some space. And don’t be offended if they seem withdrawn or distant – it’s just their way of coping with what’s happened. Show that you will be there for them if they change their mind and want to talk later. A friendly email or brief phone call lets them know you care and are still thinking about them. Ask directly what you can do to help. You can always try to find other ways to be supportive, such as offering to look after the kids to give them some ‘me’ time to process what’s happened and think about moving forward. Saying ‘what do you need from me?’ lets them decide. And coming together, when the time is right, can be hugely important when we feel like we’re falling apart.

Read: Why creative people are more prone to depression

It’s important to accept whatever they are saying as being a genuine reflection of how they feel right now. Don’t judge them, argue with them, or try to fix the problems – just acknowledge how they are feeling. Saying ‘I always thought you hated your job,’ is not helpful. Instead, saying ‘It must be such a shock for you to lose your job,’ is much better because it validates their feelings of anger and frustration. Any major life change like this is a shock and your job as a friend is to help them navigate their feelings. Acknowledge that it’s real and normal to be shocked and scared and worried about the practicalities such as paying the rent. Validating their feelings will help them find their inner strength. You can’t change the situation but you can help them feel stronger and therefore more able to be brave and deal with it.

Whatever someone tells you when they’re upset should be treated as a confidence. Be a true friend by not repeating what you’ve been told. And do think twice about reminding them in the future of what they said. We all say things when we’re upset that we don’t really mean and may regret later. It is unkind to embarrass them by repeating word for word what they said.

For many people, their work also gives them the majority of their socialisation and human contact. As we’ve found working from home this year, it’s easy to feel isolated and alone without that. Encourage them to maintain social and professional contacts and still attend meet-ups and networking events where possible. And the old adage ‘It’s not what you know, it’s who you know’ still has legs. You never know when you may hear about a new opportunity. Finding some peer support, networking online and in person, and maintaining industry contacts can go a long way to normalising the situation and then moving forward.

Everyone needs to work through this at their own pace, so try to avoid putting pressure on them or constantly asking them about their plans for the future. As the old saying goes, a friend in need is a friend indeed.

If this article has raised issues for you, or if you’re concerned about someone you know, call Lifeline on 13 11 14.