What salons can teach us about conversation

The European salon has much to offer the arts – from better discourse to ways to disagree – argues John Armstrong.
John Armstrong 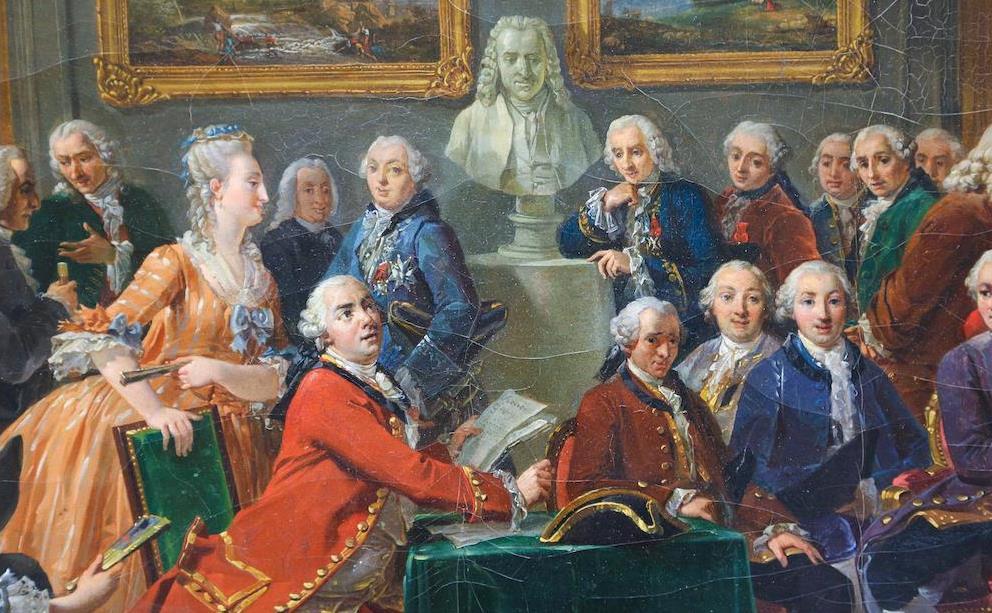 Painting depicting the reading of the tragedy l’Orphelin de la China by Voltaire in the salon of Madame Geoffrin in Paris in 1775. Image via Shutterstock.

Seen from contemporary Australia, the salon can seem like an odd artefact: a charming curiosity, which may be admired and understood in its period setting, but is no more relevant to contemporary life than the powdered wigs and crinoline dresses of its habitués from the 1700s.

But the salon has multiple virtues – and a distinctive potential – that fit the particular needs of our times. In the ideal salon of today, it’s not just avowed intellectuals who are present. A salon needs people who represent varied aspects of how our world functions – people with experience of public administration, of business, of finance, of advertising and marketing.

We don’t know nearly enough about the reality of other people’s experiences. We know some of the outside picture: we’ve a vague notion of what it’s like to be a real estate agent or a ministerial advisor or a writer or the manager of a medium-sized business; but the inner story of what is truly involved and what it’s actually like mostly passes us by. We need to hear the honest confessions, the backroom stories, the trials and the hopes of people who are not quite the same as us.

Theoretically, social life would provide this, but it’s routinely the site of the kindest failure.

Ten people get around a table or twenty-five people stand about drinking cocktails: it’s very pleasant, everyone is good-natured, but at the end of the evening we realise we have never gone above the level of polite chitchat. We’ve asked people how they are and they’ve told us they’re great; we’ve talked in a jokey way about what’s in the news – though we’d never give our honest views and don’t imagine anyone else would either.

Our hosts have devoted the greatest care to what we eat and drink – and it is certainly delicious. They’ve worried about the canapés and bought a new kind of balsamic vinegar for the salad dressing (and that’s a delightful thoughtful- ness on their part). But there’s no equivalent ambition that we should have a particularly fruitful or profound conversation. It’s no one’s fault. Australian culture hasn’t set this up as a central concern – as a necessary, even sufficient, ingredient for any social gathering.

Read: How to facilitate a panel successfully

The lovely idea of the salon is that conversation shouldn’t be left to chance. We should, in advance, hit upon a common theme for the evening.It might be fairly personal – what I’ve found most difficult in my career – or more overtly public: is democracy broken? We could tackle a huge philosophical question – is beauty purely subjective? – or a secret detail of existence: how often do you think you are an idiot? The questions aren’t ultimately to be resolved in a few hours of discussion.

The point, rather, is to identify a catalyst for the deeper explorations of one another’s experiences, attitudes, ideas, doubts, ambitions, worries, changes of outlook, styles of thinking and moments of revelation: that is, from the vast richness and complexity of accumulated inner life that we all carry with us, but rarely share in detail.

We learn most deeply when we learn from people we feel close to. We can grasp the allure of ideas that hitherto have been closed to us because they are advocated by someone we know well and trust and feel warm towards. The fundamental check on our intelligence is not so much barriers of rational- ity – an inability to follow a logical argument – but the private contours of our imaginative sympathy.

We don’t see how anyone could be a monarchist or an admirer of brutalist architecture; seventeenth-century Japanese prints or the music of ABBA mean nothing to us – until we hear someone we really like explaining in the right way their love for these things. We don’t need to hear it from just anyone – the world is full of enthusiasts who we easily dismiss. It has to be someone who has already won our respect and, more than that, has a hold on our affection. The closer we feel to someone, the more accessible their lives become.

Disagreement isn’t in itself a problem, though we understandably fear conflict arising on occasions that are supposed to be pleasing. What we’re ideally trying to do in the salon is educate one another in how to handle disagreement gracefully. What someone says may be the exact reverse of what you think – perhaps they are not right, maybe you are. But in the salon there’s a key premise at work: the other person is onto something, they’re not in any way stupid, they’re telling you what they believe.

This sounds like almost nothing, and entirely obvious anyway: but in reality it’s incredibly hard for us to accept that someone can be wrong and yet fascinating; that they can hold a view we find incredible and yet be a transparently decent and capable and intelligent person.

In the dream salon, the response when we encounter disagreement is not to try to decide who is right, but to explore the real reasons people think as they do. What attracts them to a particular way of seeing things? What experiences lie behind their convictions, what doubts have they had and how did they quieten them? To understand this is far more important than trying to convert someone or adjudicate a truth that – however grand- sounding – has little direct consequence on our lives. The deepest question we can ask others – but rarely do – is what does this idea mean to you?

This piece is republished with permission from Griffith Review 69: The European Exchange, edited by Ashley Hay and Natasha Cica, and published in partnership with the Australian National University.

John Armstrong has been a principal research fellow in the department of philosophy at the University of Melbourne, philosopher in residence at Melbourne Business School and a senior advisor to the university’s vice-chancellor. Since 2015 he has been global philosopher-in-chief at The School of Life. He is the author of many books, and translations of his works have appeared in more than twenty languages.