With the loss of Merv Moriarty, the visual arts has lost a great champion who took his teaching to the skies.
Gina Fairley 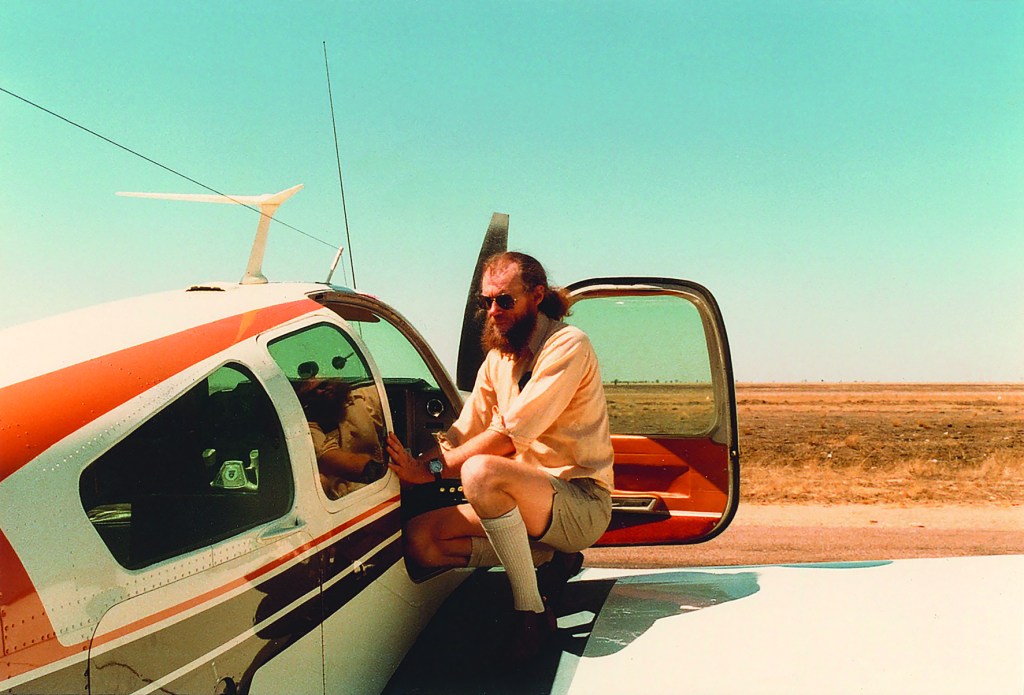 For those of us who live in urban areas, the idea of having art lessons flown in, is somewhat surreal.  But for the many who live in remote Queensland – and have had a visit from Flying Arts Alliance – this is a sad week.

Born in 1937 in northern NSW Moriarty’s work is represented in prominent Australian and international collections including state institutions in Queensland and NSW.

‘His parting is also bittersweet – we were very fortunate to have him around to watch our online 50th anniversary event at the start of October,’ said a spokesperson for the organisation. ‘If you mention Merv’s name in most regional Queensland localities you’re bound to hear some very moving stories. He was known and loved by many.’

Moriarty loved poetry, he loved figuration and abstraction, but most of all loved sharing how to paint with others. His artistic contemporaries include Roy and Betty Churcher, Karl and Dr Gertrude Langer and Queensland Art Gallery Director Laurie Thomas.

FAA, Executive Officer, Kerryanne Farrer said this week: ‘The most indelible memory for me was how many people remarked that [Merv] had helped them “see” differently and for that they were ever grateful. Thank you for your vision and determination to take art classes to far flung places.’

‘You truly changed lives for the better, including mine, having witnessed the genuine affection and admiration people had for you. We will do our best to carry on your steadfast belief that love of art has no boundaries or borders, and excellence belongs to those who dare to learn and practice their craft,’ Farrer added.

It was a sentiment reiterated by Chris Saines, Director of QAGOMA: ‘[Merv] did something that few can lay claim to: he created a very personal and memorable encounter with art and artists that came literally out of the sky and yet changed so many lives alongside the dusty runways he would have landed on.’

Originally established as EastAus Art School, it changed its name to the Australian Flying Arts School in 1974 to respond to funding requirements, and became known as the Flying Arts Alliance (FAA).

In 1970, Moriarty won the Cook Bicentenary Art Award with his painting Another Place. He used the prize money to take flying lessons, with the intention of establishing a flying school to provide art lessons across remote Queensland.

On his maiden flight, Moriarty left Brisbane’s Archerfield Airport  on a 6,000 km solo flight visiting Cairns, Mount Isa, Longreach, Charleville, Roma and many smaller centres along the way. It was the start of a pattern that would inspire a generation to come.

From that maiden journey until 1983, he flew his plane more than 400,000 km to deliver art education. Saines likened Moriarty’s service to the community to that of the flying doctor’s service, for its positive impact on wellbeing.

‘We might well be proud of the RFDS for all that it has done to bring emergency healthcare to the remotest corners of Australia, but we should be just as proud of the uncommon service that Mervyn provided in support of the arts in this vast state’s equally distant reaches. He undoubtedly changed many lives for the good along the way, and shaped many careers in the process. It’s a legacy of which his family, and Flying Arts, should be immensely proud,’ Saines said.

While in the early 70s when Moriarty’s career as an abstractionist and colourist was taking off, he fell in love with flying. It was a chance meeting with Dr Dorothy Hurbert, (head of the Charleville Hospital) who was a keen amateur artist and also a keen flyer who owned her own Cessna aircraft.

‘She took me for a flight in it, let me experience the controls for a bit and I suspect, without knowing it, planted a seed in my imagination.  I remain immensely grateful,’ Moriarty describes.

‘When I told a very good, and important artist friend of mine in those days, Roy Churcher, what I was doing, working at getting my pilots license to take art education to people in remote areas, he said, Merv  – that is the stupidest thing I have ever heard, then after a pause, he added, but it just might work,’ wrote Moriarty.

Getting the idea was one thing, but realising it was something else.

Moriarty, and then wife Helen, registered the EastAus Art School, and began teaching in Brisbane. They gathered contacts with the help of Gertrude Langer and the state Director of Cultural Activities, Arthur Creedy, while waiting for his pilot’s licence to be issued.

Funding was always tight. Moriarty applied to the Arts Council of Australia for support in 1973 for his blossoming company, but was declined, so he turned to then Prime Minister Gough Whitlam.

Whitlam asked his friend, artist Clifton Pugh (who had just won the Archibald Prize for his portrait of Whitlam), to accompany Moriarty on a trip and report back. As a result the program received major federal funding, but it was short lived. When Whitlam lost his seat in 1975, Moriarty lost his funding.

So to keep Moriarty’s project in the sky, it was amalgamated with the Kelvin Grove College of Advanced Education in 1978. The goodwill and the wellbeing that the program offered continued to impact many in regional Queensland, however, by December 1982 it was to come to an end for Moriarty, forced to leave Kelvin Grove CAE and his Flying Arts School.

He made around 1250 trips to at least 25 different locations from Queensland to the Torres Strait Islands, on an average year making four tours, each tour lasting two to three weeks. By the 1980s, small teams of 2–3 teachers were travelling in a four-seater, each day working in a new location with a group of from 4 to 20 people.

‘Mervyn was heralded as one of the best arts educators in the country,’ FAA’s spokesperson told ArtsHub.

In 2017, Clare Poppi described the program, as ‘a catalyst which brought social regeneration for hundreds of women living on rural properties and in large and small regional towns throughout Queensland.’

‘It’s really about overcoming the tyranny of distance and allowing people in regional and remote areas to have access to some of the arts and creative endeavours that people in the city take for granted,’ she said.

While Moriarty is remembered most as the founder of the flying painting school, he was also celebrate for his embrace for fresh approaches to colour theory.  Establishing his own Moriarty Colour Wheel, it became the definite teaching guide he used whether teaching in Brisbane or in remote locations.

His research was such that he also penned his 345-page master document: COLOUR: The Definitive Guide. It was recently celebrated in an archive/exhibition at the National Library of Australia, which has collected much of ephemera around Moriarty’s colour theories and the flying arts school.

His colour philosophy was a ‘need to balance logical and holistic thinking, in the arts, as in all human endeavours.’

Moriarty’s partner, Prue Acton reflected: ‘The theory that underpins Merv’s approach to colour was not just a result of his experience as a painter, his extensive research into new science of vision systems, and technologies such as computer graphics, but also the hundreds of Flying Art School participants who did a series of colour exercises Merv set, including disproving a colour theory based on Red, Yellow and Blue as the primaries of colour.’

Essentially Moriarty’s painting style was figurative. Moriarty’s own work The eye’s mind: the artist and the draftsman was published in a limited edition of 230 in 2009, imparting his wisdoms of teaching over 16 chapters.

A retrospective exhibition of his work, Colour: Mervyn Moriarty, A Retrospective Exhibition was presented at the Judith Wright Centre of Contemporary Arts Brisbane in 2016.

After the Flying Art School, Moriarty continued to teach, he went on to found the Brisbane Arts School (now Brisbane Institute of Art). In 1984, after a divorce, Moriarty moved to  East Gippsland, Victoria where he set up an Artist in Residence program.

In 2019, Flying Arts Alliance organised the tour and exhibition project Colour and Response to document the impact of Merv Moriarty and Flying Arts throughout Queensland.

By 2005, more than 30 artists were involved in teaching classes for Flying Arts, travelling to over 60 communities and schools per year. It has been calculated that the Flying Arts school reached over six thousand students in its first thirty years, the majority of them women.

It is an incredible legacy that Moriarty passed on.