Erections, snootiness and perverts: we investigate the misconceptions about being a life drawing model.
Emma Clark Gratton 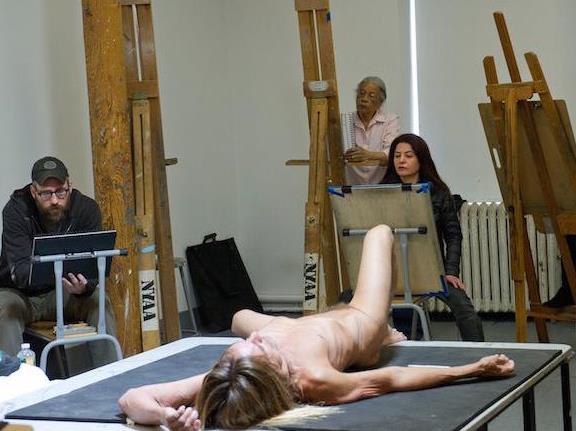 Ironically, the two most common misconceptions about life drawing are completely contrary to one another. The first is that it is a low, seedy business, frequented by perverts who want to leer at naked people. The second is that life drawing is the preserve of snooty, high-minded art nerds who would laugh a newbie sketcher back out the door. Both views, it turns out, are utter nonsense.

I have been a life drawing model on and off over the past decade, for various art schools and friends’ art classes. And I can say that it is neither seedy, nor snobby. Most classes have a convivial vibe, with a coffee break and chat, and are made up of everyone from accomplished artists to complete beginners. And life models don’t just pose for life drawing classes, they also work for animation students, sculptors, architects and one-on-one.

Life modelling doesn’t feel sexy. It can be cold and uncomfortable but it can also be pleasurable to be part of an intense artistic environment that has enabled artists for hundreds of years.

The first few minutes of my first session were nerve-racking, but I quickly got used to being naked once I realised that the students are all focussed on their work, not on my lumps and bumps. And then it became empowering: I began seeing my body for what it is. It’s hard not to feel like a Botticelli nude when you are draped over a cloth-covered couch and can hear only the sound of pencils on paper.

While life drawing has long been accepted in the arts, there is still a stigma attached in the wider community. None of the models we interviewed wished to include their last names, indicating that ,while they have no qualms with what they do, the rest of the world might not feel the same way.

John is a life drawing model in Melbourne. He became a life model to supplement his income as an actor. ‘I’d done a nude scene in a short film and quickly realised that life modelling would not be a big deal,’ he said. After participating in a life model training workshop, he began promoting himself to art groups and art schools. ‘The work trickled in and after six months, I was working regularly, sometimes up to five or even eight sessions in a week.’

While catwalk models are expected to be wire-thin clothes hangers, life drawing welcomes models of all shapes and sizes. Students want to draw a variety of body types, so models with curves, a pregnant belly, or body hair are just as in demand as trim and taut models. Skin folds and lumpy parts often make for a more interesting drawing.

‘I began life modelling when I was pregnant with twins,’ said Tess, a part-time model who enjoys the flexibility that life modelling offers for her young family. ‘I loved it so much that I kept doing it after my twins were born.

‘As a woman, having unknown people staring at your naked body can be quite confronting. There is definitely a degree of trust involved, but everyone I have worked with has been extremely professional. It is definitely not sexy or sleazy – if anything, it is quite clinical and workman-like.

‘The artists are all completely focussed on their own work.’

Read: The nude Bundaberg doesn’t want you to see

One only has to look at Renaissance art to see that artists have been using life models for centuries. Michelangelo’s mammoth sculpture of David (1504-1504) and Titian’s Venus and the Lute Player (1565–1570) were the outcome of years of study of the human form, and hundreds of figure studies using life models.

Life drawing is still an important practice for many artists, both established and new. Despite its significant history, many life drawing classes are open to anyone, regardless of skill. ‘The human form, in all its shapes and sizes, has a sensual beauty for sure, though artists often talk about the body just being a collection of shapes. Creating the illusion that those shapes are three-dimensional on paper or canvas is the big challenge for every artist,’ said John.

A class usually begins with the model holding several short poses for a few minutes each, then a longer pose for 20 minutes or more. The model can suggest ideas for poses, or the instructor can tell the model what kind of pose to do.

It is rarely as simple as just sitting on a chair: artists want to draw a model in all different positions, including sitting, standing, laying down, arms up, standing on one leg: the options are endless.  Holding a (sometimes uncomfortable) pose for a long period of time can be difficult, and professional models are in high demand for their ability to hold complicated poses for a long time.

My limbs get twitchy and I start shaking if I hold a position for too long, so knowing your limitations before committing to a pose is important. ‘I was once an student in a life drawing class where a model toppled over after trying to hold a tricky pose for too long,’ said Tess.

Read: Getting naked in the gallery

Many life models use props or costuming to enhance their poses. I have several large scarves that I sometimes use, but other models include everything from poles and sticks, to balls and hats. Other models might include elements of their other creative practices, including circus, yoga and dance poses. The performance aspect can be fun, but some artists prefer as little distraction as possible from the form of the body.

‘Life modelling serves me well,’ said John. ‘As an actor, I love the performance aspect too, sometimes introducing simple props and costume items into my short and long poses. We life models are performance artists!’

Our natural bodily functions can sometimes get in the way of a pose, but it doesn’t happen often. ‘As a male life model, one of the biggest misconceptions John hears is that spontaneous erections will be a big (no pun intended) problem,’ said John. ‘Believe me, erections seldom if ever occur! As a model, you’re too busy posing and when you’re in that pose, you’re thinking about the next one. Catering to the artists’ needs, while being kind to your body and knowing its limitations, is your priority.’

Tess agrees. ‘I once had to break a pose as I got my period during the class, which was unfortunate timing. I had a bathroom break and continued the class in a more comfortable pose.’