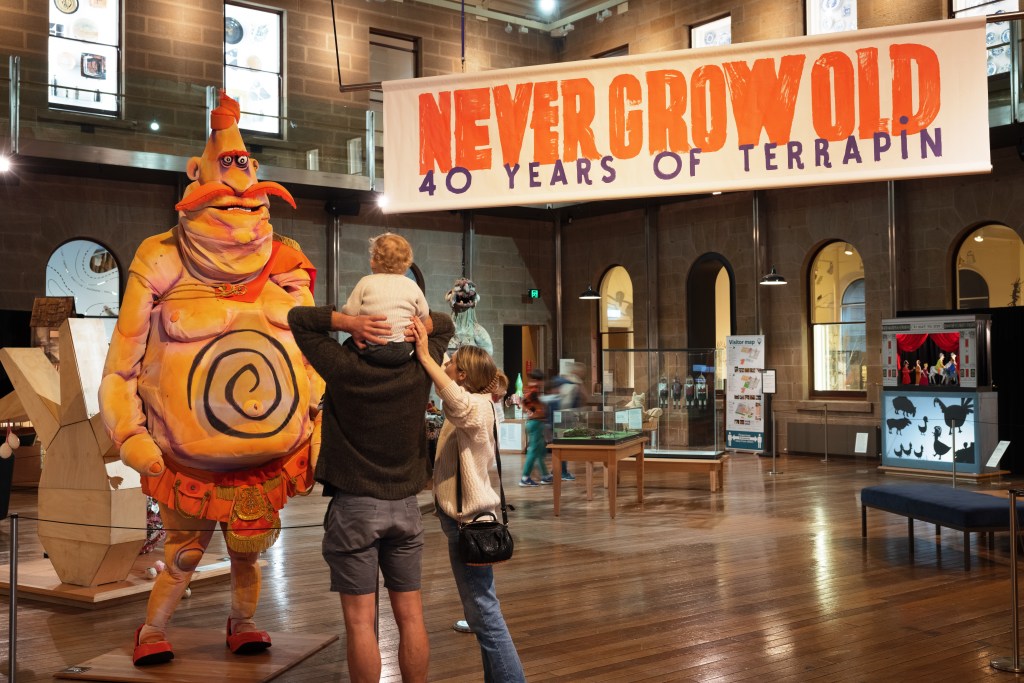 That fact that puppets aren’t always present in Terrapin Puppet Theatre’s recent work is perhaps indicative of how the company has endured for 40 years, according to the company’s current Artistic Director Sam Routledge.

‘My ideas for work always come from a base of puppetry, though some of them don’t have any puppets in them, but they do still come from bringing an inanimate world to life,’ he said.

This innovative approach to the artform has helped ensure Terrapin’s survival across four decades, in which time other companies have come and gone, Routledge explained.

‘We haven’t been constrained by a conservative understanding of what puppetry is and can be … and no one show is the same as any other. We’re able to move between form and aesthetics, depending on what suits the story or the production that we’re making,’ he said.

Together with the ability to effectively transition between different leaders and leadership styles, this flexible approach to puppetry has helped Terrapin endure and thrive, long after the beloved Tasmanian company was established by the late Jennifer Davidson in 1981.

‘For a company to survive that long, it needs to be able to effectively transition between leaders, whilst maintaining what is really important about the company, and it feels like Terrapin’s done that. It has always maintained puppetry as being at the centre of the company’s work,’ said Routledge, Terrapin’s sixth Artistic Director.

Equally importantly, Terrapin has always held its Tasmanian audience in high regard, he continued.

‘Tasmanian audiences have always been the company’s first priority through our schools touring program, and predominantly, the company has prioritised new and original Australian work. And within that, the company hasn’t been afraid to work outside of the theatre, presenting works in public space as well as working in theatres and schools,’ Routledge told ArtsHub.

A COMMITMENT TO EDUCATION

Annette Downs is now the Senior Producer at Tasmania Performs, but between 1992 and 1999 she was Terrapin’s second Artistic Director, taking over the company from Davidson, its founder. She recalls that the schools touring program was always central to Terrapin’s work, even at a time when the education market was extremely competitive.

‘There was a time in the 90s where there was a lot of competition in the schools touring market; there were lots of corporate organisations, commercial organisations competing, and school bookings dropped off,’ Downs said.

‘It was really hard because often they were doing less than award rates, you know? It was one bloke in his van touring to schools. So Terrapin has had its struggles, but throughout that it consistently delivered.

‘And often when that competition would take out the big private schools, Terrapin would continue to do the small and the remote – the people that wouldn’t see a show otherwise,’ she said.

Continued performances at Tasmania’s schools over decades, coupled with the company’s unwavering commitment to the transformative power of arts in education, means that several generations of Tasmanians have grown up knowing and loving Terrapin and its work.

Michael McLaughlin is the Manager of Programs and Community Engagement at the Tasmanian Museum and Art Gallery (TMAG) in Hobart, where the exhibition Never Grow Old: 40 Years of Terrapin is currently showing. He has witnessed the cross-generational appeal of Terrapin firsthand.

‘It’s been interesting being on the gallery floor and talking to people who are coming in and walking through the exhibition. We’re talking with grandparents who are there with their younger grandchildren and those grandparents are sharing memories – often of seeing shows with their own children. And then the grandchildren are talking about shows they saw last week when the company was at their school, or last month,’ McLaughlin explained.

As a state-owned institution TMAG is a repository of Tasmanian culture, and the current exhibition is not the first time Terrapin’s puppets have gone on show. Previously, some of the puppets TMAG had acquired were displayed in a display called The Power of Change, documenting stories and showcasing heritage objects that spoke to Tasmania’s evolving culture.

McLaughlin said TMAG’s acquisition of puppets in earlier decades reflected a key element of the Tasmanian identity that emerged in the late 1970s and early 1980s.

‘There was the emergence of a more visible artistic community in Tasmania [at that time] and obviously there’s a particular story around Terrapin and the development of the Salamanca Arts Centre precinct. So I think that’s one part of it,’ he said.

‘And particularly with puppetry, the prominence of design – and artisanal design in particular, the making of objects in a contemporary way that engages new audiences – that is something that I think speaks to some strong cultural threads within the Tasmanian story.

‘Design, and particularly the idea of handmade objects, has always been a particularly strong part of Tasmanian culture – and the representation of Tasmania to the rest of the world, really. So the puppets sit alongside furniture makers, jewellers, all those beautiful crafts sort of come together in objects like puppets, which I think has been an important part of the reason for the collection of some of the puppets from Terrapin over the years,’ McLaughlin said.

SHOWCASING TASMANIA TO THE WORLD

Terrapin’s growth over the years has been assisted by consistent state government investment and ongoing federal funding and spurred on by recognition of the company’s work both nationally and internationally – though there was at least one point in Terrapin’s history when the company was skating on thin ice.

When Annette Downs took over as Artistic Director in 1992, the company had just been put on notice by the Australia Council. ‘But I was young enough and stupid enough not to think that would be a problem. We’d just keep going,’ she said.

Rather than continuing to work along traditional lines, Downs made the decision to invest in a new form of puppetry, object theatre.

‘That first year there was no money left to build or design puppets for a last show, so we went to the tip shop and got lots of junk and we did an object theatre show. It was really driven by the fact that there was no money to build anything, but it turned out to be a smash hit,’ she said.

‘It had a terrible name, Up the Down Escalator, but anyway, it went to high schools, then it toured the mainland and the head of the Australia Council came and saw it. At the end of that year – they had just started multi-year funding at the Australian Council – we were one of the first ten companies in the country to be given multi-year funding so it felt like we’d done a U-turn … and that was because of the creativity of the collaborators, the artists, it was a really fabulous team of people.’

In subsequent years, Downs and her team focused on sustaining their education audience while simultaneously focusing on new markets.

‘We were trying to find out, where is contemporary puppetry going? What are the other markets? How do we get out of Tasmania? And that was the hardest thing ever, because in those days Tasmania was dagsville. It was pre-Mona … and nobody on the mainland bought shows that were made out in the regions, it just didn’t happen.’

In a classic example of leveraging Australia’s deeply entrenched cultural cringe to their advantage, Terrapin put in a bid to showcase their work at UNIMA, an international puppetry festival in Europe, and were successful.

‘It cost an arm and a leg, but it’s that thing of once you’re seen to make it somewhere else then you suddenly seem more attractive to mainland presenters,’ Downs said.

The popularity of Desires meant that ‘local media took us more seriously because we’d been overseas,’ she continued.

Mainland presenters also started to take more notice. ‘It just seemed that we then had some cred because we’d been selected to represent Australia at this international conference, so then we were able to get more national touring as well.’

Thanks to the commitment of Jennifer Davidson, its founder, as well as Downs and subsequent Artistic Director Jessica Wilson, Annie Forbes and Frank Newman, Terrapin’s reputation in Tasmania seems very much assured.

As Sam Routledge puts it: ‘Terrapin is very much a part of Tasmania’s cultural identity and has been sustained thanks to the previous Artistic Directors it’s had, and it is a great survivor, because companies have come and gone and Terrapin has remained.’

Nationally, the company’s future also looks secure thanks to Terrapin recently joining the National Performing Arts Partnership Framework alongside such companies as ILBIJERRI, Back to Back Theatre, Dancenorth and Windmill.

‘Terrapin being brought into that new framework alongside other new entrants such as Back to Back and Windmill and Griffin is really important for Tasmania, I think. How wonderful that Terrapin can represent Tasmania in that framework as a company that champions puppetry and work for intergenerational audiences,’ Routledge said.

‘We just had A Not So Traditional Story by Nathan Maynard at the Theatre Royal [in Hobart] and in Theatre North in Launceston, and it was our biggest selling show in the records that we have in terms of numbers and box office. This is a new Australian work by a palawa writer and it basically sold out.’

Once COVID travel restrictions ease, the company plans on a return to international touring as soon as possible, with Routledge explaining that Terrapin is always happy on the road.

‘We did an OB, an outside broadcast, at TMAG yesterday and someone said, “Oh, why is the company called Terrapin?” And we don’t know exactly but we think the title Terrapin is because a terrapin always takes its home around on its back.

‘We make our work to tour efficiently, and so once those international markets start up again, if we’re offering a high-quality product, and we’re making it competitive in terms of what the freight cost is and the number of people that perform it, then we’re always going to be in with a good shot with those international presenters,’ he continued.

In many ways, puppetry is a universal language, and the delights of the artform are increasingly popular in our digital world.

Learn more about Terrapin Puppet Theatre. The exhibition Never Grow Old: 40 Years of Terrapin is showing at the Tasmanian Museum and Art Gallery until 31 October 2021.