Theatre Review: I and You

Poetry and friendship: emotions run deep within the flood of words.
Nerida Dickinson 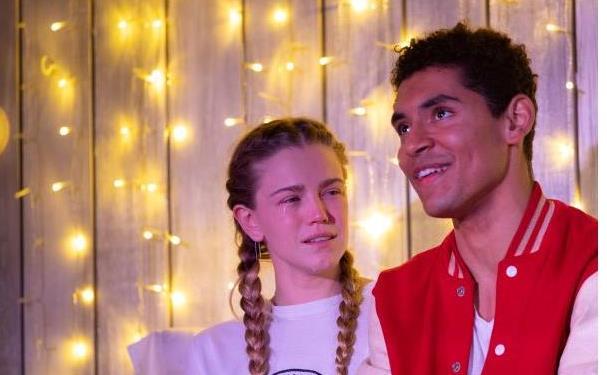 Caroline wants to graduate with her high school class but her life-long health problems have worsened, her world shrinking to her bedroom as she waits for a liver transplant, ‘I and this mystery here we stand’. Anthony-from-school bursts through her door bearing a last-minute homework assignment, a copy of Leaves of Grass. Outraged at his intrusion, Caroline rejects his pleas to work on a shared assignment, rebuffs his attempts at friendly conversation and mocks his earnest enthusiasm for Walt Whitman. Anthony is undeterred and pushes her to examine the poems and, through them, herself. Caroline reluctantly agrees, her acceptance conditional on their exchanging real personal truths. He manages to draw out her fascination for capturing tiny details on camera, her angry resignation of pending death and her partiality for air piano riffs. An unexpected friendship bond is formed in a few intense hours.

Sophia Forrest bounces between her character’s fundamental vivacity and bravado and sudden bouts of pain and weakness. She captures Caroline’s pent up volatility without cheesy tugs at heartstrings. As the unlikely poetry buff, Darius Williams’ Anthony meanwhile, charms his way through her defences. The pair time their verbal and physical interactions to maintain a lively pace, with Williams the tolerant foil to Forrest’s emotional intensity. His monologues are punctuated by poetry and analysis,

Lauren Gunderson wrote this script in 2013 and the restless nature of youth culture continues to rush by the mainstream at its accelerated pace, resulting in sporadic anachronisms such as high school homework needing a glittery poster and smartphone video recording. It’s not known whether director Kate Cherry has followed the original script or installed content updates; nonetheless I and You flows smoothly around these slightly jarring distractions. In its North American setting, racial division is acknowledged in mild discussions of cultural appropriation but larger social issues never overshadow the fluctuating personal relationship.

Theatre 180 brings big ideas and old souls to its small stage and young cast in I and You. Cherry elicits strong performances from Williams and Forrest, bringing thought-provoking, heart-warming drama to a broad audience.

I and You
By Lauren Gunderson
Presented by Theatre 180
Directed by Kate Cherry
Starring Sophia Forrest, Darius Williams and Caitlin Beresford-Ord (voiceover)