Emily Clements is stranded in Vietnam. She’s on the back of a motorbike with a man who is practically a stranger. He’s taking her through a mountain pass, against her will, to meet his family, determined that they’ll be and live together. Terrified, Emily has no choice but to acquiesce, to submit, in order to minimise harm. This is just one of the experiences highlighted in Melbourne-based writer Emily Clements’s memoir, The Lotus Eaters, a sharp detailing of her time spent living alone in Vietnam, post-Year 12, following a falling out with a close friend. Taking a job teaching English to Vietnamese students, her attempts to bridge the gap between loneliness and finding a sense of community in this new place lead her along a spiral of recklessness. Through a series of horrifying, dizzyingly dangerous encounters, Clements explores the fraught relationship that young women can have with their sexual identity, delivering a mature reflection on her own life that is pertinent to the current social climate.

The Lotus Eaters explores the complex dance between independence and empowerment, and vulnerability; between female desire and sexuality, and objectification. Clements’s experiences in Vietnam – some favourable, the majority decidedly not so – are uncomfortably frank, distressingly raw. The majority of the time, Clements handles tricky subject matter with grace, making body, gender and equality discussion accessible and digestible for the everyday reader. The reader learns alongside Clements as she finds her autonomy and her voice, and every victory, however small or seemingly hard won, is a relief. Her writing is green, but readable. At times, however, it leans towards heavy-handedness.

The Lotus Eaters contributes to the discussion around sex and desire, gender, and female friendship for young people. It would be my hope that a young person thinking of heading overseas would read The Lotus Eaters and not so much be dismayed by the seeming dangers of being alone in a foreign country, but use it instead as a framework for understanding their own relationship with independence and autonomy, as well their relationship with their body, their sexuality, and their desires. And while this memoir sometimes feels like a rushed attempt to join the current conversation around women, sexuality and sexual empowerment, that doesn’t undermine the significance of its message, or indeed the power of Clements’s voice. The Lotus Eaters rather signifies the development of a strong memoirist, one on whom we should certainly keep a keen eye. 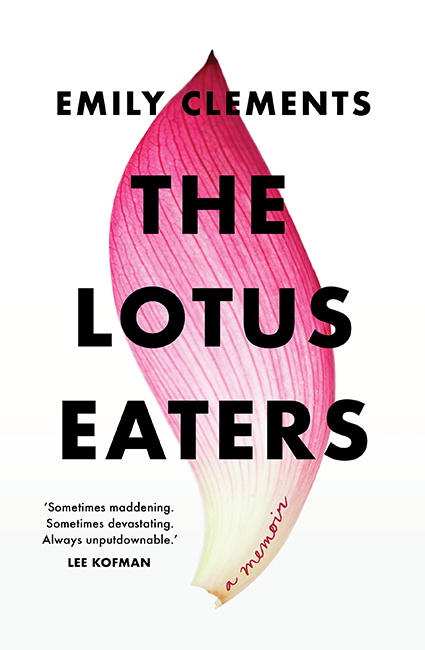