Drawing gets a rethink at the National Art School, but does the work rise to the level of the rhetoric, even with disgruntled controversy over its winner?
Gina Fairley
[This is archived content and may not display in the originally intended format.] 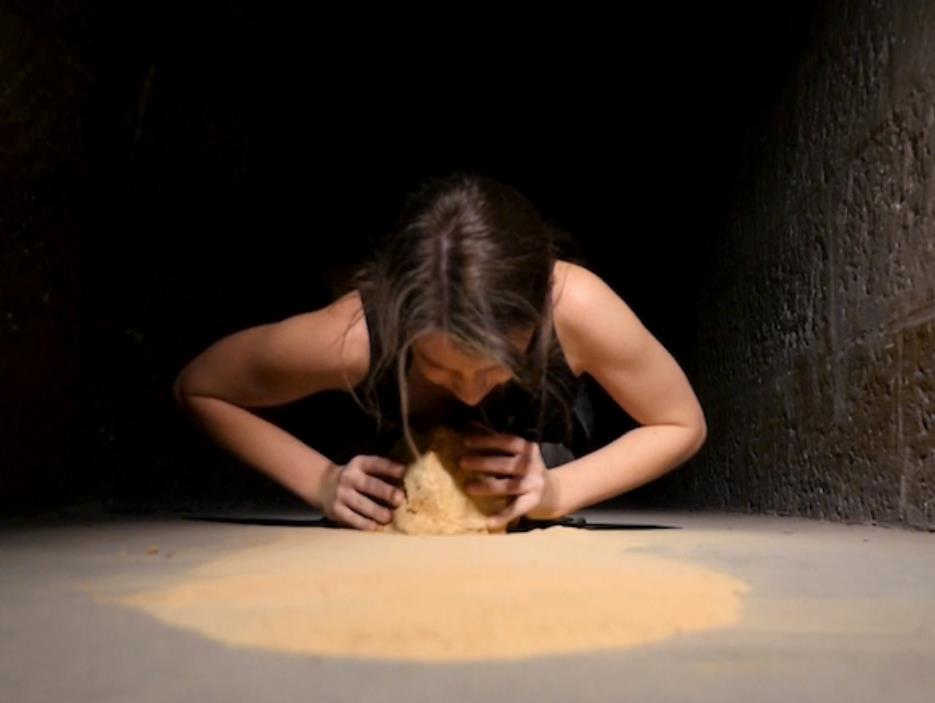 Expectations were high for this year’s Dobell Drawing Prize, returning for its 21st edition, and the first to be presented at the National Art School. NAS Gallery took on the responsibility of hosting the Prize after its exhaustive run at Art Gallery of NSW, extending the event with a drawing symposium and week-long festival.

Where better than to punch out the parameters of drawing in our times than an art school? And with the keynote speaker for the symposium the unconventional provocateur Mike Parr, a fresh discussion on drawing was assured, but did the Prize deliver?

It must be remembered that the biennale, drawing prize and symposium are separate entities. The very notion of embedding the prize in a think-tank for fresh ideas should have percolated a more rigorous, and arguably experimental, selection of finalists for the prize. It felt too exhaustive – like everyone could be part of the conversation – and with 57 finalists, sprightly discourse quickly lost focus.

But, perhaps I am being unnecessary harsh. The reality is that the NAS Gallery is a big space, and the 2019 Prize received a record 788 entries. It would seem, however, that the winner chosen did tick the ‘experimental’ box and rile a few.

Justine Varga, who came under the spotlight in 2007 when she won the Olive Cotton Photography Prize and whose winning entry was accused of not being ‘photographic enough’ faced the same storm this past week.

Varga describes her winning drawing, Photogenic Drawing, as ‘an artwork that ruptures any clear distinction between photography and drawing’. She added that she has always seen her photography practice as ‘drawing with light’. Varga studied both drawing and photomedia at NAS.

The piece was created in a darkroom using light sensitive paper, which Varga daubed with paint and drew into over a long exposure. She added: ‘This print is therefore the making visible of a drawing practice that is at once physical and chemical, autobiographical and contingent, painterly and photographic.’ 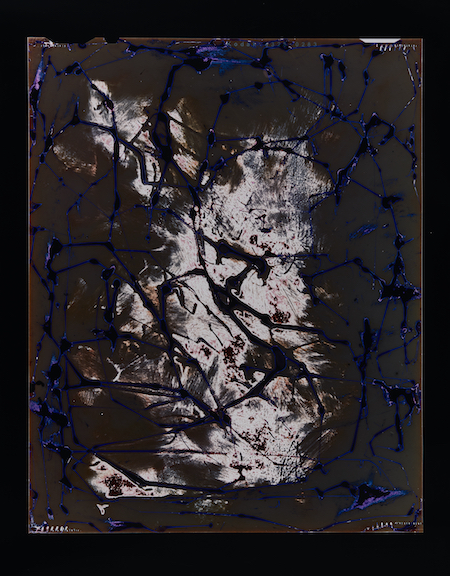 Fear of the unknown or the new has plagued societies for centuries. Parr noted in the prize catalogue that the path of Australian art history has traditionally been blinkered, preferring the sunny view where ‘everything else in its off-colour ambiguity was to be held at bay.’ He could well be pointing to the reaction to Varga’s win.

2019 judge Ben Quilty made the point that drawing is a fundamental part of many visual art practices. He added that Varga ‘uses drawing in the most meaningful and sophisticated way,’ and that it was ‘sophisticated 21st century drawing and a deserved winner’.

Her works sits in the upper galleries alongside Becc Orszag, a sensitive graphite pencil and gold leaf drawing on paper presented in a Rorschach style, and drawn from her memories of growing up in a religious cult, and the work of Toshiko Oiyama, who is interest in the constant state of transience – something that can’t be articulated verbally.

Varga was not alone in pushing the boundaries; the Dobell this year included animation, textiles, sculpture and even performance. While an enthusiastic critic damned Varga’s efforts in the guest book (pictured top) – along with other social media commentary – the same critic also pointed to the work of Maryanne Coutts as an example of getting it right.

A digital tablet presented in a frame stereotypical of the Dutch masters, Coutts’ images of her mother over a five week period on her death bed are undeniably beautiful. Literally scanned drawings presented in slide-show style as an animation on a tablet, there is a use of technology but not an experimental rethinking of drawing at play here – regardless of their skill and embedded emotion as drawings.

Coutts’ work hangs within sight of Fiona Currey-Billyard’s work, which re-imagines records of the Australian Border Deaths Database, a print made from an iPad drawing by Alan Jones, and two lightbox drawings by Locus Jones. Elsewhere in the gallery Brooke Leigh presents drawing as a performative video (pictured top), where the action of gesture and mark making is presented as the final work, and M.Bozzec mimics an ink jet printer.

This is powerful contemporary drawing at its best. 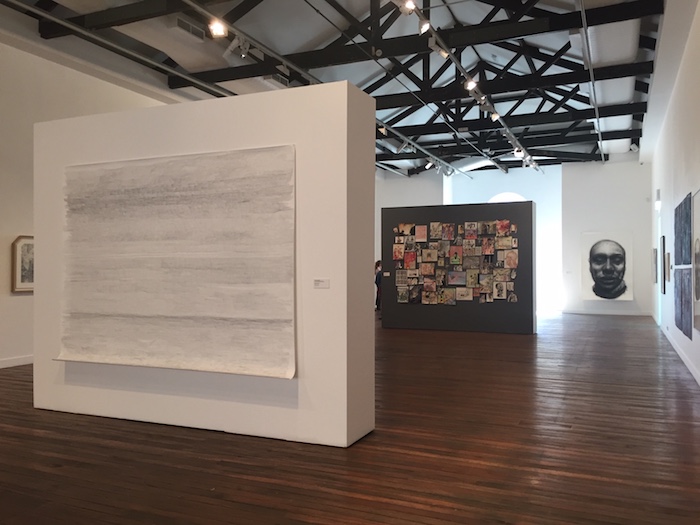 But you don’t have to embrace technology to be ‘new drawing’. One of my personal favourites among the finalists is the work of Wendy Murray, which is the epitome of traditional drawing. However she, like Leigh, has turned drawing into a performed experience.

Over the exhibition’s duration Murray is located in the gallery where she is turning her studies of Redfern into a more organic mind map, that is less about location and more about association. It is a beautiful piece. 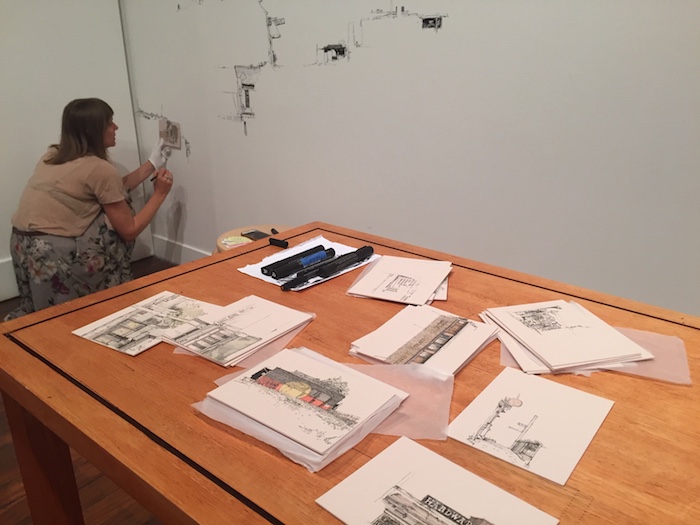 Wendy Murray, Every Building on the Redfern Strip (2018), pen on wall, courtesy the artist. Photo: ArtsHub.

Steven Alderton, NAS Director and CEO, said: ‘The Dobell Drawing Prize has always inspired the question, “What is drawing?’’’ This is also broached by  Leonie Andrew’s drawing in thread, Suzaanne Archers’ sculptural drawn masks, among others.

Additional highlights include entries by Tanya Chaitow, Amy Dynan and Helen Eager. Then there are drawings that are airless in their imagination, despite their technical prowess, and a few thin entries by more senior artists that did little to extend what drawing might or could be in their hands.

Speaking with countless artists as I do, I am always heartened by the role drawing plays – and while it may not always manifest in the finished art work, the respect for its role, conceptually, is uncontested. For this reason alone, to stop and look at how drawing continues to have an impact is a necessary role that this national prize plays. I am pleased that the National Art School has embraced the challenge to keep pushing those dialogues forward.