Nicola Gunn brings us a kind of meta-theatre with her new work.
Liza Dezfouli
[This is archived content and may not display in the originally intended format.] 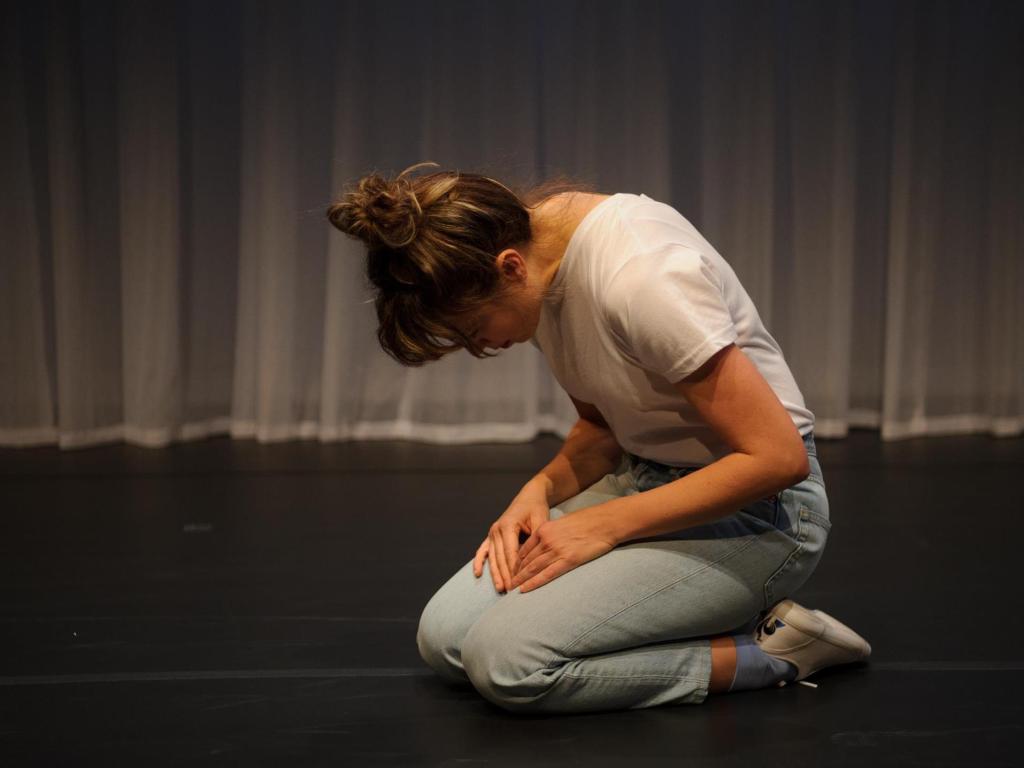 Nicola Gunn in Working With Children. Photo by Sarah Walker.

Working With Children opens with Gunn engaging in physical performance – taking a deathly serious approach to play, carrying out actions in the dark as though they constituted shameful acts; asking whether private, solitary pursuits well within the range of normal human behavior mightn’t be so damaging were they admitted to in public.

The range of restrictions and regulations designed to protect children from adult behavior when working with them got Gunn thinking about how, then, if you’re working with children on creative projects, does art flourish freely? Children stand for lost innocence, for vulnerability, as blank slates so easily damaged by adults. Yet they can be fearlessly honest and blunt. Are we also needing protection, afraid of what kids may say or do?

Set against a soundscape of birdsong, reminding us of the something pristine, with geometric shapes projected on a curtained backdro, Gunn repeats a choreography of movements. All the while she tells stories, using her voice in a measured way, softly commanding us to listen.

We are invited to wonder about the effect of story on the body with these apparently random anecdotes, which may or may not be true. Is the performance art – her energetic movements – telling the truth? They don’t seem to match the narrative. Are they telling us how we inhabit patterns of conventional behavior in order to avoid ourselves? Gunn makes the audience complicit in creating meaning in the work. Background noise grows to drown out the stories or easy listening music belies the often awkward nature of the narratives. Is misalignment itself telling the truth? The smallness of detail can render the stories often exquisitely funny. Details about things like lemon ice-cream may be what a child may recall from a day’s events.

Gunn explores ideas around working with children, rather than relating any actual real-life incidents. She does mention the creepy and condescending interview Michael Parkinson conducted with a young Helen Mirren back in the 1970s. (Mirren maintained her dignity throughout, showing Parkinson up for the arse he is.)

The stories occasionally use banality as gentle barbs. But what happens when a conversation goes down a dodgy or darkened alley? Consider Marten (with an ‘n’– he’s European), a middle-aged white man engaged in a panel conversation or workshop with teenagers, talking about sexuality. There’s a misunderstanding about the use of a flesh-light (a sex toy). Marten is forced to leave the youngsters concluding he must have a tiny dick rather than risking an explanation as to how the flesh-light is employed.

Working With Children operates on various levels. It offers neither aptness nor resolution, yet all is tightly controlled. ‘Lightly sketched but fully drawn’, you could say. On closing Gunn leaves us with some remarkable visuals; when discourse fails, we are brought back to wonder. Take your time to delight, she’s saying. What are these things? What might they mean? Kids have that over us: openess to wonder and delight.

Nicola Gunn is a singular voice in Australian theatre, her imaginative, absurdist work is witty, weird, conceptual and intellectually rigorous without being pretentious. If you enjoy the work of dancer/choreographer Atlanta Eke, you’ll certainly appreciate this latest from Gunn.