Spencer Tunick on lending his signature aesthetic to global activism

ArtsHub speaks to New York-based photographer and installation artist Spencer Tunick about global activism and what it's like to direct a crowd of naked people for art.
Andrea Simpson
[This is archived content and may not display in the originally intended format.] 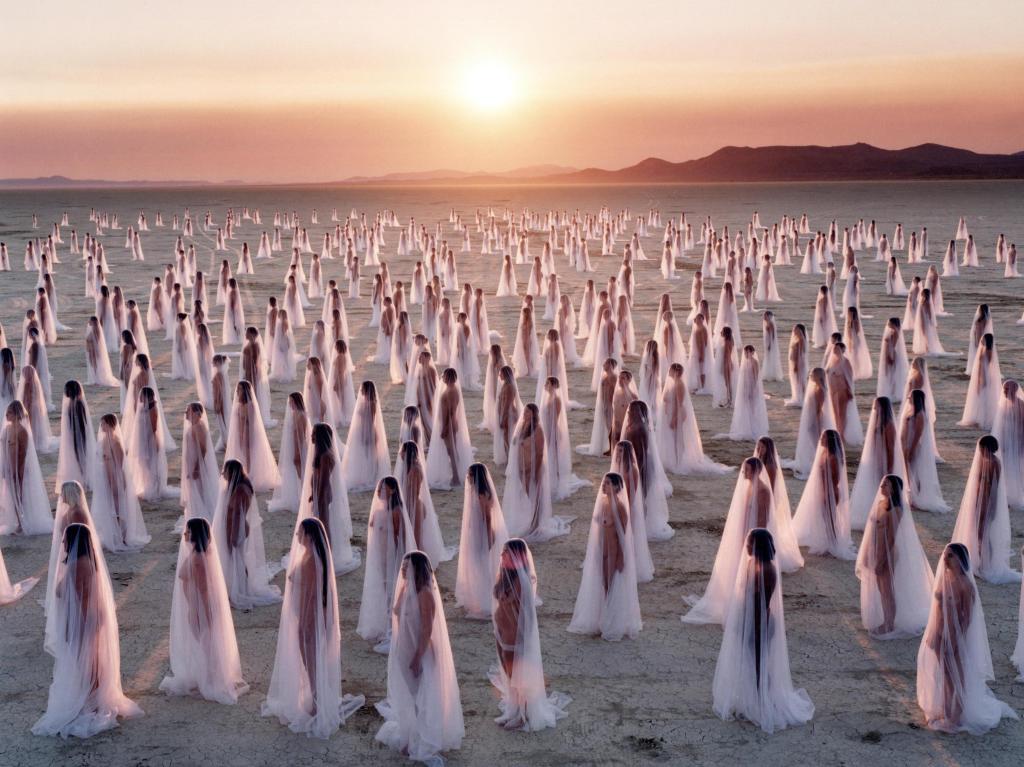 When asked about his instantly recognisable aesthetic, world-renowned installation photographer Spencer Tunick reflected that ‘mostly it’s not aimed at anything.’

‘Mostly it’s me expressing myself, and doing works for myself. My work is referencing Art History, or it’s referencing personal things that I’m going through – to put a label on it.’

A New York native, Tunick has also traveled the world for the last two decades photographing incredible scenes that utilise hundreds, at times thousands, of naked bodies as raw material, and juxtaposing this collective identity against a chosen landscape.

He has realised photographs in some of the world’s most extraordinary natural and urban locations, such as the Dead Sea in Israel and gothic landscapes like San Miguel de Allende, Mexico. The scale, models and method of his work have garnered a global fascination, while also indirectly highlighting environmental and social issues.

Tunick has gone on to collaborate with not-for-profit groups to further humanitarian and environmental causes.

‘On the rare occasion, I have been approached by Green Peace. I was approached by a Pro-HIV magazine, POZ magazine. There are some things you can’t turn down,’ he told ArtsHub.

‘You just try to make it work because there’s a small window of them being able to attach a message onto the work. In my head I’m working with that message, but also on a totally different level I’m working within my expressive ideas of what I want to achieve.’ 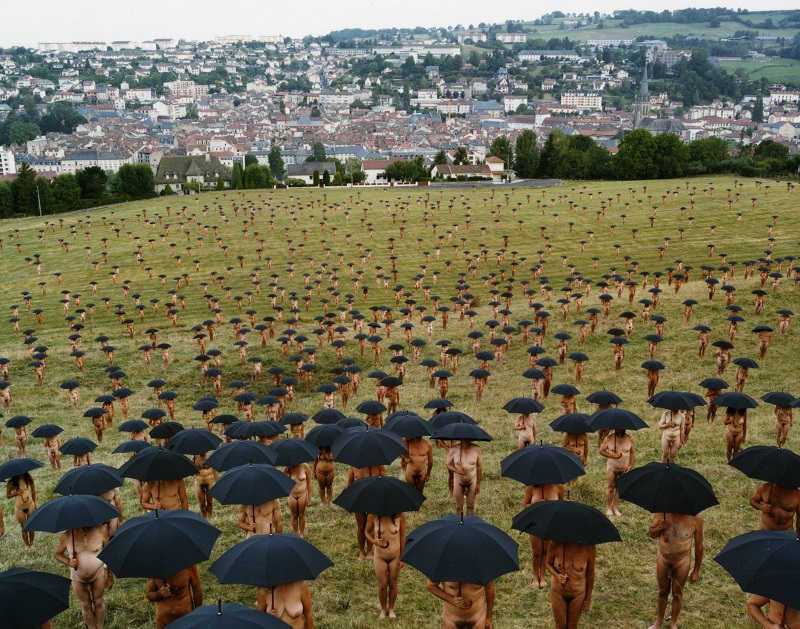 It’s working within this dual-state that has allowed Tunick to achieve a dynamic and holistic approach to his art making.

‘In a way, it’s a collaboration with different results coming out of it. I can attach myself, firstly and closely, for the work to raise attention for the environment but at the same time I might be dealing with Darwin’s Theory and over-population.

‘I might be dealing with all these issues – it’s a certain specific pro-active push against the constraints of, I would say, corporations and governments that are against climate change,’ he said

Tunick will be traveling to Melbourne in July for Return of the Nude at Provocaré Festival of the Arts, held by Chapel Street Precinct. He said: ‘I think that Australia’s one of the most un-conservative countries when it comes to the body outdoors and in public places than any other country, except Mexico and Spain.’

‘It’s very press worthy to say, “Yes, I do choose to work in front of iconic locations”, but what I’m trying to do is create a symbiotic relationship between the bodies and the background. If it happens to be coming up against something iconic such as the Opera House or on Aletsch glacier then I’m OK with that. Often my favourite works are works that are off the beaten path where my work sort of creates that moment of interest and of longevity,’ Tunick said.

‘Then I also have to try to get permits and I have come across some difficulties because the body in the US outdoors and in public space…it’s very difficult to get permits. That’s one of the reasons we appreciate Australia, and the appreciation of the body as art.

When talking about using public spaces as his canvas Tunick said: ‘My intention is not to work with a controversial angle; just the nudity alone makes the work controversial.

‘It can be difficult to work. In most of the United States I could be arrested doing this so that’s why I am very happy when cities in Europe, South America, in the Scandinavian Countries allow me to work – that’s why I’m very happy to take the work abroad.’ 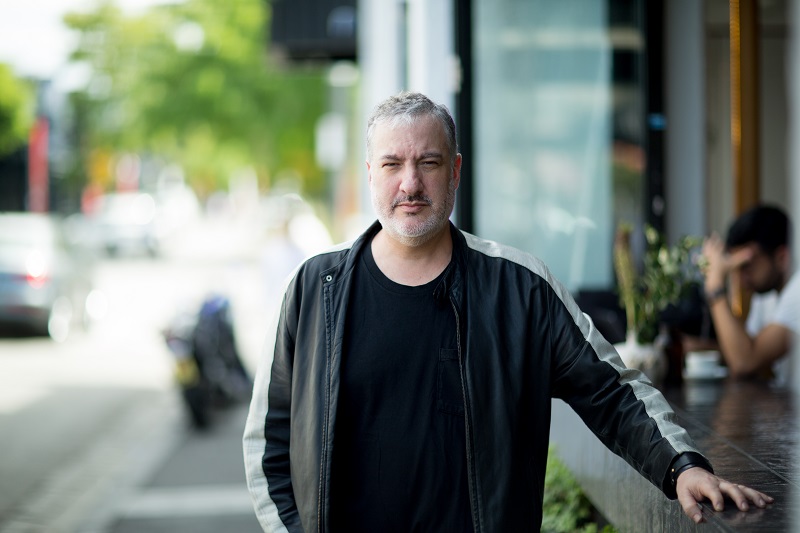 How to photograph a crowd

‘I think that gave me some practice. I didn’t imagine my classmates naked but I did imagine them floating. And sort of forming formations – often when we were at drill practice kids would faint and just fall on their backs, it was very disturbing.’

It’s about community, not nudity

‘There is definitely a communal aspect to the work. You know you can’t experience this in many different places, especially being nude among friends and neighbors.’

‘It’s working with the body, not so much as a celebrity, but the body as community, as abstraction – an organism where the whole essence of the work is not about “look at me,” it’s about look at the work we are creating. And I’m not saying, “Look at this”; I’m actually trying to make a solid artwork where I am expressing myself. But the people are also expressing themselves. I think that’s a very unique thing that your participants are advocates for your work and also the process is very democratic,’ he said.

‘It’s very collaborative; it’s creating a new community – even though it’s temporary. And I think it does have people interacting with each other without phones. Creating an art work, so I think it’s a very refreshing act in both cases: to make a work that’s a communal effort where everyone is working together. And the object is not about celebrating the image of one’s self but the action of one’s self to collaborate.’

Phones distract – and extend the work

‘I think that moment without your phone is quite wonderful. Of course when people go home, if people are painted certain colours then the selfie cameras come out, and then it becomes a different aspect, and a different moment of the work – which is not the art but the aftermath,’ said Tunick.

‘Actually, I’d like to do one work where everyone has phones, or work that into the work – maybe outside of Facebook headquarters with all the employees of Facebook, and get them all fired all at once,’ he joked.