Sondheim's Follies from National Theatre Live perfectly presented.
Liza Dezfouli
[This is archived content and may not display in the originally intended format.] 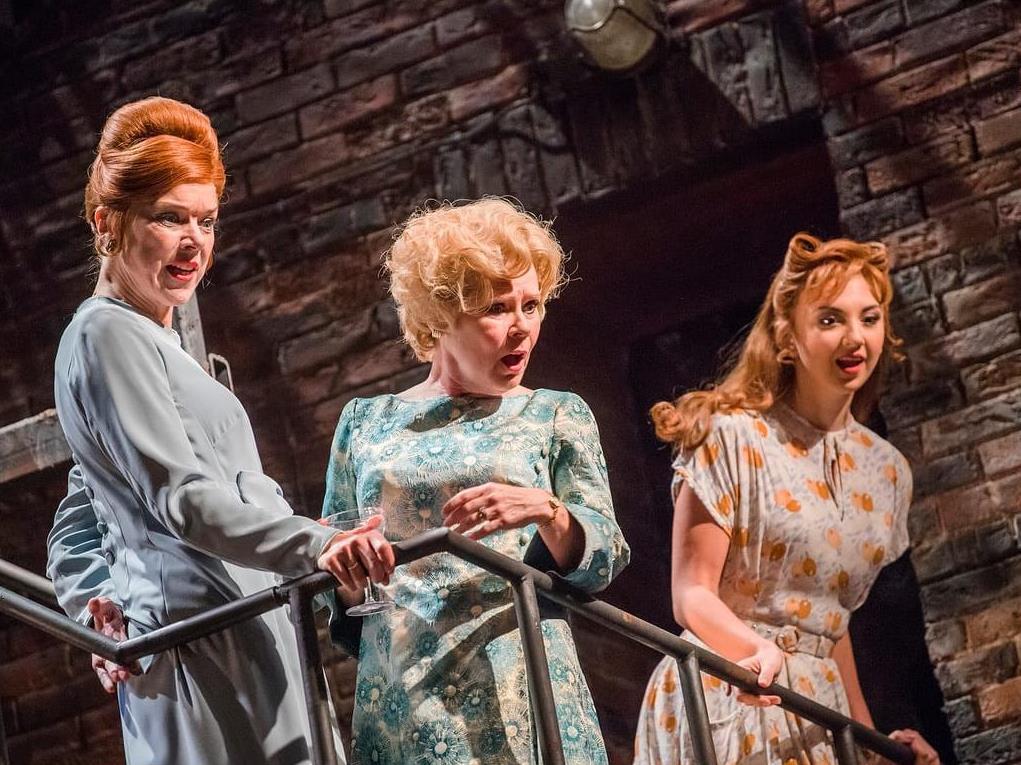 Sondheim’s Follies was seen for the first time in 1971. National Theatre Live’s production of Sondheim’s love letter to the musical comes 30 years after the show was last put on in London. Accompanying the screening is a short film with clips from over the years featuring Sondheim talking about Follies; he describes it as a show without a plot: ‘just people talking at a party.’

The story is simple, based around the cast of Weismann Follies (based on a real company, the Ziegfeld Follies), performers from a showgirl chorus celebrating the All American Girl, reuniting 30 years after they last performed, just before the Weismann Theatre in New York theatre is about to be pulled down. Two affluent couples, Buddy (Peter Forbes) and Sally (Imelda Staunton), and Phyllis (Janie Dee) and Ben (Philip Quast), come to re-examine their lives when it becomes apparent that Sally still holds a torch for Ben, with whom she had an affair before marrying Buddy.

Director Dominic Cooke, here directing a musical for the first time, says in interview that it took a year to cast the 38 performers for Follies: the four older couples are shadowed by luminously festooned versions of their younger selves (Fred Haig, Alex Young, Zizi Strallen and Adam Rhys-Charles), a device which lends poignancy and functions elegantly in the telling of back-story. Cooke gives all the showgirls a younger version of themselves. With this convention he’s suggesting that each of us is haunted by the past. When young and old sing and dance together the emotional impact is intense. Things changed after the 70s, the musical gave way to the rock opera, so we feel nostalgia, perhaps, for the form, and for a time when we were innocently entranced by glamour rather than obsessed with celebrity.

And the performances are stunning. This production doesn’t miss a step (literally as well as metaphorically). Imelda Staunton (last seen as Martha in National Theatre Live’s Who’s Afraid of Virginia Woolf) shows unbeatable range and nuance. Her understanding of how she has deluded herself, about Ben and about husband Buddy, when she sings ‘Losing My Mind’ is heartbreaking.

In exploring universally human themes: dreams of unrequited love, wanting what one hasn’t got, yearning for the past, lives unlived and the realisation that one’s remaining years are finite, Follies causes us to care about these basically unremarkable people. Perhaps we mightn’t care as much nowadays as when the show first came out: in our current climate of extremes of privilege versus severe and growing inequity, a story about the yearnings of well-off North American white people might not affect us deeply. But the performances here are exquisite and then there’s the music! The songs and the singing of them will move you.  Many of the songs, ‘The Road Not Taken’, ‘Broadway Baby’, ‘I’m Still Here’, for instance, have become much-loved standards. ‘I’m Still Here’ is given a satisfyingly punchy treatment by Tracie Bennett, the girl who’s had it tough but stayed single and free. Each of the former showgirls gets her moment and they’re all remarkable, especially when you learn that classical soprano Josephine Barstow is treading the National Theatre’s boards for the first time at the age of 78. ‘Broadway Baby’ sung by Di Botcher is a delight.

Dimitri Weismann is played with much cynicism by Gary Raymond; his Weinstein moment occurs when, talking about the ambitious young women who turned up to audition, he says – ‘I could have any of them with a smile.’ Exploitation of women features as a subtext, with this comment and with the men’s casual acceptance of having ‘played around’ on their wives. While the men sing ‘Waiting for the Girls’ it seems the women have been waiting for their men’s emotional availability.

Costuming is something to marvel at (Swarovski crystals feature amongst the feathers), the set with its crumbling brick walls, the choreography by Bill Deamer and the orchestrations (musical supervisor is Nicholas Skilbeck) – all world class stuff beautifully recreating a time where spectacle wasn’t so reliant on technological whizz-bangery. The whole damn thing’s a delight.

When people tell you they don’t like musicals, point them in the direction of a Sondheim show; all of them offer superb entertainment while expressing complex feelings, moments of wisdom, honesty and a whole pile of life, perhaps this one most of all.