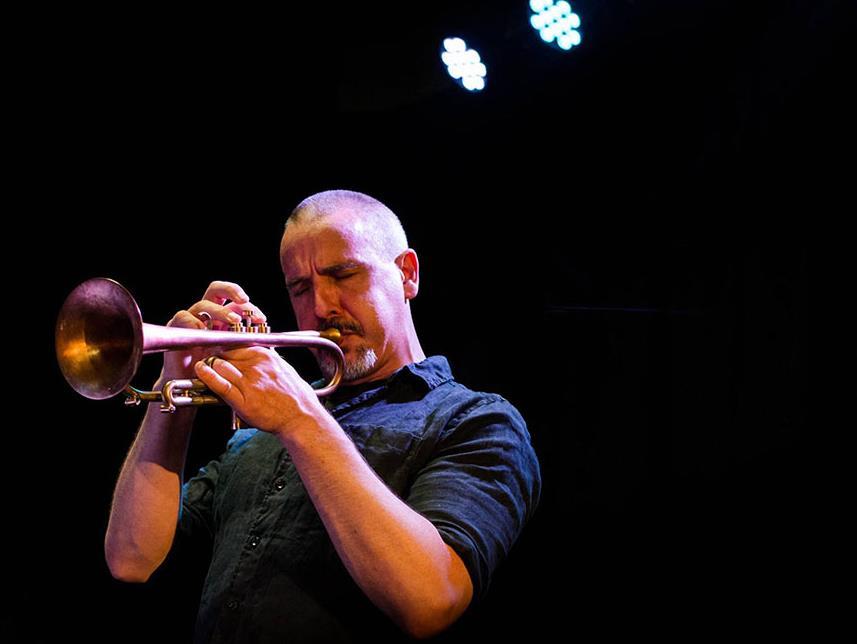 While all creative artists are primed for the ups and downs of taste, recognition, income and the like — it just goes with the territory — for Australian artists who play music, this territory has become a really slippery slope. ACDC’s rock might be firmly anchored at the summit of Aussie culture, but most of us roll like Sisyphus.

This is because the rhythm of life’s changes is so fast (maybe we should call this capitalism’s “bebop” period), and because the world of work inhabited by musicians is locked into this rhythm. Its touch might be light for a few, but for most of us it’s something more akin to the thrust of the Industrial Revolution.

It’s also because, in Australia, a concerted ideological assault on an arts culture that, in doing its job well, has the audacity to express views independent of the forces of power and privilege, makes an already difficult situation that much harder.

This is not to say that the arts don’t matter here anymore. The intense reaction against cuts to Radio National music programs reminds us of just how much they do — the reaction to all the celebrity muso deaths in 2016 does the same. And the stats prove it; studies like Arts Nation (2015) or Deloitte’s “Live Music Report” (2011) document what Aussies believe about the arts and give detailed accounts of participation rates (my favourite: more Aussies go to galleries in any given year than to the football!).

But the fact remains that the pace of change in the age of globalisation, and neo-liberal reaction to it, conspire to make this moment a struggle just to hang on.

Festivals matter. They celebrate the assertion of a public communal spirit over the private; the triumph of the real over the virtual. In defiance of tendencies that strongly divide us — political values, religious beliefs — festivals bring us together. They have economic value, too: think, “the MONA effect” and its offshoot music festival, MOFO; think, Iceland’s strategic investment in its cultural sector (now the second largest contributor to GDP) … the list goes on and on.

The Wangaratta Festival of Jazz and Blues has been a luminous example of this kind of success for over 25 years. Led expertly throughout by Adrian Jackson, Wangaratta has resonated loudly around Australia, the region and the globe.

What’s true about festivals for the community at large is even truer for the music community itself. Wangaratta offers Aussie musicians great audiences, a high-profile place to present new work, occasions to collaborate with peers; and, vital for any artist, the chance to “internationalise” our practice by working with artists from other countries — the benefits of which flow in every direction. 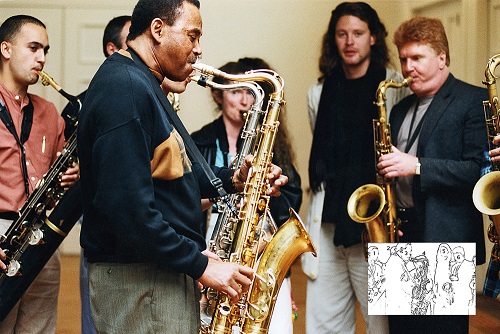 The photo shows this at work. It was taken at the rehearsal for Odean Pope’s Saxophone Choir project, which featured at Wangaratta 20 years ago this year (see the key in the bottom right-hand corner of the pic 1) Adam Simmons 2) Lachlan Davidson 3) Odean Pope — behind him on the silver tenor is Anton Delecca 4) Sandy Evans 5) Elliot Dalgleish 6) Andy Sugg 7) Julien Wilson — Ian Chaplin is out of frame).

This was one powerful gig. I still remember the energy in the green room before we went on stage! The large audience felt it, too (a standing ovation, I recall). It was an occasion to present works not heard before in Australia, to collaborate with national peers on a scale that rarely happens here, and to reach out internationally: reach out, in fact, to jazz’s foundation narrative — Pope was in Max Roach’s band, Roach was Charlie Parker’s drummer.

This gig exemplified the very best of the festival experience; but — and this is the point — gigs like this happen all the time, at every Wangaratta festival.

So, it was with well-rehearsed bemusement that we learnt on Black Friday that the triennial Federal funding sought by Wangaratta would not be renewed, but would instead be replaced by an allocation covering this year’s festival only. It would seem that — even in propitious times for the genre — festivals aren’t immune to a few ups and downs of their own. And for a quick reminder of why this funding decision is such a downer, here’s British historian Eric Hobsbawm (himself a big jazz fan):

Festivals are, like opera, not basically rational enterprises in economic terms. They cannot exist purely on ticket sales, any more than the Olympic Games or the football World Cup. Like opera, festivals, particularly costly ones, are hardly possible without public or private subsidies and commercial sponsorship.

Most recently, as if to rub salt into the wound, we learned that Jackson, the person responsible for turning Wangaratta into a Grand Slam event on the international jazz circuit, would not be invited to continue as musical director beyond 2016.

The current challenges facing Aussie artists and the great contribution made by festivals to their working life (and to the lives of local and national communities), are well-known to those charged with the duty to invest public funds in artistic endeavour. Is it too much to ask that these public servants — and the boards of our major festivals — might reflect again on Australia’s great achievements in jazz (which include the longest running annual jazz convention in the world, an illustrious history of soloists and groups punching way above our weight globally, and Wangaratta itself, a 25-year-plus success story) and not only stabilize support for the Wangaratta Festival of Jazz and Blues, but strengthen it? I hope not.

Now, back to pushing that rock …

Dr Andy Sugg is a Melbourne-based saxophonist,​and a musicologist with long associations both with the Victorian College of the Arts, University of Melbourne, and the Sir Zelman Cowen School of Music, Monash University.