Profoundly introspective with a core affection for the music of another era, The Aliens is both discomforting and refreshing.
Glen Falkenstein
[This is archived content and may not display in the originally intended format.] 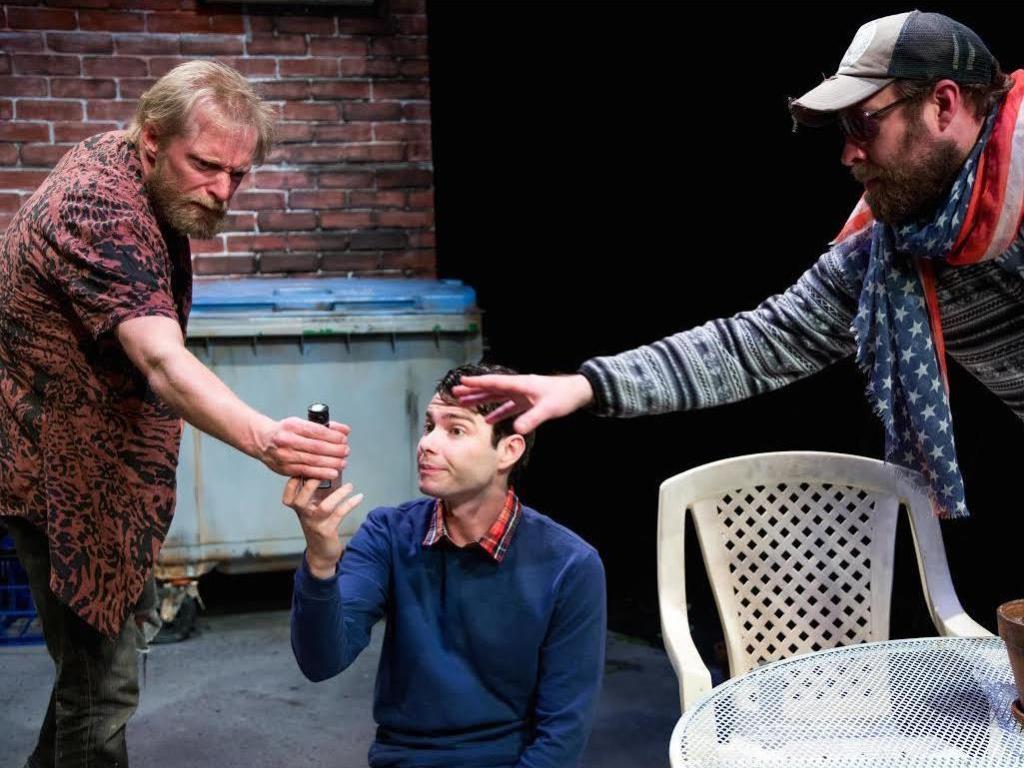 Offbeat in every sense of the word, The Aliens enjoyably draws its audience off-centre with the play’s unconventional style, at times both discomforting and refreshing. Filled with intermittently jarring moments and deliberately languid pacing, it calls on the audience to be introspective about its unusual characters, while savouring a few great moments of music here and there.

Set in the backyard of a café, a million miles from the rest of the world and even the people inside drinking coffee, two very unfazed slackers KJ (Ben Wood) and Jasper (Jeremy Waters) wile away their days, surrounded by a few chairs, tables and a massive dumpster they have to climb over to enter their little sanctuary. New to the café, teenager Evan (James Bell, in a role originally filled by Dane DeHaan) wanders outside occasionally, gradually getting to know the two friends, learning about their lives and revealing some details of his own.

Combining Beckett’s tepid pacing and Wilder’s habit of depicting seemingly inconsequential yet highly significant events, Annie Baker has crafted a play with three characters who are very engaging when and only when they play off each other. The quiet moments shared on stage or the occasional brief monologue are never as enjoyable or profound as the emphatic and biting dialogue the three misfits so often interchange, speaking about anything from their personal lives and failures to each character’s favourite music.

Wood as KJ is the most humorous and captivating, a vehement performance whose intense sequences are nicely complemented by KJ’s more affectionate moments with Evan. Both Wood and Bell have highly enjoyable musical interludes at different moments in the play, a nice contrast to the often stretched pacing.

The more downcast or unhurried moments of the play, of which there are many, as was the clear intent of the writer, provide some space for observation and absorption by the audience, though linger too long in parts, the enjoyable dynamic between the characters often making way for lukewarm action. These moments by no means override the play, the character’s idiosyncrasies come to the forefront and are nicely expressed in a production where aside from the timing, there is very little to distract from the well-drawn characters.

Quietly and often profoundly introspective with a core affection for the music of another era, The Aliens is an easily relatable journey both back in time and into our present, where despite the setting’s palpable familiarity you will feel like you are in another world.