Australia's protectionist law is pushing trade in culturally significant Aboriginal Art overseas and weakening the local market.
Jane Raffan
[This is archived content and may not display in the originally intended format.] 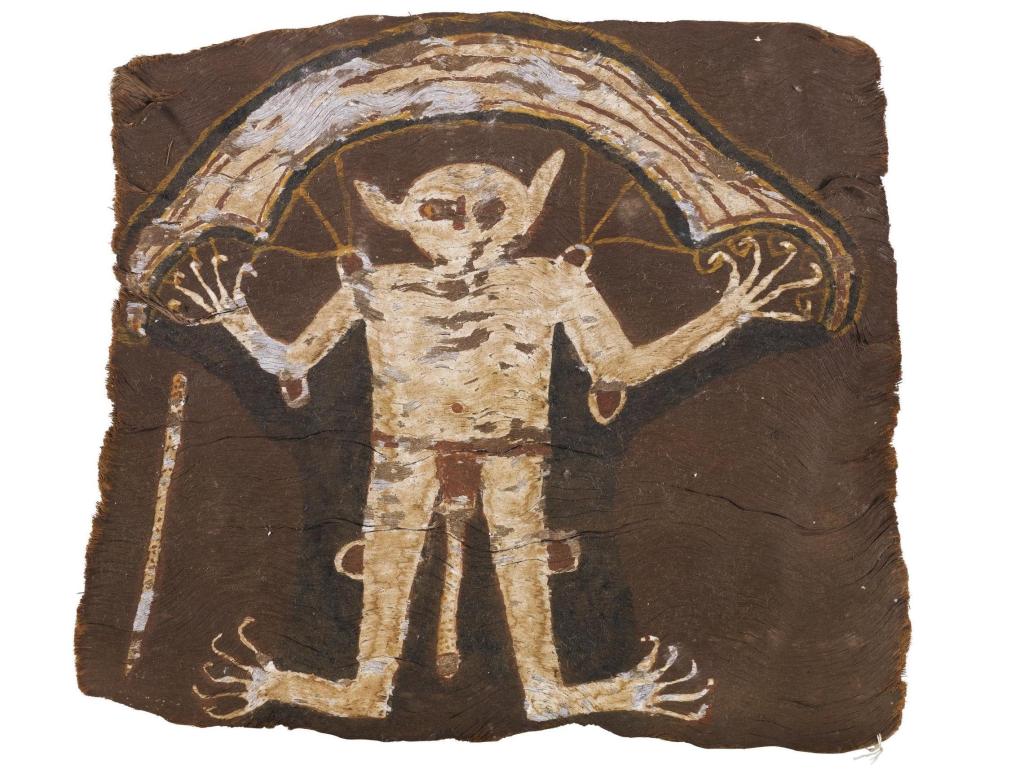 In a move that surprised many local industry players, Sotheby’s International is holding its first dedicated auction of Aboriginal art in London on 10 June, following previews in New York. The 75 lot sale of mostly early and ethnographic material was drawn together by former Sotheby’s Australia Director of Aboriginal Art, Tim Klingender, with a core from notable Dutch collector Thomas Vroom, and the balance (bar three) stemming from British and European collections.

While this provenance makes a London-based auction logistically sensible, Klingender has confirmed the impetus for the locale came from Vroom, who was ‘interested to sell an exceptional group from his collection at a major auction house in Europe.’ Sotheby’s didn’t take much convincing, expressing ‘strong interest in using these works as the core group for its inaugural sale in this category.’

Klingender is enthusiastic about auctions of Australian Aboriginal art moving to the epicentre of the world’s art trade, declaring, ‘the market for Aboriginal art of this quality and significance is international, with many of the leading collectors of the types of artworks being sold situated in Europe and the USA.’ Support for the Sotheby’s auction from this demographic remains to be tested, but the timing might just be right to establish a breakaway sale centre outside the domestic market.

Has protectionism driven the market elsewhere?

In Australia, the Aboriginal art market has suffered dramatic impacts from the fallout of the GFC and changes to regulations governing self-managed superannuation funds, and there are other legislated structural imposts affecting its long term viability. Just as the GFC hit, the Federal Government introduced new legislation and regulatory schemes to protect cultural heritage and further the cause of Indigenous rights, which culminated in a policy regime that has directly impacted the local market. [1]

In particular, the Commonwealth’s Protection of Moveable Cultural Heritage Act 1986 (the Act) has had enormous influence on the declining participation of foreign buyers in local Aboriginal art sales due to works being denied export permission.

Designed to prevent the permanent export of culturally significant material and drafted to balance national interest with property rights, the Act’s most recent amendment (1998) discriminates between Aboriginal art and other fine art, whereby the age-limit trigger for requiring an export permit for Aboriginal art was reduced from 30 to 20 years, with a value threshold at $10,000. In contrast, the trigger date for non Indigenous works of art remains at 30 years, with a value threshold set at $250,000.

All but two works in the Sotheby’s sale have dates that would trigger the requirement of an export permit, and of these, an overwhelming majority have the stipulated value triggers. Klingender agreed:

‘If this was an Australian private collection, the Act would have prevented such a sale [in Australia], due both to the quality of the material being offered, and the way the Act is currently administered.’ (Klingender)

In the growth and boom of the Aboriginal art market, trade to foreign collectors mainly occurred at the elite end of the market where, at its peak, they reportedly captured as much as 50% of high end auction sales.

It is demonstrably clear that the Act has negatively impacted this demographic with all major auction houses decrying stymied sales to foreigners, in tandem with reports of significant declines in pre-sale interest from this sector. Prices, too, appear to have peaked, corroborating a fall in competition.

Like Vroom, American John Wilkerson was a VIP buyer at Sotheby’s Australia through the boom and bust period. In 2008, The Age reported that his half-million dollar purchase of a painting by Tommy Lowry Tjapaltjarri had been awaiting decision on an export licence for over a year before being denied export permission.

In a 2012 interview, Wilkerson declared he was abandoning the collection of Aboriginal art because of this policy, and that he knew of other collectors in the US and Europe doing likewise. When asked about the future of his important collection of early Papunya Tula paintings [2], he replied: ‘At one time I seriously considered an Australian home, but given our passion for connoisseurship, scholarship and education through sharing, I think the collection is better situated outside a system burdened by poorly administered and underfunded protectionism.’

D’lan Davidson, former head of Aboriginal art at Sotheby’s after Klingender (and now the same at Mossgreen) has made his views clear on this topic:

‘I have witnessed the detrimental effect this legislation has had on the international market since 1999. A once buoyant international trade amounting to 50% of our market has slowly and surely been strangled into nonexistence. Contemporary works of art made for sale are now getting caught up in this mess.’

New reforms for the Act to be delivered September 2015

In 2009, the government delivered a discussion paper on the Act’s reform, which included increased Indigenous input in appraisals and changes to the cultural significance assessment process. Notable submissions by prominent academics and curators included a suggestion to allow the Minister to make prohibition declarations for objects outside existing date limits.

The latter is specifically targeted towards Aboriginal art, important examples of which have often been painted in flourishes by elders who had relatively short periods of production. This amendment would make it possible for any major work to be denied export, despite its having been painted within defined and normal commercial market operations.

The Act is once again under reform review with a report due from prominent arts lawyer Shane Simpson by 30 September 2015, and within the auction and primary commercial art sectors it is broadly hoped that the government will respond to growing criticism of the Act’s discriminative restrictions.

Restrictions aside, the Act does provide for significant material refused permits to be acquired by institutions via an endowed National Cultural Heritage Account (the Account), but a review shows only two Aboriginal paintings acquired since 2001, whilst many more have been denied export.[3]

What’s more, the Account’s coffers tally half a million dollars in total, not nearly enough to cover Wilkerson’s Lowry, for example, along with other significant items.

Standards elsewhere – where is the benchmark?

It is useful to consider procedures in places elsewhere. French legislation mandates state institutions purchase works denied export licences, while in the UK they have a year to find funds otherwise permits are granted. In acknowledgement of the Account’s failure to assist with acquisition of targeted material, some have suggested linking it to the tax system, either through direct deduction, or via the Cultural Gifts Program, as it operates in Canada, for example.

Aside from the federal sphere, Victoria has also legislated restrictions on trade in cultural heritage material. The Sotheby’s London auction features notable and rare early material from Victoria’s Murray Darling region. These items would presumably not have been granted sale permits in Melbourne. A sale on Australian soil would also likely have attracted the attention of Victorian Indigenous groups, some of whom are known to agitate for the return of early cultural material as a strategy to highlight Indigenous rights issues.[4]

D’lan Davidson has insisted that ‘a strong international trade would instil confidence in the local market and stimulate the primary market where artists and the communities are the direct beneficiaries.’ Davidson was, of course, opining about international trade buying from Australia.

Despite divergent critical reception of the recent exhibitions at the Royal Academy and British Museum, he believes that they will lead to a new wave of interest in Aboriginal art, and that the Vroom collection sale in June represents ‘a terrific opportunity to strengthen and further develop the international art market for Aboriginal Art.’

This may hold true, and until the red tape strangling the Australian market is loosened, if not unravelled, we could see more sales of exceptional, if not culturally significant Aboriginal Art (and by this I’m referring to the government’s significance assessment guidelines for Australian cultural heritage under the Act, not a work’s cultural relevance to the artist or Indigenous peoples in general), Aboriginal art hosted by major firms in London and New York, stripping local firms of valuable consignments and overshadowing the local market.

All quotes and commentary in this article from Tim Klingender to the author is from personal correspondence, 19 May 2015.

[1] I have argued that this raft of reforms operated as a soft form of redress, enabling the Commonwealth to adopt a moral stance towards its recognition of Indigenous rights, while avoiding meaningful participation in sovereignty debates and legal reform, in addition to deflecting and ameliorating criticism of fractured and ineffective approaches addressing Indigenous social injustice in other portfolios.

[2] Works from his collection of early Papunya material were critically acclaimed across the US in the 2009 Icons of the Desert exhibition, and a body of work formed a large part of the NGV’s Papunya Tula 40 Year retrospective exhibition,Tjukurrtjanu: Origins of Western Desert Art in 2011/2012.

[3] The Collections Council of Australia (defunct as of April 2010) reported in 2009 (on their website under ‘Legal Issues/Import and Export’ – at para 53) that within the period 2003-2007, nearly 600 applications were made to export cultural heritage material, and almost all in the fine art categories were made by auction houses for Indigenous art. Furthermore, in the period 2001-2003 alone, ten Papunya Tula paintings were denied export.

[4] In 1994 the Dja Dja Warrung held up the return of works on loan to the Museum of Victoria from the British Museum through protracted court battles based on cultural heritage laws. The Victorian government thereafter introduced legislation to protect works on loan from overseas organisations. The federal government has since instigated the 2013 Protection of Cultural Objects on Loan Act. The Dja Dja Warrung are currently agitating for the return of these very same works, which feature in the British Museum’s current exhibition of Aboriginal art, “Indigenous Australia: Enduring Civilisation”. The federal laws will protect the works during the planned tour of exhibition highlights to Canberra in November.

Jane Raffan runs ArtiFacts, an art services consultancy, and has over 20 years experience in public/commercial fine art sectors. She is a valuer for the highly vetted Cultural Gifts Program, board member of the Auctioneers & Valuers Association of Australia, and author of Power + Colour: New Painting from the Corrigan Collection of Aboriginal Art.