What Rhymes with Cars and Girls

Based on Tim Rogers’ first solo album, this hybrid theatre production breathes new life into tired boy-meets-girl clichés.
Richard Watts
[This is archived content and may not display in the originally intended format.] 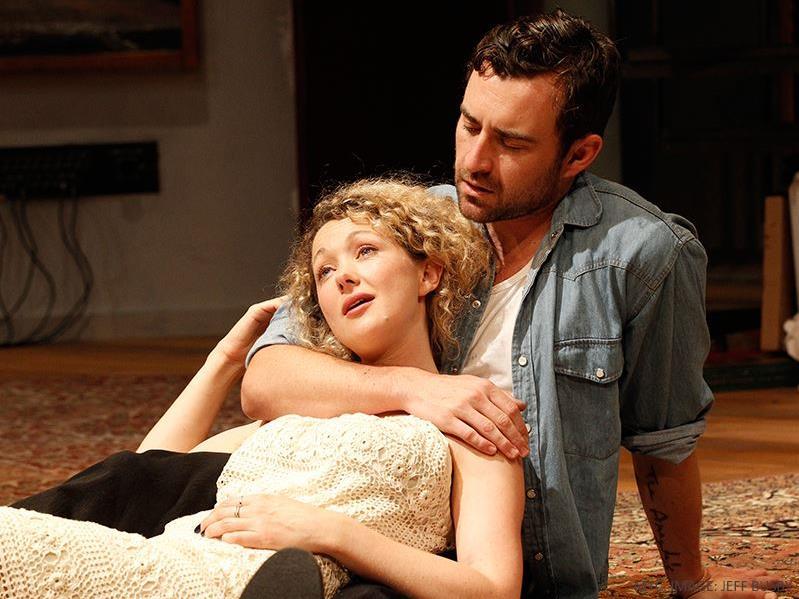 Weaving together the songs from You Am I frontman Tim Rogers’ first solo album with a poetic script by playwright Aidan Fennessy, What Rhymes with Cars and Girls is a fresh and engaging take – with a distinctly Australian flavour – on the classic boy-meets-girl, boy-loses-girl story.

Johnno (Johnny Carr) is a 20-something pizza delivery driver living in Sydney’s western suburbs – ‘on the wrong side of Separation Street’ – with his chronically ill father. The love of Johnno’s life is a rusting V8 that he’s slowly restoring – but then he meets Tash (Sophie Ross), a free spirit who has run away from the pressures and routines of her privileged North Shore Sydney background to eke out a living as a musician.

At a gig, and later in the spreading arms of a Moreton Bay Fig, the pair swap stories, sing, and fall in love. But over the following months, as they try to adjust their lives to make their disparate backgrounds mesh and establish new routines, tensions flare:

‘Art house movies and flat renovations
Newspaper politic and dinner reservations, oh
And Monday’s a wine appreciation course
Talk about the drugs that you just won’t touch no more
What a breeze; just help me off my knees.’

As Johnno, Carr is charismatic and charming, with a fine singing voice, while Ross – who has the greater challenge of playing a character who is hiding behind a mask when we first meet her – brings the perfect mix of cheek and insecurity to the stage. Her singing, likewise, is excellent – as is the relaxed and playful chemistry between the pair; on opening night it was easy to envisage them as lovers.

In this they’re helped by fine performances by the three piece band, led by Rogers himself on guitar (his presence adding a delicious level of meta-theatricality to proceedings when Johnno demands to know why Tash’s band aren’t famous) together with The Twoks’ violinist/frontwoman Xani Kolac and bassist Ben Franz.

Rogers’ folk-infused rock songs, by turns wistful, playful, cynical and reflective, generally work well, with one exception: ‘You Just Don’t Do It For Me, Friend’ feels slightly out of place in the narrative. Similarly, the poetic inclinations of Fennessy’s vernacular script feel a trifle forced on one or two occasions, though never enough to mar proceedings.

Director Clare Watson makes her MTC mainstage debut with What Rhymes with Cars and Girls, and brings great control to proceedings, skilfully uniting its various elements and coaxing carefully physicalised performances out of her two actors. Watson is a director who clearly knows the virtue of delaying a kiss to the right moment to generate the greatest emotional impact, and when to place actors on opposite sides of the stage to foreshadow emotional tensions to come; coupled with skilled performances from actors and musicians alike, the resulting production packs a considerable emotional punch.

Like any genre piece working with familiar plot elements, the strengths of What Rhymes with Cars and Girls are not so much the story that Fennessy, Rogers, Watson and collaborators tell, but how it’s told. In this case, the interlinking of songs and story add a fresh element to the production, resulting in a lively hybrid that’s neither straight play nor traditional musical, and all the stronger for its points of difference. After the lacklustre season opener, Jumpy, it’s a delight to see the MTC taking risks with a new Australian work of this nature.