A handmade cedar hairbrush and a series of pink sculpted hands emerging from the ground are part of an art exhibition that commemorates the inspiring lives of pioneering Australian women.
Cathy Anderson
[This is archived content and may not display in the originally intended format.] 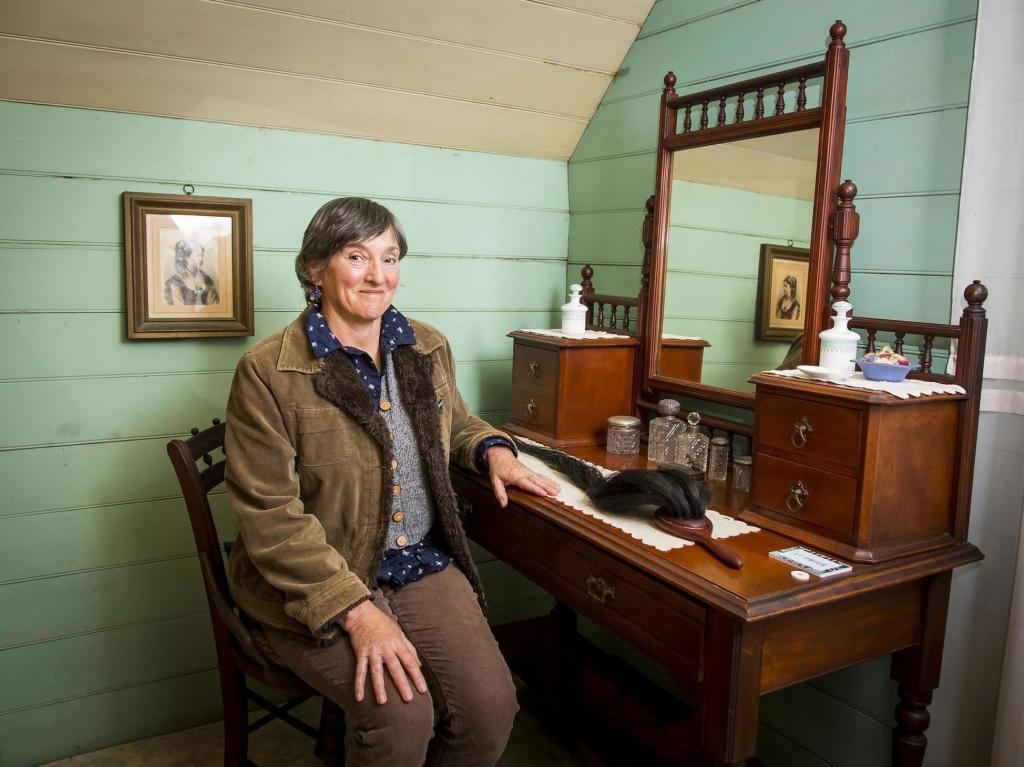 Linda Dening with her artwork, Hairbrush, is the winner of the Meroogal Women’s Art Prize 2016. Photo: Anna Kucera for Sydney Living Museums

The artworks are from this year’s Meroogal Women’s Arts Prize conducted biennially by Sydney Living Museums.

All of the 40 shortlisted pieces are inspired by the lives of four generations of women from the Thorburn and Macgregor families who lived in Meroogal, a property built in 1885 in Nowra on the NSW south coast. It is the only one of Sydney Living Museums’ 12 properties of significant cultural and historical value outside the Sydney Metropolitan region.

When the last member of the family sold the house in 1985 she also donated original furniture and a huge number of belongings. Visitors to the home can see recipe books, diaries, journals, appliances, clothes and photographs and ornaments from a century of habitation. 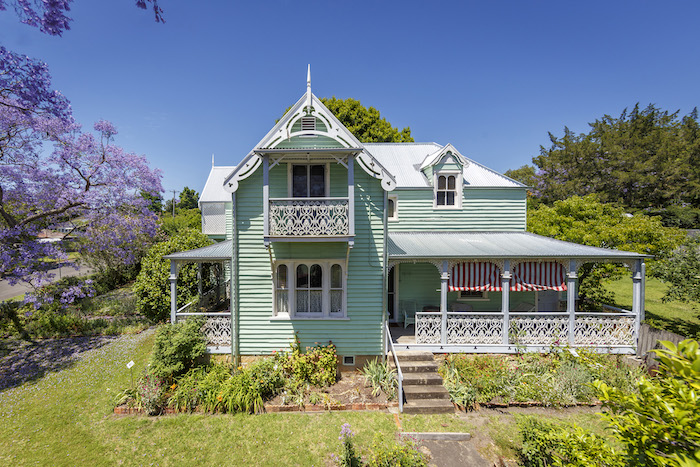 Joanna Nicholas, Curator with Sydney Living Museums, said artists were invited to visit Meroogal and create their works in response to the home, which has been kept in almost original condition, the family’s belongings and the gardens. But it isn’t meant to be an ‘old-fashioned’ interpretation.

‘We invite a contemporary response,’ she said. ‘Sydney Living Museums has a history of inviting contemporary artists to come into its properties and respond to particular stories or scenes and this is just an extension of that.’

What’s particularly special about the exhibition, said Nicholas, is that the works are displayed throughout the home for visitors to admire as they wander through.

‘We have very carefully selected where the works will sit within the house – we haven’t just cleared the drawing room and hung all the pictures in that place,’ she said. 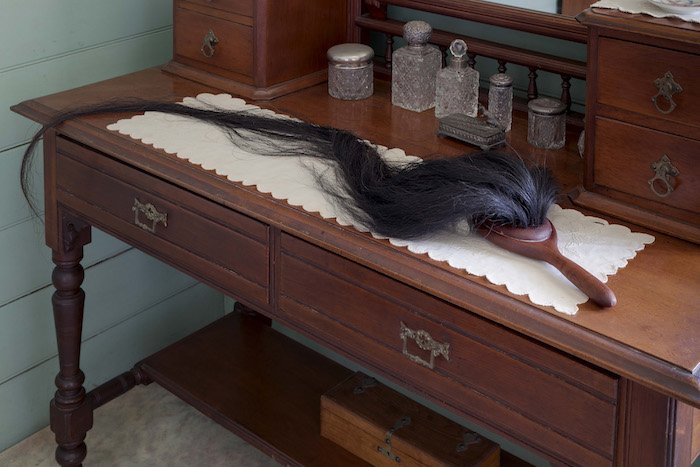 Hairbrush, the winning artwork by Linda Dening, is displayed in one of the bedrooms. Photo: Nicholas Watt for Sydney Living Museums

‘The artworks nestle within the existing collection and some of those works do sit gently and quietly – it might be a beautiful photograph or a piece of embroidery where others might be a bit more challenging but all the works fashion a new lens through which to view the property.’

Nicholas said the prize was an obvious way to commemorate the lives of the women who lived here and forged their own way independently through economic hardships.

‘The raison d’etre of the prize is to celebrate the four generations of the women of the McGregor and Thornburn families by encouraging female artists from NSW to visit the property and respond as they desired in an artistic fashion – whether that’s photography, film, embroidery, performance or other medium,’ she told ArtsHub.

The first prize of $6000 and a $4000 artist-in-residency scholarship at Bundanon in the Shoalhaven was won by local artist Linda Dening with Hairbrush, a bespoke brush made from cedar and horsehair.

Second prize of $3000 was Meroogal Sampler, an embroidery piece by Vita Cochran which took inspiration from patterns on table runner and the kitchen’s lino among others and used stitches from the 19th century, including herringbone, bullion, feather and French knots. 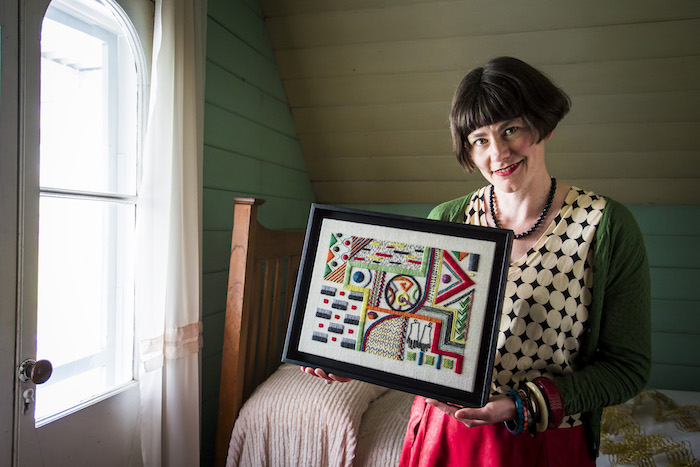 Third prize was Women’s work, a film by Lisa Maris McDonell that reflects the tenacity of the Meroogal women and their difficult work on the property.

‘They also felt that it just sat quietly, it was reflective and conceptually it was really strong and also the execution was incredibly strong,’ she said,

Only one artwork is displayed outside – Ten hands a-making by artists Ro Murray and Mandy Burgess.

‘It’s a sculpture of hot pink hands that come out of the earth,” Nicholas said. ‘In their artists’ statement they talk about baking, cleaning, washing, ironing, sewing and when the chores were done the women of Meroogal took part in the life of their community. It’s a really strong and terrific work.’ 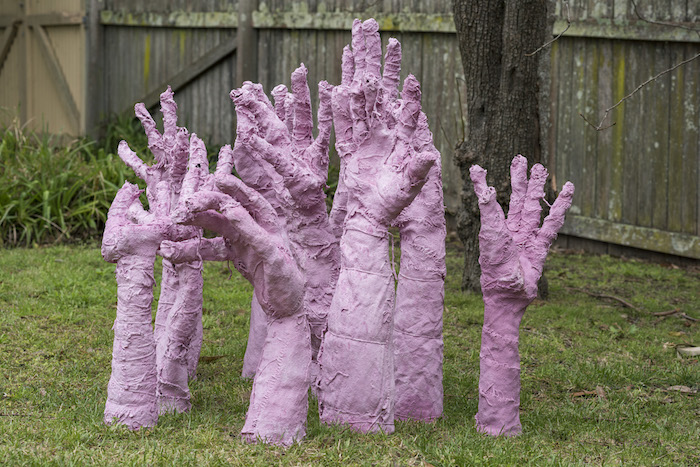 The Ten hands a-making artwork by Ro Murray and Mandy Burgess is made with limewash, hydro-stone, hessian and wire. Photo: Nicholas Watt for Sydney Living Museums

The exhibition is accessible by guided tour only and runs until 28 January. Meroogal is open Thursday to Saturday 10am – 4pm during the January holiday period and exhibition tours run hourly.

But for a particularly dramatic experience, twilight tours of the property during the exhibition will be conducted on January 6, 13 and 20.

There is also a special tour and artist-in-conversation event with two of the awarded artists, Vita Cochran and Judy Panucci, on January 14. Numbers are limited for both events so bookings are recommended.