Create NSW is calling on artists to join an international trend in Metro Art, and create distinctive destination artworks for seven new stations across Sydney.
Gina Fairley
[This is archived content and may not display in the originally intended format.] 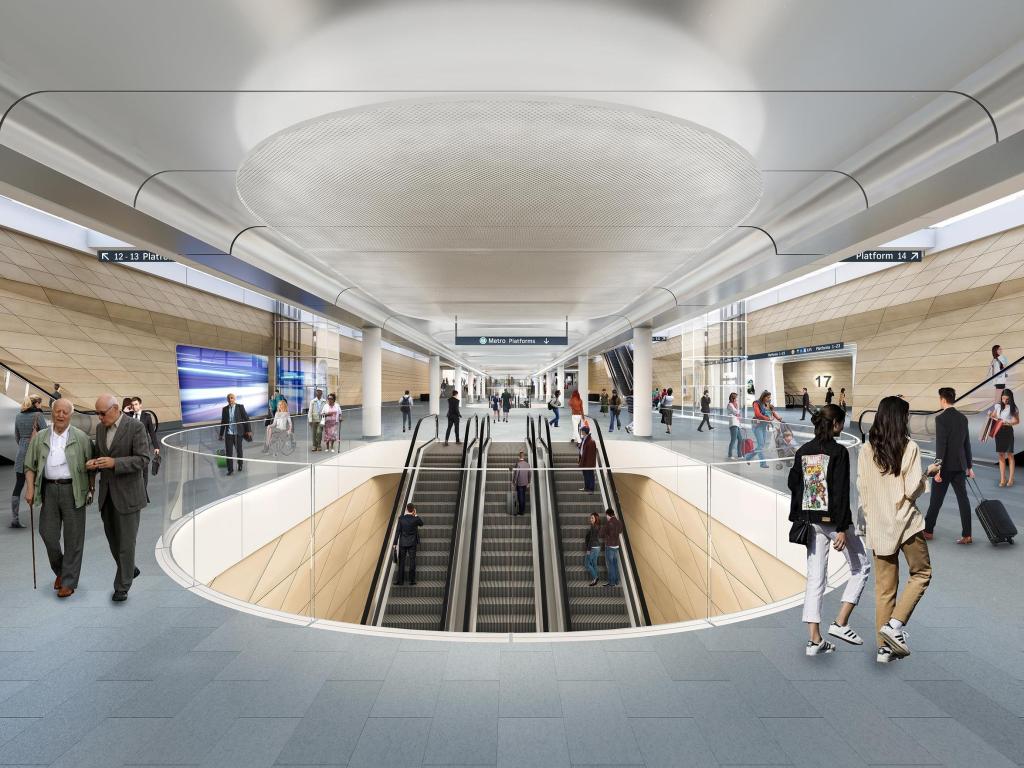 Train stations across the world are increasingly home to bold artworks. Cities including Hong Kong, Naples, St Petersburg, Stockholm, London and New York have reimagined their underground stations as a platform not just for commuters, but for engaging and striking art.

Sydney Metro is soon to join that trend at seven new metro stations in the Sydney CBD.

‘The NSW Government is continuing the international conversation that embeds arts in the everyday and delivers innovative and exciting arts experiences for the people of NSW and the tourists that visit,’ explained Grainne Brunsdon, Director, Arts Investment, Engagement & Development at Create NSW.

Create NSW is calling for artists to register their interest in developing new artworks for Sydney’s Metro Art project. Artists will be selected across two programs: the first on the creation of integrated and/or sculptural artwork, the second on screen based artworks at each of the seven new Sydney stations.

Expressions of Interest for the Metro Art project are now open.

‘This project can make a huge contribution to how we see Sydney as a city’, said Brunsdon. ‘The art that is created can deliver a cultural legacy that will enrich the life of the city for years to come.’

Brunsdon believes that excellent art in public places is an important part of place-making and embedding arts in the everyday. ‘Artists bring a unique perspective and vision that can really transform our environments. It’s great to see them being involved in the design and place-making process.’

Director of 4A Centre for Contemporary Asian Art, and a member of the project’s Metro Art Advisory Panel, Mikala Tai, said that for most people, this will be their only contact with art on a daily basis.

‘I hate the idea of non-spaces; we think of airports and train stations as transitory spaces but really they are places where people gather. Stations are not just about passing through – I used to always meet friends at the clock at Flinders Station in Melbourne. This is what we really want to push with this project – that these are responsive spaces, human spaces – and they are identified by art.’

Tai grew up in Hong Kong where the tiles for each station were a different colour. ‘The idea that a place can be a colour changed the way I think what a suburb is, and how that creative descriptor of a place permeates our everyday.’

This approach to place-making echoes the immersive environment that The Kings and Tom Sloan Design created for Kings Cross Station (UK), Pipette (2014), using a lighting scheme against the architecture to create harmony for the commuter; and Sarah Sze’s Blueprint for a Landscape (2017) at the Second Avenue Subway’s 96th Street Station in New York (USA), which dives deep into another world underground.

Brunsdon said: ‘International examples show how art can greatly improve the experience for people on public transport, for tourists and everyday travellers. For underground stations in particular, art can greatly enliven spaces and make the journey so much more memorable.’

Artist and curator of the 2020 Biennale of Sydney, Brook Andrew is also an advisor to the Metro Art project. For him, the excitement also lies in the proposed medium of video. ‘Video transforms the traveller on an emotional and exciting journey – something that adds to the often otherworldly experience of travelling under the surface of our cities. Art is the transformative aspect of this journey,’ he said.

Andrew added that the combination of architecture, light and colour design underlies the success of many international examples, such as Leo Villareal’s ‘Hive’ at Bleeker Street 6 Station, again in New York, and Ingo Maurer’s lighting concept for Westfriedhof Metro Station, Munich.

‘Sydney is very much an above ground experiential city … The new Metro and new video art inside these subterranean spaces will assist in an exciting development in art culture and transport experience. It will also showcase Australian artists to locals and the world,’ he said.

Brunsdon said that Create NSW is keen to help further the Government’s vision for NSW being known for bold and exciting arts and culture that engages the community and reflects the state’s rich diversity.

‘Art in public places is vital to our culture. With more than 30 million journeys taken by train every month in Sydney, train stations are an ideal site for the intervention of art and culture into the making of public places. Metro Art is a great opportunity to see some fantastic NSW artists create work that will have an ongoing legacy and impact. If you are an artist doing this sort of work please submit an EOI. If you are just interested – keep an eye out for the next exciting developments in this project,’ Brunsdon said.

How to express your interest in this project

The most exciting things are often those that happen within in-between spaces – that moment when an urban infrastructure can offer people a creative pause. It is a very democratic gesture.

Andrew added: ‘The power of transformation and imagination are powerful tools … There will be an immense number of commuters both locally and internationally who will be eager to have their journeys transformed and impressed.’

A panel of experts will assess the applications and recommend a long-list of artists. These artists will have to demonstrate high artistic merit and show that their work will be relevant to the context of Sydney Metro’s stations. They will have to have some experience of the scale suitable for a large infrastructure project or art installation, including public art.

Before you apply, please read the guidelines provided at Metro Art EOI Opportunity.