Working with 8000 artists across 16 language groups in Central Australia requires strategy and sensitivity.
Richard Watts
[This is archived content and may not display in the originally intended format.] 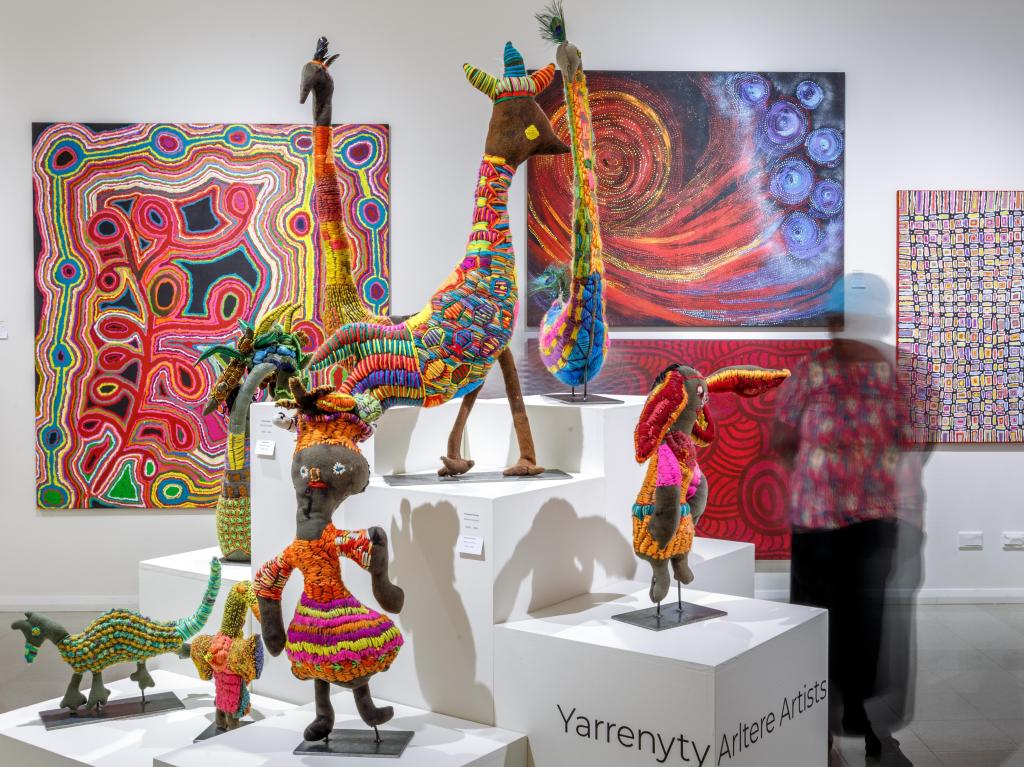 For 25 years, the peak body Desart has championed the Aboriginal artists and art centres of Central Australia through a range of specialised activities and programs, including the annual exhibition Desert Mob, the Desart Photography Prize, and a customised professional development program for Aboriginal arts workers.

‘We are a peak body for the art centres in our region and we exist because of them,’ said DESART CEO Philip Watkins.

‘Our success is pretty much due to the success of the art centres and the industry in our region … It starts with the artists, through the art centres, and Desart’s longevity really is because of them.’

From their base in Alice Springs, the Desart team work with 41 art centres – representing some 8000 artists – across the Central Desert; a region of rich cultural diversity.

‘It is a delicate and sensitive space to be working in, ensuring that what Desart does is equitable across our membership, where there is so much difference.

‘English isn’t a first language in our region so the way we communicate requires a certain level of understanding to ensure that we remain relevant to what the art centres’ and artists’ needs are in our region,’ he said.

Across all its activities, including the annual symposium, marketplace and exhibition Desert Mob, and the upcoming Desart Photography Prize, Desart prioritises the expression of cultural practice.

‘“Culture first” is the foundation of Desart – the culture of the people is the priority, and ensuring that cultural practice and expressions are maintained among the pressures imposed by dominant, Western systems,’ said Watkins.

‘We ensure that Western governance and administrative processes are adhered to, while also ensuring our cultural priorities and cultural expressions are recognised and valued as being just as important.’

Watkins identifies the creation of a customised professional development program for Aboriginal arts workers – now in its 10th year – as one of Desart’s proudest achievements to date.

‘Establishing a program specific to art workers’ needs, ensuring that art workers have access to appropriate types of training, access to information and activities that broaden their knowledge of the arts industry and how our region, and particularly their art centre fits into the arts ecology – that’s a real significant development and achievement,’ he said.

The organisation’s advocacy, including playing a pivotal role in the development of the Indigenous Art Code, and the development of an online artwork management system – the SAM (Stories Art Money) Database – that is now widely used by Aboriginal and Torres Strait Islander art centres across Australia, are among Desart’s many other achievements to date.

‘The work of Desart has certainly not only had a regional impact but a national impact, and that is demonstrated through the Stories Art Money database, which is now used and licenced to 99 Aboriginal and Torres Strait Islander arts centres across the country,’ said Watkins.

‘It enables accurate recording of and provenance of the art, stories of the art, but also provides systems and processes around financial management and reporting, so it has become a really critical tool for art centres across the country.’

Watkins paid tribute to the many who have came before him and helped ensure Desart’s success.

‘I want to acknowledge that at Desart we’re here because of the hard work that a lot of people have put in over the last 25 years. Some of them are still around but a lot of them are not, and I’d like to acknowledge that – that we stand on the foundations that others have made for us. I think for Desart to get to 25 years means that it’s an organisation that has the strength to go on for many, many more years to come,’ Watkins concluded.