Like all Aboriginal art centres, Mirndiyan Gununa keeps culture alive on the ground – as well as on the canvas.
Jinghua Qian 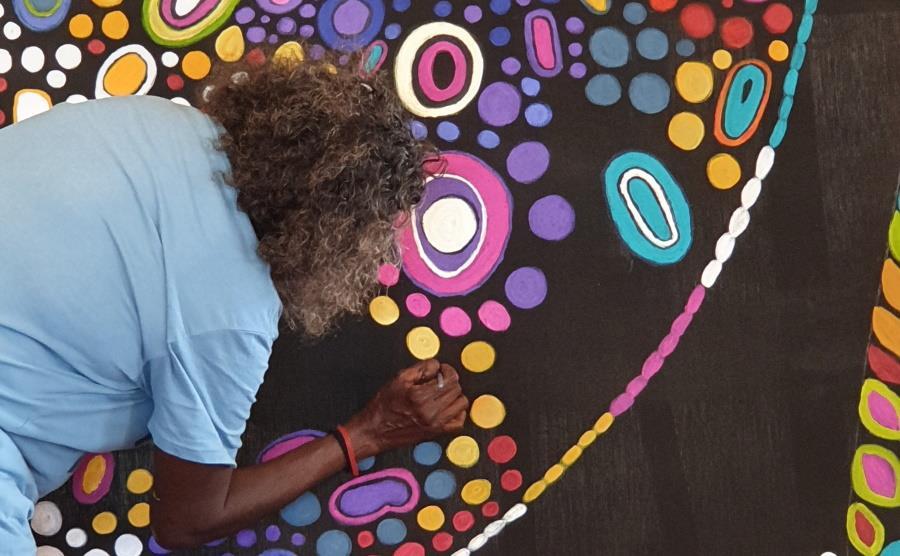 If you’ve heard of Mirndiyan Gununa Aboriginal Corporation, it’s most likely through the work of artists like the late Sally Gabori, whose vibrant, expressionistic paintings caught the eye of galleries across Australia.

The Aboriginal arts centre (also known as MIArt) has since become known for the powerful visual language its artists have developed. An upcoming group show at Brisbane’s Woolloongabba Art Gallery will feature a range of recent works from the centre’s Kayardild and Lardil artists, and one of the focal pieces is a collaborative work by Sally’s daughters, Amanda and Dorothy Gabori, that honours their mother by using her unique iconography.

Art centre manager John Armstrong says that much of the artwork makes reference to traditional ways of recording and remembering – a mix of topographical representation overlaid with a spiritual topography.

‘The artists will correct each other as they’re working. To most people, the work might seem like a set of abstract shapes but another artist will say, no, that shouldn’t be there, the cliff face is on the other side. So it’s all based in reality and observation and memory,’ Armstrong explains.

As senior artist Netta Loogatha says, ‘We learned all about our Country and story places from our Old People. Now we are painting and drawing them, so our grandchildren will learn all about them … It brings a smile to my face when I finish an artwork and see a part of me on it.’

Based on Mornington Island in the Gulf of Carpentaria, Mirndiyan Gununa (‘a place for dreaming’) services a small, remote community of just 1200 people. The Aboriginal-owned non-profit organisation started in 1973 with a dance troupe that performed at the opening of the Sydney Opera House that year. For a few decades, Armstrong says, the art centre focused on dance and language, with a little bit of painting and craft that was primarily to outfit performing artists.

In recent years, painting has become more of a focus, particularly since galleries started showing more interest in the unique work being created in MIArt’s studio. Armstrong’s priority as art centre manager was to make the studio a safe, supportive and inspiring environment for professional artists to work in.

‘Even though they’re aunties and mums and grannies, when they come in there, they’re artists – they put on a different hat and you can see the difference when they arrive to work,’ he says.

The shared workspace also facilitates cross-pollination between different approaches to storytelling and painting, and rigorous aesthetic debate. ‘The studio is full of illustrated art books, people are poring over these all the time and making quite scathing comments about other people’s artwork which is really funny,’ Armstrong says.

The art centre is also one of the biggest employers on the island. Because Mornington Island is so remote, there are few tourists coming by compared to mainland Aboriginal arts centres, so the art centre operates as a production centre rather than a destination. Sales of artwork are a substantial source of income.

‘All Aboriginal art centres are really important. The more remote, the more important it is I think, because there’s very little else where people can earn a decent living,’ Armstrong says.

But while Mirndiyan Gununa is proud of the creative excellence its artists have achieved across diverse art forms, there’s another side of the work that isn’t on display – the everyday work of keeping culture alive and passing it to each new generation.

‘Culture is a priority … The fact that it’s going to plug into a tourist trade or a gallery trade, that’s secondary.’
John Armstrong, art centre manager

‘Both federal and state arts policies are more directed at the end product rather than the on-the-ground stuff,’ Armstrong says. ‘Arts Queensland, for example, the arts policy is really regarded as another facet of the tourism policy. I want the agencies to recognise that culture is a priority … The fact that it’s going to plug into a tourist trade or a gallery trade, that’s secondary. It’s the maintenance on the ground that’s the vital thing.’

While there has been some welcome attention to linguistic preservation, especially with 2019 being the International Year of Indigenous Languages, Armstrong says the same recognition needs to apply to all aspects of culture.

‘This doesn’t just apply to Aboriginal and Torres Strait Islander art either. I don’t think our culture in Australia is given the dignity it deserves,’ Armstrong says. ‘It’s seen as a facet of something else, rather than the thing that in 200 years’ time will be the defining point of 2020.’

In Brisbane, the Mirndiyan Gununa group exhibition at Woolloongabba Art Gallery runs from 4 October to 2 November 2019. In Canberra, a group exhibition of Mornington Island artists will be held at Art Mark Gallery through October and November.