A tale of two Canberras

Telling local stories as well as a national narrative, how well does Canberra balance its two sides?
Richard Watts
[This is archived content and may not display in the originally intended format.] 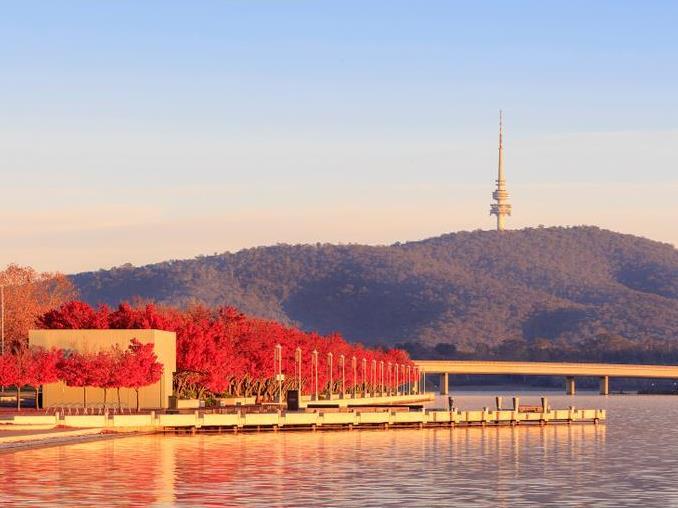 Canberra in autumn. Image by Chadwick Clark via Shutterstock.

Canberra is two cities simultaneously – our very visible national capital, whose cultural institutions present an Australian narrative for the nation; and a local city, telling local stories for residents of the ACT.

How well does Canberra juggle these two roles – and are these narratives contradictory or complementary?

‘Canberra is very fortunate in that we have an audience and an artistic community that are heavily involved in making policy and being involved in policy that shapes the nation,’ said Caroline Stacey, Artistic Director/CEO of The Street Theatre.

‘So that’s always in the air. That’s daily conversation. It’s like coffee at breakfast. So if you go into any theatre, yes, people talk about the theatre but they’re also talking about the ideas, the big ideas that are contained in the works that they’re experiencing … Our audiences have a real hunger and thirst for that information.’

While Canberrans are focused on the big picture – the forces that shape the nation and the world – they’re having such conversations in a very intimate setting, Stacey continued.

Degrees of separation aside, Stacey also celebrates the unique aspects of Canberra, such as local businessman The Martini Whisperer, who has previously made a themed cocktail for a Street Theatre premiere. ‘He manages to straddle the  hidden local haunts, homes and boutique events as well as fast becoming a national and international force,’ she said.

Dr Michael Pickering, Senior Advisor, Discovery and Collections at the National Museum of Australia said Canberra ‘really is a hub for national and international engagement, and even if you were to ignore the political agenda for culture, it is a hub that packs an influence far above its weight internationally.’

He went on to note: ‘You need to separate [actual] arts and cultural activity from the politics of art and culture.’

Instead of seeing two Canberras, Pickering asserts that there are actually three, with strong links to a fourth.

‘There are really three sectors: the politics on the hill; then the concentration of arts and culture institutions and the university that tell the national story; and then the local. And from the local to the international, these [links] are very active but are not always heard about, like the repatriation work we have been doing with the University. We have had considerable influence internationally,’ he said.

As the home of so many cultural institutions, Canberra is the keeper of many objects that signify the national identity. The local arts sector is uniquely positioned to work within this national context while telling the Canberra story, explained Sam Tyler, Executive Branch Manager, artsACT.

‘Canberrans have a distinct sense of pride of place, and get behind locally developed events. DESIGN Canberra is one example. Now in its sixth year, the Festival has evolved from being held over two weekends, to hosting over 150 events across the month of November, attracting a record of 112,844 people in 2018. DESIGN Canberra tells the story of Canberra as a living design laboratory, perhaps a narrative not as well-known on a national scale until recent years,’ he told ArtsHub.

Interstate visitors may be so focused on the major institutions – the National Gallery, Library and Museum as well as the Australian War Memorial – that they often miss the locally grown talent that is holding its own on a national scale, Tyler noted.

‘Outside the inner suburbs, Tuggeranong Arts Centre not only offers opportunities for the community to get involved, but also programs work of national importance like Another Day in Paradise, an exhibition of works by Myuran Sukumaran.’

Then there are the sorts of quirky events that speak specifically to Canberra’s sense of place. ‘Canberra is known for events like Floriade, but visitors should keep their eye on grassroots events like You Are Here Festival and, the newest event in the calendar, Canbeurovision. It’s exactly as it sounds. Local talent apply to represent their suburb in a Eurovision-esque competition that ends in one suburb taking the glory each year. Heats are held at Smiths Alternative, a bar, live performance venue and local institution, the kind of place visitors who are looking for a non-tourist experience should put on the top of their list. Only in its second year of existence, the event is drawing such a crowd that in 2019 the grand final will be held at the Canberra Theatre Centre,’ Tyler said.

‘This type of organic event, grown from community participation and attracting impressive talent and creativity, is the type of arts experience that Canberra does so well. An expression of the word “Canberra,” meaning meeting place in Ngunnawal, Canberrans welcome visitors to come and experience what they already know, that Canberra is far from the dull bureaucracy town reputation as long as you know where to go.’

As well as knowing where to go, it’s also good to know where you – and the city around you – have come from.

‘Although we are constantly told that we are a young city in a young nation, Canberra itself has become a place where the very ancient stories of the people of this land can be respectfully told – although this is an evolving dynamic,’ said Virginia Rigney, Senior Curator, Visual Art at Canberra Museum and Gallery (CMAG).

She noted that CMAG plays a unique local role in the Canberra’s relatively crowded institutional landscape.

‘Our focus is the stories and creative practice of this region – and these are stories and works of both local and national significance. Yes, Canberra is the designed city conjured out of sheep paddocks by politicians and the Griffin plan, but it is also very much a place where individuals have come to make new lives in ways that are different from elsewhere. We hope to convey those stories,’ she told ArtsHub.

‘Yes, Canberra is the designed city conjured out of sheep paddocks by politicians and the Griffin plan, but it is also very much a place where individuals have come to make new lives in ways that are different from elsewhere.’

CMAG’s collection of Sidney Nolan works are one part of the story the institution helps tell – and not just to visitors.

‘For over 20 years CMAG has conducted an award-winning program for Kindergarten children to work with the Nolan collection, so there is a generation of children now who know these works well. As part of our re-display we will be working with Ainslie Primary School and having their infants class develop their own response to the works, [which] will be hung as an exhibition in the entry area where light and conditions make it not possible to hang collection works … With the light rail now open and Civic precinct going through renewal it’s easy to make a visit to CMAG part of your Canberra experience,’ Rigney said.

The light rail will make Canberra more liveable for residents but the Culture Loop bus has made it possible to survey several sides of Canberra’s stories. Taking in most of the cultural institutions, the bus makes it easier to make linkages between the city’s different stories taking in the Australian War Memorial, National Museum of Australia and Canberra Museum and Art Gallery.

Uncovering the secrets of the city

The National Library of Australia (NLA) is one of several Canberra institutions with a national focus. According to Dr Guy Hansen, Exhibitions Curator of Inked: Australian Cartoons at the NLA, such a focus makes the city unlike any other Australia to discover.

‘Canberra is unique with its collection of national cultural institutions located in and around the Parliamentary triangle. It is perfect for that once-in-a-lifetime family car holiday where mum, dad and the kids can complete their pilgrimage to the national capital and explore some great Australia stories,’ he said.

Given his role at the NLA it’s hardly surprising that Hansen is privy to secrets only Canberrans would know.

‘The original plans for the National Library of Australia had two wings on either side of the main building. As it turned out these extensions were never built,’ he revealed.

Read: The iconic Australian cartoons that helped shape our history

For Simeran Maxwell, curator of international painting and sculpture at the National Gallery of Australia, the Gallery’s collection of Australian stories are central to the city.

‘Canberra is immersed in stories … At the National Gallery, our collection holds the stories of people from across our nation. The important Aboriginal Memorial it is the first thing you see when you enter the gallery,’ Maxwell said.

And when it comes to hidden gems the NGA has one that is unmissable. Maxwell told ArtsHub, ‘Visitors come to the National Gallery and will often miss one of the most spectacular parts of the institution – the Sculpture Garden. Not only does it house a wonderful collection of art, such as the fog sculpture by Fujiko Nakaya and Antony Gormley’s Angel of the North, but it provides our guests  with a beautiful and serene pathway to connect to the heart of Canberra, Lake Burley Griffin.’

For Laura Webster, Head of Art, Australian War Memorial it’s the exceptional mix of national collecting institutions that enrich the Australian story in Canberra. ‘All these institutions in Canberra are repositories for the various histories that contribute to telling the multifaceted story of Australia and each have their own unique stories for visitors to discover,’ she said.

But it’s the local secrets that she loves about her city including a rare eating tip: Yarralumla Turkish Pide House. ‘Many Canberran’s know this place as having some of the best kebabs in town. Many of the best restaurants in Canberra are tucked away at suburban strip malls and other more obscure places, so research pays off,’ she confided.

The hard-to-find strategy is true of arts venues too. ‘I would say some our wonderful local arts organisations such as Megalo Print Studio, Australian National Capital Artists (ANCA), M16 Artspace and Canberra Contemporary Artspace just to name a few – they are all doing amazing work in Canberra often with local artists and don’t always get the attention they deserve from out of towners.’

What makes Canberra extraordinary is that it can be both local community and some of the nation’s best culture simultaneously. You can be marvelling at world-class architecture before looking at the finest ink strokes of our political history. Canberra is not just the political centre but Australia’s cultural heart, pulsing with many different tales.