The latest edition of Grififth Review 76: Acts of Reckoning has been curated by the journal’s first contributing editor, Teela Reid.
Thuy On 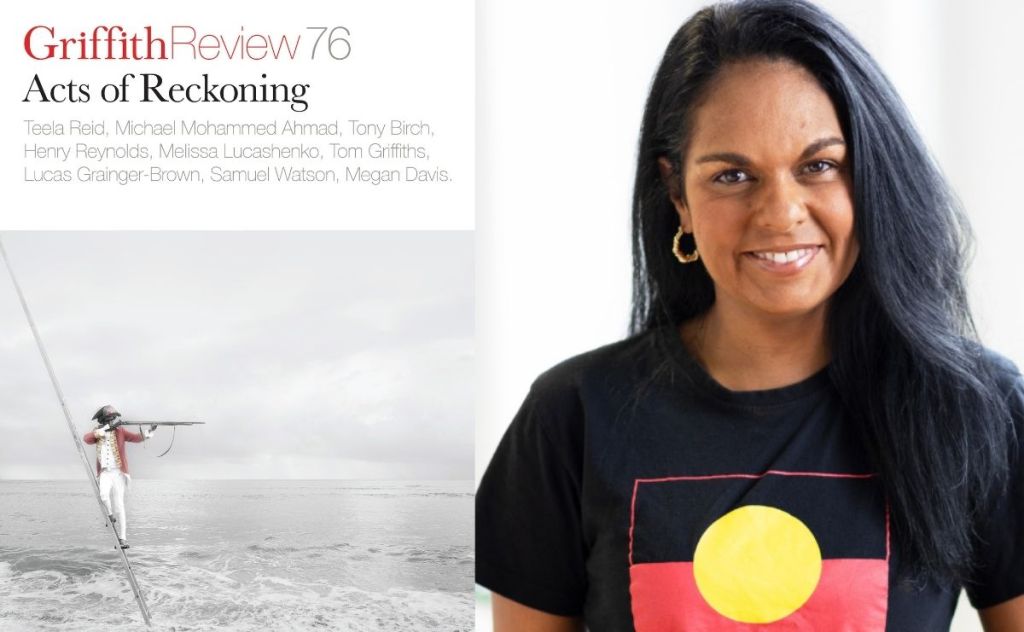 ‘This edition really speaks to the time and place where we’re at now. It’s going to be a powerful tool in connecting people to information and stories that will empower them through a referendum process, as well as tell them about the unfinished business of our nation,’ explained Wiradjuri and Wailwan woman Teela Reid.

A lawyer, essayist, and storyteller, Reid is the contributing editor of a special edition of the literary journal, Griffith Review 76: Acts of Reckoning, alongside editor Ashley Hay.

She is the first contributing editor in the journal’s 19-year history.

‘Many First Nations writers have contributed [to this edition],’ Reid told ArtsHub. ‘What I really want to stress is the generosity and creativity of these storytellers.’

Asked to define what she meant by the word ‘reckoning’ as featured in the title of the edition, Reid said: ‘It’s about disrupting power and privilege and the way in which we transform our national narrative, not through tokenism, but through real acts of ensuring that First Nations voices are at the front and centre of decision making.

‘I think that’s distinctly different from reconciliation because the notion of reconciliation, in Australia in particular, has been watered down in many ways, to enable tokenism.’

There are all these symbolic gestures such as sorry speeches or walking across the bridge for reconciliation, or conversations around Reconciliation Week once a year when it pops around, but I want real power placed in the hands of First Nations people.

‘This was different from what I’ve seen written before, in that finally, non-Indigenous writers are calling out their ancestors for the wrongs that had been done in the past,’ she explained.

One such example is the piece by David Denborough, the great-great-grandson of Samuel Griffith, after whom the magazine is named.

‘While he had regard for what Griffith had achieved, he really called him out for what he’d done wrong to First Nations people. It’s not often we see in Australia white Australians calling out their own privilege, their own power, their own reckoning,’ Reid said.

Her own essay in the edition, The power of the First Nations matriarchy, draws from ‘lots of examples of different First Nations women who punched up to the white patriarchy and were part of the frontline of significant movements such as the 1967 Referendum,’ Reid explained.

‘I speak also of the Land Rights movement, the Wik decision and how matriarchal kinships and First Nations communities are powerful. I bring it to where we are now in terms of the Uluru Statement.’

When she’s not practicing in Aboriginal Land Rights litigation, curating for magazines or campaigning for the Uluru Statement from the Heart, Reid is also involved in co-running a bookclub: @blackfulla_bookclub.

‘It’s an Instagram handle that started at the beginning of the pandemic in 2020. I live off Country and so myself and another First Nations lawyer, Merinda Dutton, decided that we wanted to share the books that were still keeping us connected to our communities, because in the pandemic there was a huge risk of becoming disconnected through isolation and lockdowns,’ said Reid.

‘The platform is really about celebrating First Nations ancestors as the original storytellers. We’ve witnessed many non-Indigenous Australians coming to the platform wanting to learn because they were denied the truth of history and many don’t have access to First Nations communities.’

Reid explained some of the differences between white canonical texts and First Nations work. ‘Blackfulla stories aren’t necessarily defined by genres; they don’t have to be written in books. There’s no real difference between fiction and non-fiction. We’re all just speaking to one another, and over time many stories are interrelated and will always be connected because of the ways our communities are built on stories.’

First Nation writers have recently dominated literary prizes across the country, including Evelyn Araluen winning the Stella Prize for Dropbear and Jazz Money receiving the Dreaming Award for a young and emerging artist, also for a poetry collection, How to Make a Basket, her debut. Reid feels the recognition of their talent is overdue.

‘We are the greatest storytellers of all, and I think it’s just about time Western publishing houses are catching up with that. The growth is a testament to how good and powerful First Nation stories are and this is a real credit to our ancestors,’ she said.