Aerial extraordinaire Legs On The Wall and Willoughby Symphony Orchestra will present another iteration of orchestral delight in Chatswood.
Celina Lei 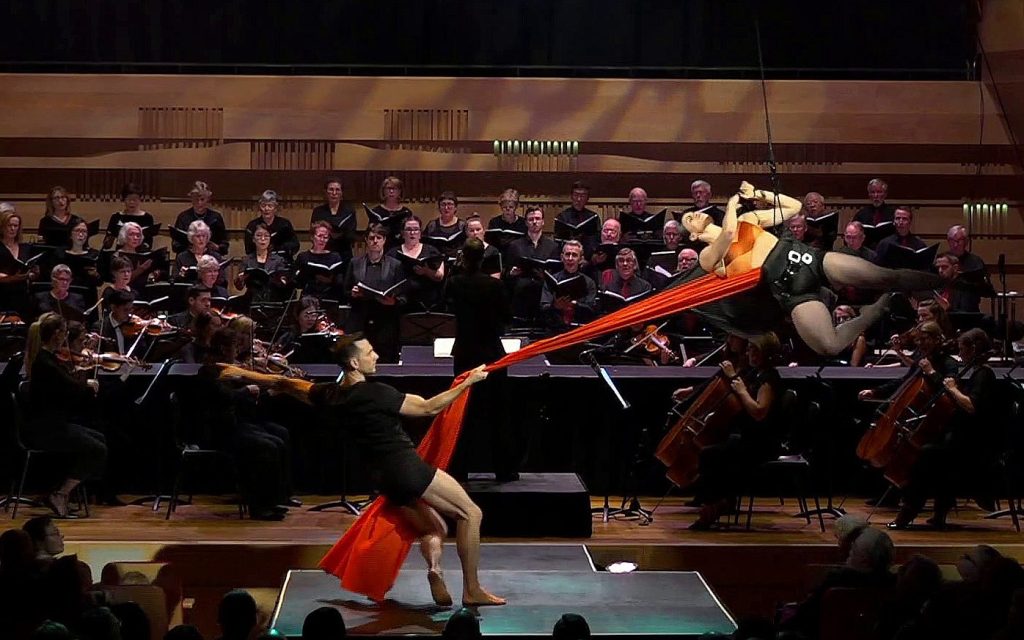 Legs On The Wall artists and WSO performing in Next Chapters I, 2021. Video stills: courtesy of MDCH.

A new season of culture is about to be launched at Chatswood with Culture Bites 2022.

Kick starting the annual program will be the second iteration of the highly acclaimed collaboration between physical theatre extraordinaire troupe Legs On The Wall and Willoughby Symphony Orchestra, entitled Next Chapters II: Above Below.

The one-off aerial and musical experience premieres at the The Concourse, Concert Hall on 19 March.

The unmissable opportunity for Legs to work within a concert space is something which initially drew the team towards Next Chapter I in 2021, Artistic Director Joshua Thompson told ArtsHub.

‘Legs hardly ever sits in an [indoor] space. We mostly perform outside, we come into the theatre now and then but definitely not into a concert sort of setup,’ said Thompson when he first stepped into The Concourse to envision the project.

He continued: ‘I’ve always wanted to do a piece that elevates both aspects of the physicality and the composition. And in this room [the concert hall], I just thought it’d be great to fill the air as well – not only just fill the space with sound but fill the air with performances.’

The experimentation of Next Chapters I meant that the team now has more time to fine-tune aspects of the performance.

‘The partnership [with WSO] is in a good place … After that first performance I spoke with Sarah [Penicka-Smith], the Conductor, on working together more in a physical manner,’ said Thompson. Turned out she’d always loved to fly but it was lead soprano Susannah Lawergren that turned on the light bulb moment and will be joining the three Legs aerialists.

The excitement can be felt through Thompson’s words, who pointed out that flying the soprano while allowing her voice to sing out unconstricted will be a feat in itself. ‘It’s that feeling where she will almost float with her own voice,’ he added.

An element of excitement and surprise will run through the show, as Legs and WSO break the mould of what an orchestral performance can be.

Most importantly, Thompson’s vision is about creating a refreshing, rather than completely unfamiliar, experience.

‘People are going to see the orchestra – that’s an important thing and definitely not second to what we’re doing.’

Thompson continued: ‘The beauty about this collaboration is asking “Actually, how do we bring along the audiences of the orchestra and not interfere with what they love? How do we bring along the Legs audience, the live performance stuff, and meet them both in the middle in a way that actually should both lift each other, as opposed to one being back or front, one being outward facing or not?”

During the performance, there will be moments where the performers are still, allowing the music to act as the leading voice, said Thompson. ‘It really sort of bounces like a metronome between the two as the story unfolds over the night.’

Audiences can look forward to orchestral highlights including renowned Australian composers Elena Kats-Chernin’s Russian Rag and Wild Swans Suite, and Graeme Koehne’s Just Walk Beside Me. In addition, Matthew Hindson’s Stars Above Us All and Mein Weg from Estonian composer of classical and religious music, Arvo Pärt, will transport the experience to another world.

Furthermore, ‘the whole piece will be built with a narrative arc, where last time [the music and physical theatre] sort of sat as islands,’ said Thompson. ‘This is an actual collaboration coming together that started and is driven from the joining of these two companies … I’m looking forward to this because it feels like a much more fruitful and wholesome engagement,’ he concluded.

Don’t miss this one-off performance of Next Chapter II: Above Below at The Concourse Concert Hall on 19 March 7pm; tickets now on sale.