Trudy Hellier builds the reality of a fragile life and loves, and in doing so creates a sympathy bordering on kinship.
Mark Brandi
[This is archived content and may not display in the originally intended format.] 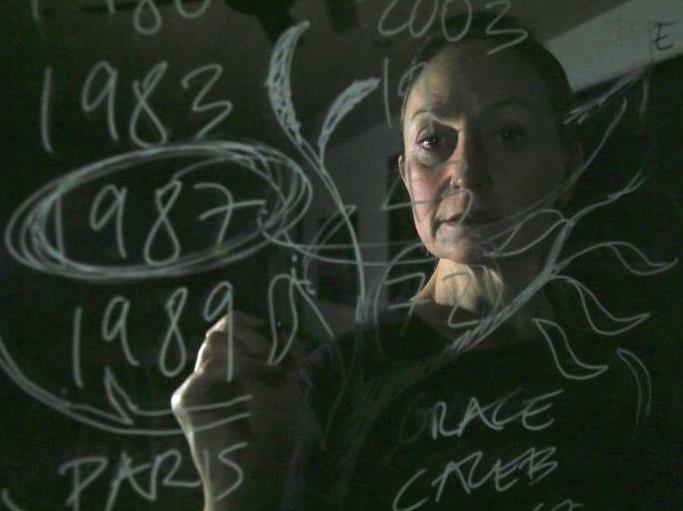 The swingers’ scene. A secret double-life. A tryst that ended in murder.

In Waking Up Dead, writer Trudy Hellier goes behind the headlines to expose the tragedy of those left behind.

A successful businessman inexplicably vanishes following a business trip, leaving a wife bereft and police scrambling. A business deal gone wrong? Revenge? An affair? The truth, however, was more shocking than anyone imagined.

Caroline Lee (Bell Shakespeare, MTC) is the widow, poring over the fragments of the life she shared. Lee embodies a brittle tenacity as she grieves not just for a lost husband, but for a life they had created together – a life now rendered a fraud.

Lee is outstanding. She delivers a searing but measured one-hour monologue spanning twenty-five years. Sparsely staged on a large sheet of white paper, Lee retraces their past and illustrates the icons of her memories: the cheap furnishings of a share house; the window of their first apartment; the office they shared as business flourished and their family grew.

The use of illustrated outlines in the set is reminiscent of Lars Von Trier’s Dogville. This sparse environment cleverly focuses the audience on the intensity of the storytelling.

To this end, the script is expertly crafted. Hellier has created a richness and rhythm in her language that could easily see this work translate into a literary short story. She avoids lampooning the wife’s self-delusion. Instead, she slowly builds the reality of a fragile life and loves, and in doing so creates a sympathy bordering on kinship.

The sound design is also effective, with Lee’s monologue interrupted with excerpts of police interviews and media reports. It’s a powerful reminder of the public nature of this tragedy.

What is less effective is the sound designer (Ian Moorhead) sitting slightly off-stage, but occasionally interacting with Lee as she becomes increasingly agitated and distraught. His involvement breaks the tension and dilutes the power of the performance.

Nonetheless, Waking Up Dead remains an intelligent and surprisingly affecting exploration of the quiet suffering of the ordinary people behind the scandal.

Mark Brandi is a Melbourne writer currently completing his first fiction manuscript, a literary crime novel set in country Victoria and the inner suburbs of Melbourne.