Sabsabi has the capacity to provoke deep questioning of our own racial, religious and political positioning without ostracising the viewer in the process.
Gina Fairley 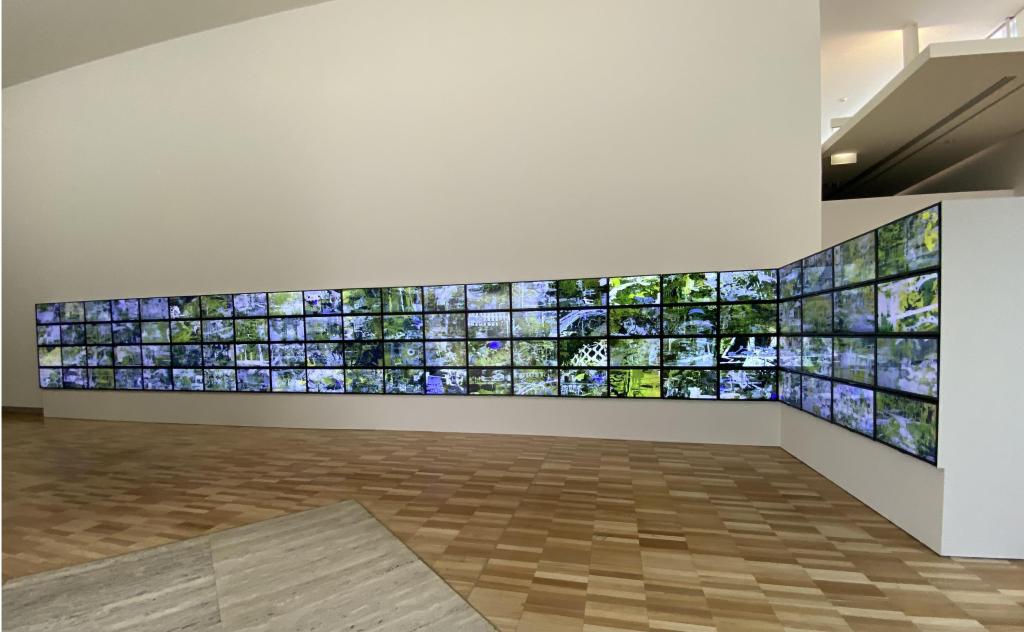 This exhibition could be thought of as a mini-survey, tracking the 20-year career journey of artist Khaled Sabsabi, and yet, for a practice that is so rich, the exhibition feels like a lean conversation with just six works presented.

But as one spends time with the work, what unfolds is an incredible depth and narrative behind each individual piece. The viewer gets a sense of the diversity and eloquence of Sabsabi’s practice in a snapshot.

What we also learn is that the Art Gallery of NSW’s exhibition, A Promise: Khaled Sabsabi, is the first in a series of two exhibitions – the second part, A Hope: Khaled Sabsabi, will take place at Campbelltown Art Centre in 2021 – which removes a little of that unsatisfied, or lean feeling.

Curated by Matt Cox, in close collaboration with Sabsabi, A Promise charts the political, social, cultural and spiritual intersections we both share and challenge – those dual thorny, yet uplifting, conversations around identity, nationhood and change.

Sabsabi describes his search through his work as finding an understanding of the universal, ‘ultimately more unknowable than our own selves.’

Born in Lebanon, Sabsabi migrated to Australia in the late 1970s to escape civil war. Initially a musician and performer on Sydney’s hip-hop scene, he began his career as a visual artist in the 1990s. But it was a return to his birthplace in 2001, that inspired the next two decades of Sabsabi’s practice, including the works presented in A Promise.

Sabsabi said: ‘A promise is an assurance that is enlivened by an action. It is something made by one to another and confirmed through shared understanding. A promise embodies hope and trust, but also anxiety and relief as it is either kept or broken.’

Approaching the exhibition, viewers first encounter the 92-channel video installation, 70,000 veils (2004-14) which took ten years to make and is designed to be viewed through 3D glasses (which has been tricky with COVID restrictions).

It sits within sight of Sanjak (2002-12), a hand-stitched sacred and ceremonial banner, that presents as a gesture of welcome. Its very placement at the entry of the exhibition is a signal to viewers to approach the work as a kind of shared spiritual journey, and to face the unknown with an open heart and mind.

Paired, they are testament to the diversity in Sabsabi’s practice, and his great capacity to weave contemporary art with Sufism teachings.

Sabsabi spent over seven years collecting these images – largely of everyday life and his travels, which he then photoshopped into 70,000 images, and finally created 3D videos from them over another three years – a kind of meditative and devotional practice in itself.

It also has an underlying autobiographical quality to it, that sits somewhere between witness, devotee and outsider. For Sabsabi, he describes it as a ‘metaphysical threshold’.

This notion of threshold is echoed in its placement at the start of the exhibition, where the visitor symbolically passes over that threshold into new considerations and journeys themselves. As this work suggests, it takes time, a level of commitment and a willingness to question what we value.

The viewer is then ushered down a tight corridor housing the three intimate drawing series all using oil stick oh photographic paper: The Prophet – a new work made for the exhibition; South@ part B (2017-19), and Messiah part 1 (2019).

Presented low to the floor in two asymmetrical groupings, South@ part B feels like deep-thought mapping; sketchy clues in white on black, caught between emotional and analytical thought processes. One might even feel the association of a black board – the place of teaching and understanding.

But Sabsabi explains that the narrative, however, is far from harmless, describing it as the ‘emotionally numbing story of what it is like growing up in segregated and contested territories’.

How are we taught hate rhetoric, and what are sites of learning – be it a war-torn zone or our rich safe urban environments that equally ‘set us against one another’?

This work is a great example of how Sabsabi has the capacity to provoke deep questioning of our own racial, religious and political positioning without ostracising the viewer in the process.

Similarly, The Prophet, takes its cue from learning and the use of miniatures to tell stories in manuscripts. Here 48 – quite gestural and raw paintings – are presented in a tile-like grid floating slightly off the wall, unframed. Sabsabi describes them as a contemporary manifestation of Islamic image making, in particular paying tribute to the Lebanese-born American artist, Gibran Khalil Gibran.

While most viewers experiencing the images are unlike to know the prophet, these images sit equally within a lineage of art history and modern portraiture, fuelled by a passion (or a spirituality) in the mark. They are clearly emotive works and, when grouped in this way, draw the viewer in as jewels to be savoured.

Detail, The Prophet, 2020. 48 drawings in oil crayon on photographic paper. A Promise: Khalid Sabsabi at AGNSW.

Completing this avenue of works is Messiah part 1, 14 portraits that sit side-by-side, marching down the wall in traditional stock museum frames, and given plenty of float space in their mounts.

Sabsabi described them, ‘like invited guests at a table offering a moment of self-inclusion and reflection’. What makes sense of their inclusion here is that they each began as a landscape from the 70,000 Veils series, that Sabsabi worked into and over pushing the abstract gesture.

From landscapes they became portraits, and a subtle veiled narrative about our universal connection and capacity to change over time.  Curiously, Archibald and Wynne Prize are presented concurrently downstairs in the gallery.

The scale of these series are interesting, intimate and yet holding big gallery real estate, and in doing so upfront in this exhibition, offers a kind of reversal by Sabsabi and Cox to celebrate the pause, and reframe how we value creative expression.

Then, you turn the corner to have that thought tumble, as one faces Sabsabi’s enormous signature multi-channel video work, Organised confusion (2014).

‘What inspired me to make this work is the coming together of multicultural Australia and the desire to subvert the decades of derogatory labelling of football as “wog ball”, says Sabsabi, adding that in making his work he, ‘wondered if we might find a new spirituality grounded in the everyday.’

I first viewed this work in the raw cavernous space of the Sydney venue Carriageworks where the volume was pumped up, and you physical felt caught between their vying team callst. It had both a religiosity, a euphoria and a hint of unnerving pregnant violence.

This presentation is somewhat tame within the sacred hallowed gallery space. Forming a cruxiform of engagement, the video is paired with a handmade wooden mask and a suite of black and white photographs of the avanese dancer Agung Gunawan, performing a dance evoking a state of spiritual transformation.

Collectively, it promotes a kind of gladiatorial spectrum and the message is quiet primal.

Overall the push and pull spatially of this exhibition, between Sabsabi’s large scale immersive work alongside intimate collections of paintings, keeps the dynamism at play. It speaks of collected beliefs and humanity at a time when we need to be empathetic and accepting. If you are willing to invest the time in this work, then it rewards in buckets.