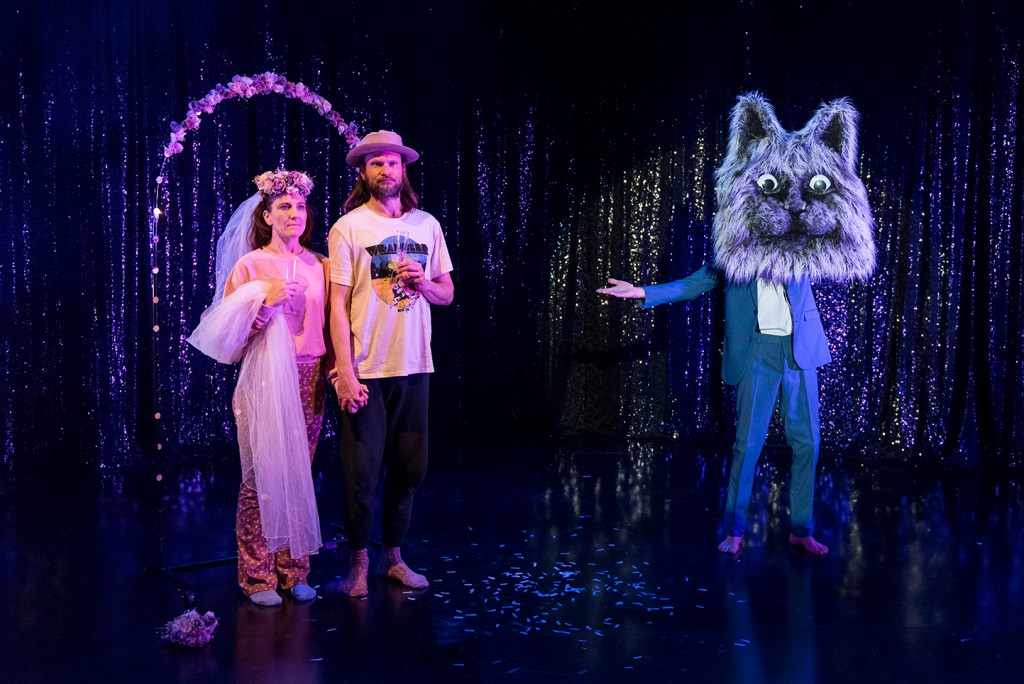 Unheimlich, created by Tarryn Gill and Katt Osbourne, is a multidisciplinary performance of the uncanny, uncomfortable nature of relationship. The live art experience incorporates mask work, puppets and objects with evocative set, soundscape, and voice-overs to create a stunning visual dreamscape. As Osbourne explains, it is intentional the ‘show has a dream-like and surreal logic and takes the audience on a journey of feelings and images, which makes the work feel like moving visual art’. The story of a couple’s relationship, from its beginning to end, is narrated by a house-Cat who guides the audience through the discomfort of watching a relationship fray and tear apart. The intense emotional journey is alleviated through moments of humour as audience members can relate to the depiction of the couple’s everyday activities in a domestic setting: watching television, ordering pizza, playing a board game, and patting the cat.

The title of the production is a reference to Sigmund Freud’s essay ‘Das Unheimliche’ (1919). The German adjective ‘unheimlich’ can be understood in contrast to the word ‘heimlich’ which means concealed, hidden, private and belonging to home; not strange but familiar. When used in relation to animals, ‘heimlich’ means tame and companionable, embracing a sense of quiet contentment and comfort. “Thus heimlich is a word the meaning of which develops in the direction of ambivalence, until it finally coincides with its opposite, unheimlich” (Freud, 1919, p. 226). As the caring couple become ambivalent, despair and frustration slip into unease which devolves into violent outbursts and the struggle for power and control over each other and over things usually concealed from oneself. Gill reflects, ‘I’ve been interested in the concept of the uncanny for a long time and I think my artworks tend to hold dualities in this way: funny and frightening, comfortable and uncomfortable, conscious and unconscious’.

The notion of what is seen and unseen in a relationship plays out through the story of the heterosexual couple who, in the first instance, appear happily ensconced in their domesticity. The woman, played with verve by Sarah Nelson, is introduced as a figure sprawled in a bathtub on a turntable revolve inserted centre stage. As the revolving floor rotates, we meet a male character, lounging on a couch, eating Cheezels, watching television; a figure performed with disarming ease by Brendan Ewing. As the woman joins the man to cuddle on the couch, the couple establish connection with the audience: watching the audience as though watching television.

What is typically hidden from the public eye soon becomes exposed, unveiled, and revealed in moments of slippage within the domestic space. Repetition is used with subtle effect to illuminate the fracturing of relationship. Rapid descent into discomfort is made even more painful by an accessible narrative subverting the illusion of a happy marriage by invoking shadow figures wearing masks. Performers Jacob Lehrer and Rachel Arianne Ogle move with purpose and poise as they hover with masked faces, embodying that which should remain unseen.

The eyes of the house-Cat perched on a plinth at the entrance to the theatre space at first flash blue during narration. Later, the eyes flash warning red: the couple cannot touch each other without an electric shock accompanied by the sharp sounds of a buzzer and the unsettling flash of red in the cat’s eyes. The desire of each to reclaim the other is physically painful and visceral. The words, ‘you’re my person,’ at first a tender declaration of love, are yielded later in confusion and in a desperate attempt to control.

A grim intimacy, Unheimlich undulates with alarming familiarity, poignancy, and sadness. In the end, each person is unable to reconnect without pain and is rendered emotionally homeless. The lingering traces of sadness and pain are destined to remain, in the words of our narrator-Cat, ‘frozen for a very, very long time’.

ReferenceFreud, S. (1919). Das Unheimliche. In The Standard Edition of the Complete Psychological Works of Sigmun Freud An Infantile Neurosis and Other Works (Vol. XVII 1917-1919, pp. 219-253). London, UK: The Hogarth Press and The Institute of Psycho-Analysis.