A night of transgressive humour to agitate and provoke.
Adele Aria 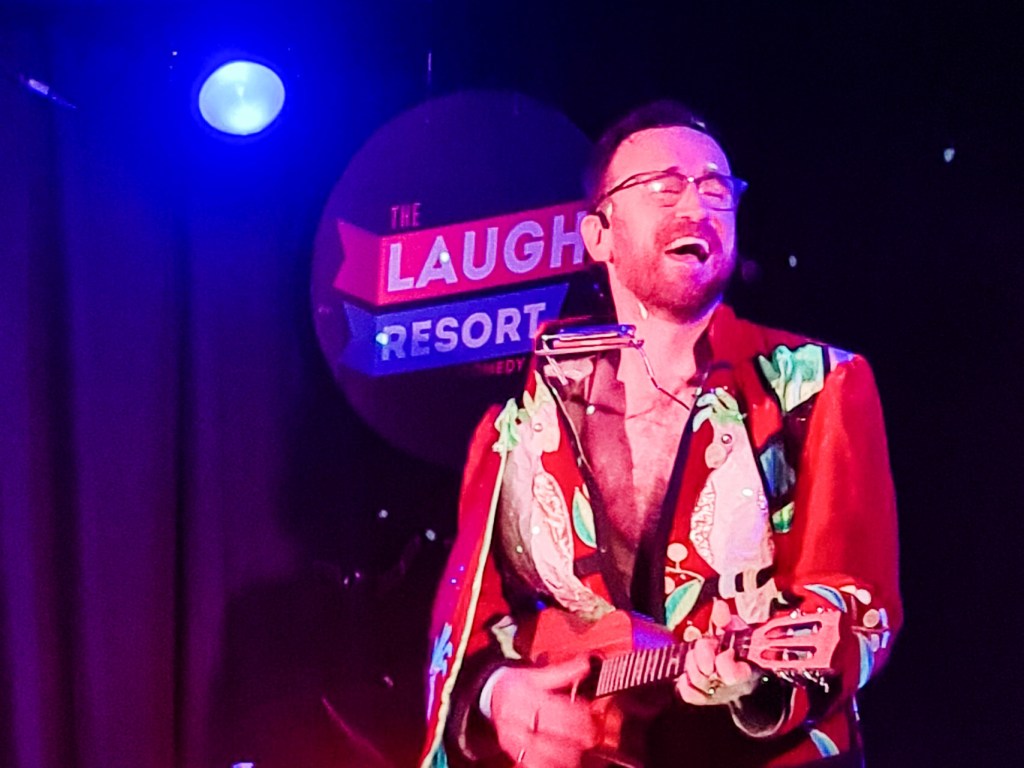 ‘This show showcases acerbic wit and incisive observations that don’t rely on sledgehammer messaging. It trusts audiences to discern intended cultural criticism and the implications of what is left unsaid.’ Photo supplied.

Building upon a reputation for cabaret, frenetic energy, and eclectic talents, Tomás Ford delivers a vibrant theatrical and musical sidestep from an established back catalogue. His audiences have grown upon encountering a variety of characters and shows at Fringe Festivals across the world, lockdowns, and YouTube.

Shambling onto the stage, a Master Bush Scout begins to host with a costume of masculinity and proceeds to revel in his self-described ‘impressive’ talent. Crooning, yowling, and plaintively serenading while playing many of the instruments that people love to hate, the ukelele is just one part of a daring comedic and musical journey. The lines blur between Ford and the socially obtuse Scout leader who prefers to hear his campfire audience howl ‘Baloo’. Comedic moments are interspersed with existentialist anxiety and personal vulnerability.

Fringe is the realm of the experimental and artforms can be judged as lowbrow through a lens of classism. The boundary defiance makes valuable space for talent that aren’t typically invited to major festivals or stages. Accordingly, Ford creates an unconventional dash through a vaudevillian rhythm of unpredictability. People with fond memories of campfires led by dependable scout leaders are quickly transported away from the typical young adult marshmallow experience to a self-aware challenge of the status quo.

The stage has little set dressing but serves as a closet for more costumes than are immediately obvious. Giving a ‘full view of the knee’, the wilfully oblivious character delivers songs that are humorous and almost disconcertingly enjoyable. Ford’s expansive vocal range and talent are well applied, with one crowd-favourite song featuring a deftness of tongue that captures attention.

The cultivated awkwardness is so well-conveyed that it can hard to determine whether some fumbles are deliberate. As the show goes on, some instrumental and lyrical mishaps are revealed to be a function of demanding tongue twisters and complex writing. Ultimately, this highlights adaptive showmanship because Ford keeps up the patter and manages to turn each unscripted moment into audience interaction and laughter. Live performance, especially as a soloist with minimalist set design and lighting, is no easy mission. This is even more so in a world that has seen the Australian arts sector and many artists troubled and disarmed by a pandemic. Undoubtedly, masks worn by audiences will muffle their feedback and this includes the laughter that comedy shows (even the darkly transgressive) thrive on.

Fringe Festivals typically promise experiences that deliberately eschew mainstream venues and event calendars or are best suited to an environment that embraces experimental, quirky, and often politically daring content. Accordingly, this show showcases acerbic wit and incisive observations that don’t rely on sledgehammer messaging. It trusts audiences to discern intended cultural criticism and the implications of what is left unsaid. The absurdist meander is likely to unsettle some audience members while unsettling norms like masculinity, comfortable formats, and musical conventions.

Maneouvring through an unpredictable catalogue of topics and costumes, Ford has crafted a show that doesn’t try to oversimplify complex issues for punchlines while bouncing between musical genres and droll self-deprecation. He lampoons the self-soothing and familiar refrains of people who have felt pricked by the trend toward redressing social injustices and systemic marginalisation. Amid the apparent chaos, Ford uses comical moments, sombre and introspective sharing, and wit to entertain, agitate, and provoke reflections on how we understand or engage with concepts like privilege, accountability, mid-life crises, and sexiness.

Campfire Ukulele Torture will be performed until 11 February 2022