Stories of love and loss at the fall of a bridge.
Dr Diana Carroll 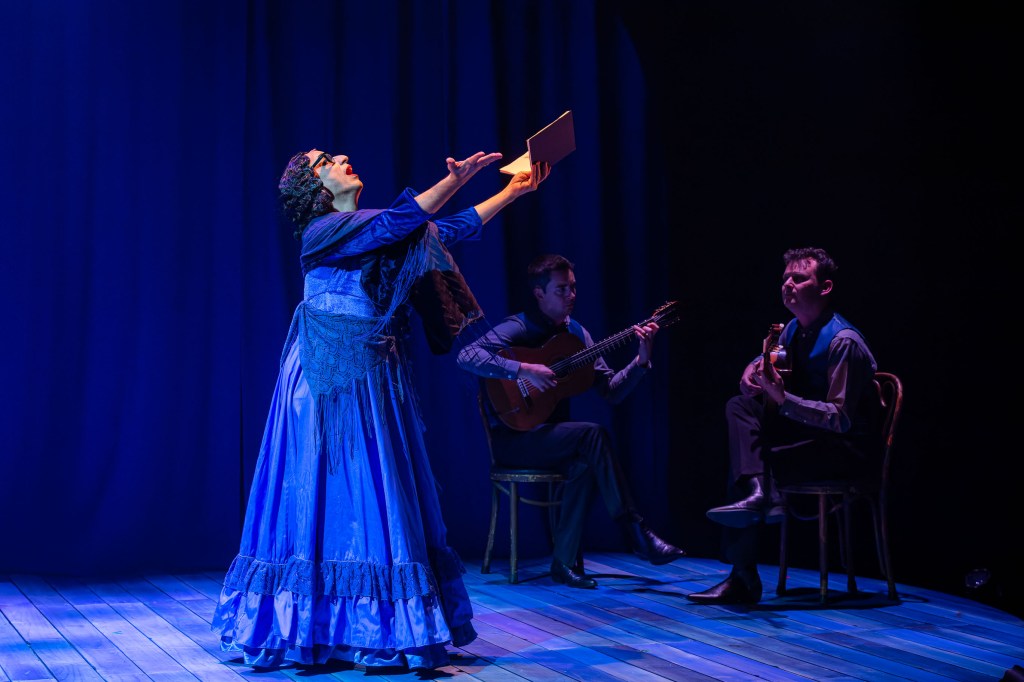 Paul Capsis and the Grigoryan brothers in tribute to the lives on the ill-fated bridge. Photo credit: Chris Herzfeld.

In 1928 a novel called The Bridge of San Luis Rey won the Pulitzer Prize. The second book by writer Thornton Wilder, it went on to be hailed as a modern American classic. It regularly appears in Best 100 literary lists and has been adapted many times for film, theatre, and opera.

This new adaptation is conceived as a dramatic monologue, a one-hander brought to life by the much-loved cabaret star Paul Capsis.

As the show opens, we see a circular stage with a couple of old bentwood chairs, a small desk and a leather-bound notebook. These few items are the only props Capsis needs as he tells the story of the people who lost their lives when the eponymous bridge collapsed in July 1714. The ancient Incan structure, a rope bridge across the Andes, gave way and five random souls were dead.

At the heart of the novel, and this play, are questions about fate and destiny, the meaning of life, and the search for truth. It is billed as a ‘fabulist’s depiction of a world filled with conspiracy, seduction and betrayal’.  And as the South Australian Premier, Steven Marshall, astutely observed at the opening night after-party ‘it sounds like every day in politics!’

Capsis is unashamedly brilliant, strutting the stage in a deep blue flamenco dress as he embodies the character of Camila Perichole, the greatest Peruvian actress of the time, to tell the stories of those who died. How were their lives intertwined? And what took them to the ill-fated bridge on that particular day?

He is accompanied on stage by two guitarists, Slava Grigoryan and Manus Noble, both acclaimed musicians.  Their playing haunts the theatre and sets the scene with overtones of classical Spanish guitar music and hints of folksongs of old.

The music was composed by Slava and his brother Leonard Grigoryan and acts as much more than a backing track – it heightens the tension, sets the scene, and illuminates the emotional journey of the characters.  From strains of Ave Maria to Sia performing in old-lady underwear, the music is rich, eclectic, and an integral part of the performance.  The Bridge of San Luis Rey is being presented as part of the Adelaide Guitar Festival, so it’s only fitting that the music should be so central to the performance.  The lighting too, by Gavin Norris,  gives this production added layers of atmosphere. And the intimacy of the Space Theatre adds to the emotional intensity of the play.

This is a satisfyingly bold adaptation by playwright Phillip Kavanagh for Adelaide’s Brink Productions and is staged with superb direction by Chris Drummond. They indulge the whims of Camila Perichole – she is a diva, after all – to give the play a very contemporary grounding. It somehow feels authentic and modern, not just a theatrical curiosity or period piece.

As the play is coming to its climax, Capsis utters the famous quote from the book that has been used in so many esoteric settings over the years:  ‘There is a land of the living and a land of the dead and the bridge is love, the only survival, the only meaning.’ Indeed, is there anything else?