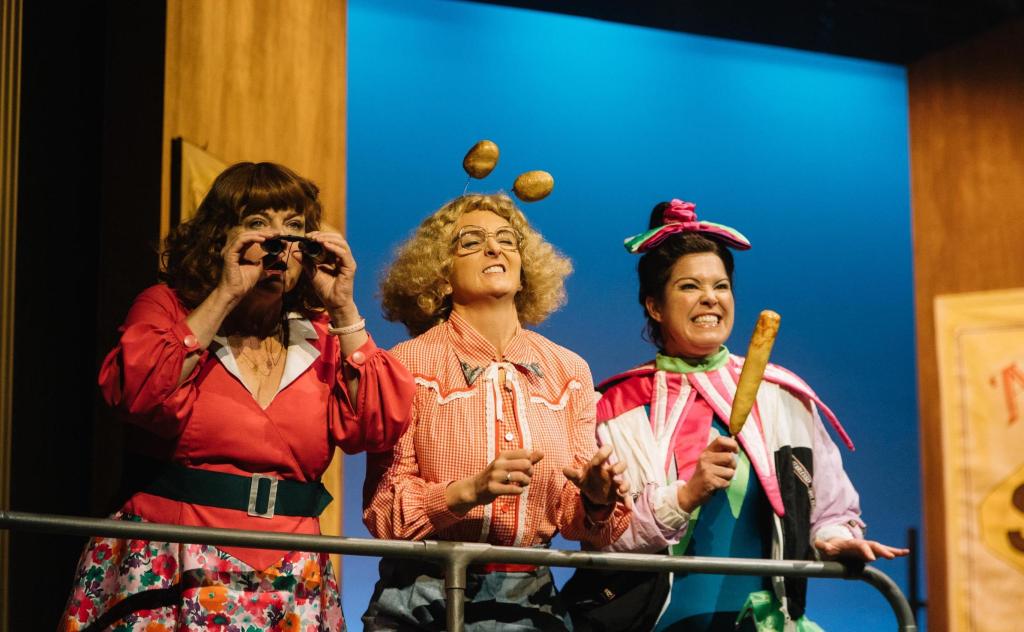 It is always a treat to see new Australian work but perhaps it doesn’t need to scream ‘I’m Australian’ with quite such a loud and laconic drawl? Photo credit: Thomas McCammon

The fictional town of Appleton – population 1,557 – could be any country town in Australia. In Appleton, they have pubs, pokies, and potatoes. Times are tough for the locals and quaint old traditions like the annual Potato Race have an important place in the psyche of the town. Each year, the race competitors hoist a sack of spuds onto their shoulders – 50 kilos for the blokes, 20 kilos for the sheilas – and run around the oval in the hope of winning a sash and the prize purse. And therein lies the problem – the men are competing for $1000 but the women’s race offers only a mere $200.

Confronting this clear inequality is the catalyst for conflict, pitting friends, neighbours, and family members against one another. This is a battle that will be fought out very publicly thanks to Facebook and GoFundMe.

Returning to her home town after many years living in the city, GP Penny Anderson, played with determination by Anna Steen, is the one to light the touchpaper. And yes, she’s an educated vegetarian lesbian, so she would have to be the champion of all that’s right and politically correct. This one piece of predictable characterisation encapsulates all that’s sadly wrong with this play. The small-town locals are caricatured as uncultured and unsophisticated. Their men-folk, who are all
unseen as this is a women-only five-hander, are universally portrayed as lazy, dead-beat, drug-smoking, pokie-playing losers.

It’s a pity that playwright Melanie Tait adopted such superficial characterisations. There is a huge potential here to really understand the characters and the challenges of change, but we need more nuance, more shades of light and dark. These feel like outdated cultural clichés rather than fully formed characters.

There is a huge potential here to really understand the characters and the challenges of change, but we need more nuance, more shades of light and dark.

The few moments of sensitivity are well-handled. We feel for Bev Armstrong, brought to life with great empathy by Carmel Johnson, as she stubbornly faces her own illness. Sarah Brokensha embodies single mum Nikki Armstrong with a powerful desperation. Brokensha also displays great comic timing as the outspoken parent/coach on the sidelines at Saturday sport. And the 1988 flashback scene is a comedic gem, accompanied by an iconic Aussie soundtrack.

Susie Youssef gives a convincing performance as Rania Hamid, a relative newcomer to the town who escaped the conflict in Syria. But her interaction with the Appleton locals just proves again what a bunch of yokels they really are. And this is such a shame, because the city/country divide really isn’t that stark these days, especially when the nearest big town is Bowral, a beautiful and very middle-class haven in the New South Wales southern highlands. We’re hardly in the back of beyond here.

The real star of The Appleton Ladies’ Potato Race is Genevieve Mooy as the irrepressible Barb Ling. Mooy graduated from NIDA some 40 years ago and has enjoyed a successful career across theatre, film, and television, and now also teaches at Flinders University and MAPS Film School. That vast experience just shines in her every moment on stage.

Designer Kathryn Sproul has created a versatile set emulating that most ubiquitous of Australia materials, grey corrugated iron. The simple opening scene, a solitary table and two chairs, says all it needs to say.

It seems rather fitting that State Theatre Company has chosen to stage The Appleton Ladies’ Potato Race in the faded surrounds of The Royalty Theatre, usually home to am-dram shows and calisthenics competitions, rather than its usual home in the Festival Theatre. Melanie Tait says the play was based on real-life events in her own home town of Robertson, also in the New South Wales southern highlands. It premiered in Sydney in 2019 with a different cast and toured nationally pre-Covid. This iteration is directed by Elena Carapetis who has had a long and successful association with State Theatre Company.

It is always a treat to see new Australian work but perhaps it doesn’t need to scream ‘I’m Australian’ with quite such a loud and laconic drawl? Does this represent an inverted cultural cringe? Maybe so.

The five performers on stage were all immensely talented and engaging. There was even a voice-over from local newsreader Jane Doyle who was in the house for opening night.