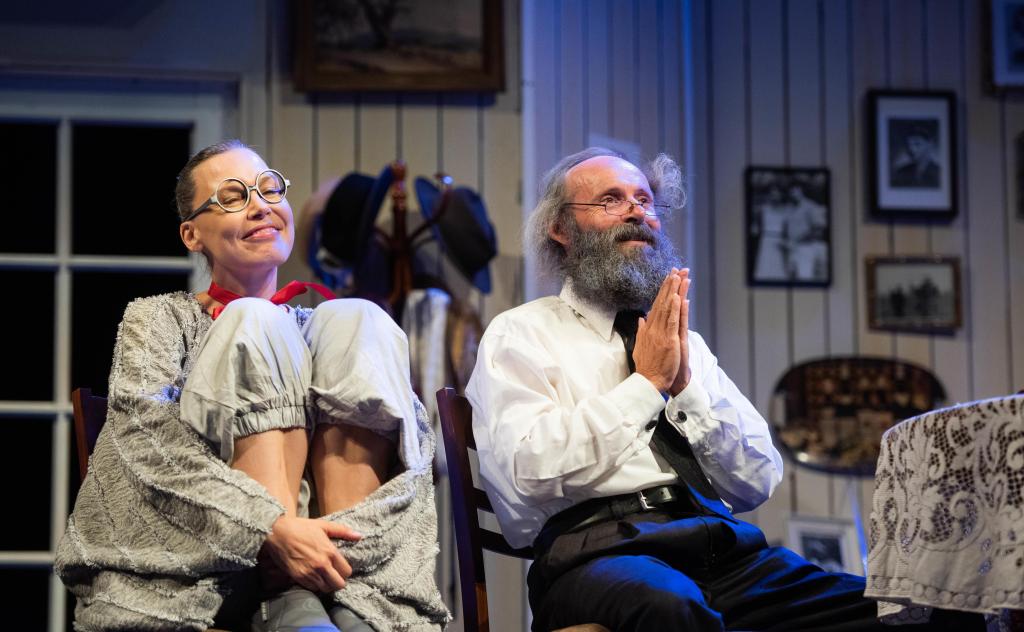 Not only did this outstanding performance welcome a season of the Angela Murphy play, Prospect Terrace, that was much too short, but it also welcomed back dramatic theatre performances in Cairns at a Performing Arts Centre that still seems new.

After so many months of social distancing, the audience seemed to appreciate how lucky we were to be here on this opening night, judging by the smiles and enthusiastic greetings. For a while, we could sit here with each other and laugh and cry together in response to someone else’s family problems revealed within Murphy’s crafted lines of subtle social comment.

Despite its balcony tiers, the CPAC Studio’s excellent acoustics and visibility invited the audience to share in the intimacy of the experiences and emotions of those on stage and, judging by the audience responses on Friday night, the cast achieved that with great success.

We became thoroughly involved with this conflicted family there in the living room of the house on Prospect Terrace as they attempted to come to terms with the future of their 80 years-old father, Jack, and so too with the prospect of a future without him and their home.

The cast of Prospect Terrace by Angela Murphy. Photo: Supplied.

Director Karen Crone and producer/writer Angela Murphy assembled an experienced and tightly-knit ensemble cast of Andy Bramble as Jack, Andrea Allumay as his confidante Dolores, and Liz Christensen and Natalie Taylor as Jack’s daughters, Bunny and Pepper, who are as different in temperament as their names suggest.

With the exception of Murphy’s brilliantly original use of Dolores (who seemed rather overly-vocal and eccentric until we understood why) as the dramatic Greek chorus that comments on the character’s context, actions, and motives, this father and his daughters are familiar character types.

Jack is ageing and cranky and doesn’t want to leave the family home, Bunny is the faithful care-giving younger daughter, and Pepper is the older daughter who has borne the responsibility of working to the detriment of her own family life and isolation from her daughter, carrying her own guilty secret motivating her desire to sell the house.

However, as much as we feel we know them, these finely wrought characters are the medium for a timely and relevant message about some serious issues with which many families are attempting to cope.

As well as the decisions about Jack’s will and power of attorney that the family will have to make, there is also the ever-present elephant in the room: the fate of the family home and its contents. These will not be easy decisions to make: this dysfunctional family will have to deal with some unpleasant truths about each other before they can agree about any of this.

Sadly, Bunny and Pepper’s predicament is a common one in this era of an ageing population and privatised aged care in which we are all too aware of the risks of having our loved ones in care during a time of pandemic, and Murphy cleverly employs this common experience as back story so that the audience is nodding their heads in recognition right from the start.

Murphy’s tight and relevant lines present a fresh, regional context to this universal tale. This family home is an original Queenslander, after all, surrounded by a veranda and frangipanis and the notes of songbirds. Nigel Pegrum’s evocative sound design was vital in creating the place surrounding the room within which the play unfolded, as well as subtly underlying the tension.

Set and costume designers Simona Cosentini and Simone Tesorieri’s designs invited us into a room we recognised with its clever details: when pictures were taken down from the walls of this time capsule room, for example, the paler outline of them on the aged wall was revealed.

In fact, the real beauty of this play lies in that recognisable familiarity of characters and setting. These are characters we recognise in a location we know, attempting with all their family baggage to face and cope with situations many of us as human beings have either faced, will face, or know someone else who has. In some way, we all know this family and their house on Prospect Terrace.

Chrystopher J Spicer has written extensively about Australian and American arts and culture in such books as Clark Gable: Biography, Great Australian World Firsts: The things we made, the things we did, and The Flying Adventures of Jessie Keith ‘Chubbie’ Miller. He is currently a cultural historian and a Senior Research Fellow (Adj) at James Cook University, Cairns, Queensland.