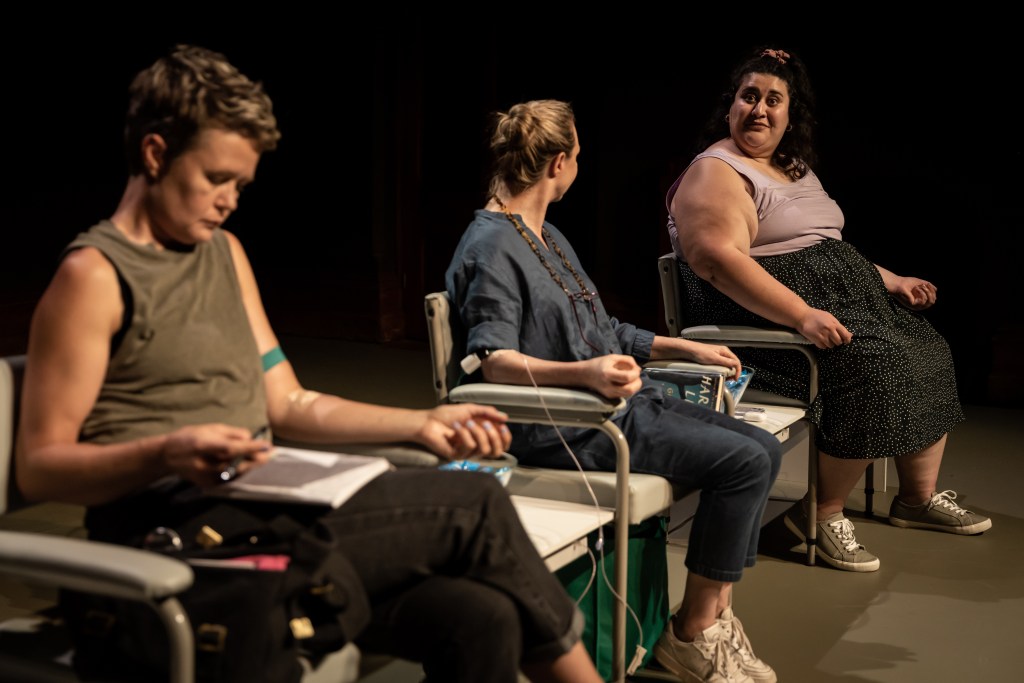 Desire, says Buddha, is the source of all suffering; it’s a kind of trauma we inflict on ourselves. Olivia Satchell’s new play let bleeding girls lie is primarily occupied by this notion of trauma, and the subsequent desire to be reconciled with it, to master it, and to be rid of it.

The play’s premise is straightforward. Three women, all donating blood at a clinic somewhere in Melbourne, are jolted into a sharpened state of vulnerability as they watch live coverage of the Manchester Arena bombing. Rattled by the tragedy unfolding before them, each woman is forced to relitigate her own internalised traumas.

Juice (Chanella Macri), a young woman newly arrived in Melbourne, has fled her family in Sydney after the death of her twin sister; middle-aged Lou (Emily Tomlins) has remained an emotional and psychological outsider since being bullied at a young age; and Grace (Belinda McClory), a nurse for 25 years, is finally beginning to break down beneath the weight of all she’s absorbed during her career.

The discussions unfurl along a series of loosely connected lines, the women trying to get at the heart of what pains them specifically, and women broadly, by ostensibly the most indirect route. Giving blood leads onto blood tasting like steak, which leads onto cortisol, which leads onto fear. A retelling of the Orpheus and Eurydice myth is trotted out, as are the usual critiques of the ‘if it bleeds, it leads’ violence-as-content philosophy so pervasive in our media since the 60s.

The set is sparse, adorned solely by a clock in the background with a seconds-hand only. The women sit facing outwards, along one plane, their arms tethered to their chairs. This allows for the show to explore its concept of internalised trauma within a context of exterior banality, anonymity even. Indeed, the interior/exterior dichotomy is explored in a number of ways, most notably by the removal of bloody objects from the mouths of each character at certain points of attenuated emotion throughout the play. Besides the sheer well-doneness of these moments – the fact that they’re pulled off in live time – they tend to strike as an overly explicit metaphor, and feel somewhat academic. A very VCA-grad sort of instrument.

As the questions grow more searching, the façades that each of the women present to each other gradually winnow away. Much of the heavy lifting therein – the searching questions, I mean – is done by Grace, played stunningly by Belinda McClory in what constitutes by far the best aspect of the play. She makes of rather middling material something expansive and true, inhabiting a self-belief tainted with exquisite gradations of furtive anguish. Perhaps because her traumas are connected with female ageing, whereas the others’ aren’t, there’s a multiplicity of meanings always underpinning Grace’s words. ‘It’s like I can’t even trust my own body anymore,’ she says, in a very real moment of crystallisation. ‘It’s just spooling away from me.’

Also good are Macri and Tomlins, although their performances never transcend in the way McClory’s does. They’re acting, noticeably: all the lines are delivered, all the gestures are affected. But what their performances do provide is an underscore of compunction, one that speaks to a deeper desire to let it all out. And this compunction is what makes the show, in certain periods, compelling: that there always seems to be more that each character wants to reveal, so that the audience is simply waiting for the moment when the thread binding these three women finally snaps.

But it doesn’t snap – at least, not really. There are moments when Satchell wants to give us the impression that it’s snapped – in other words, wants us to emote. I have noticed this a great deal recently across many kinds of performing art. Certain films and musicals and plays seem bound by a necessity to make the audience feel, so that moments of heightened emotional or psychological catharsis are overplayed, overexplicit, over-elaborated. They strain towards pathos, and in the end come up empty handed.

Let bleeding girls lie is also guilty of this. Though the conversations had me engrossed for most of its duration, the play is not strong enough or bold enough to generate any real emotion when required. It’s all pitched at too high a register, begging for the audience to feel something in a way that, by the end of the play, becomes rather unseemly.

But because the play is wedded to strong enough actors and an interesting enough concept, all of its over-elaborateness can be forgiven. That is, until the final scene: a coda so trite, so forced, and so tendentious that all of the earlier good work is, like Grace’s equilibrium, unspooled. It’s yet another plea for the audience to feel, the most unforgivable yet. And it’s an unfortunate way to end what could have been, and what was in moments, a dynamic examination of the way women internalise suffering in the modern world.

let bleeding girls lie will be performed until 19 December 2021