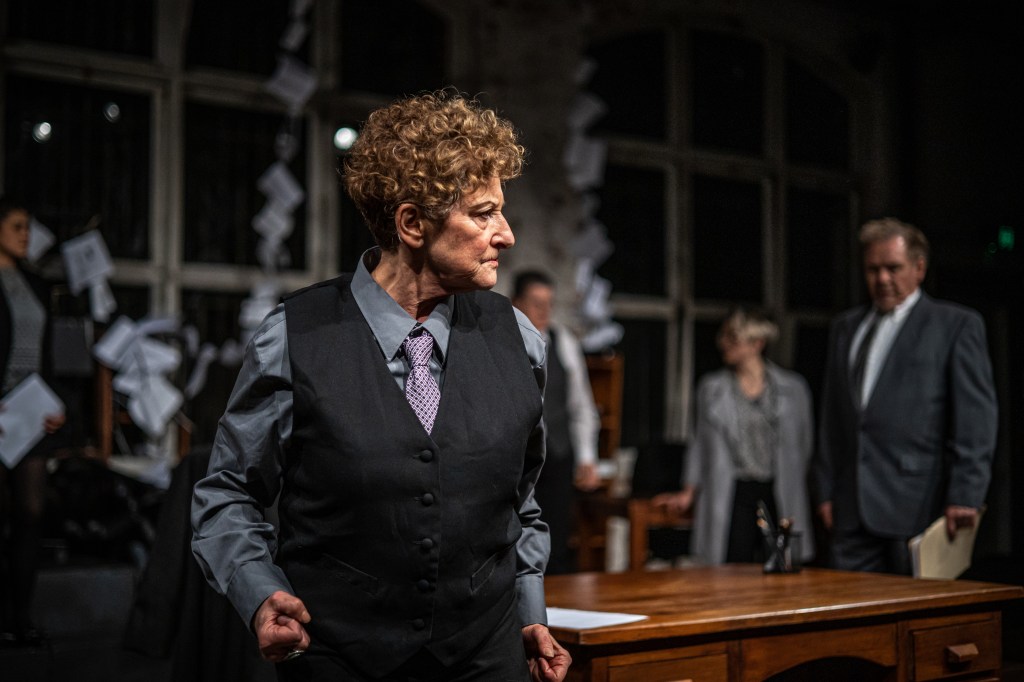 Evelyn Krape is majestic as Lear. Picture by Chelsea Neale.

Melbourne Shakespeare Company’s King Lear is a gender-fluid, dynamic production. Remounted three times due to COVID cancellations, the company has responded to the times by mounting a Lear that is true to the production’s expansive vision of humanity and identity. The cast is diverse in terms of age and race and each member brings a unique twist to make their characters memorable. Also notable is the innovative use of fortyfivedownstairs’ signature space: a throne cleverly constructed of stairs and mesh-backed swivel chairs that adds an imposing air of authority. Loose pages scattered at various points throughout the production remind the viewer of a society forever changed by the arrival of the printing press and the original knowledge technology: the book.

Marshal McLuhan’s classic text, The Gutenberg Galaxy (1962), begins by interpreting Lear as a play that captures a society in transition from a feudal system based on jobs to a capitalist system based on jobs. So it is that Cordelia, capably played by Isabella Ferrer, rejects Lear’s love test and in doing so rejects the notion that the king can retire. Melbourne Shakespeare Company’s modern and perhaps anachronistic reading of the historicised Lear is to play it against the grain by trying to get us to sympathise with the sisters who ‘claim to love their father all’ and limit his ‘riotous’ carousing with his entourage. Thanks to Claire Nicholls’ and Annabelle Tudor’s nuanced and sometimes amusing performances the audience is able to empathise with Regan and Goneril coming to terms with the constraints of an ageing relative. Sympathy also extends to Matthew Connell’s Edgar, who rejects the system of title that keeps him, as an illegitimate child, from inheriting property. For a play that was written in 1606, Ayesha Gibson’s directing brings to the surface surprisingly contemporary resonances.

In the title role, and in a gender-flip casting, Evelyn Krape is a queen, and brings the archetypal clowning of commedia dell’arte as well as the canon of Melbourne’s Yiddish language Kadimah theatre to her acting. As a Jewish-inflected Lear, she has dignity and pathos. She really shines in the final scenes when she’s a prisoner of war with her most beloved daughter. There, she brings light and shadow to transform a maternal energy into an almost Jungian dynamic of comedy and tragedy. Her many colours are viewed to their fullest range in the play’s penultimate act, when locked out in a storm and hearing voices, her earthy preoccupations return in an unearthly way. These scenes remind the viewer of Shakespeare’s compassion for the most unlikely characters. Anthea Davis as Gloucester and Kayla Hamill as Edgar provide realistic psychological realism that counterpoints Krape’s fantastical performance.

King Lear was performed from 20 July to 1 August, but a live recording of a performance can be seen online from 4-18 August 2021.