A muddled production, with the story lost amid the technological wizardry,
Anna Westbrook 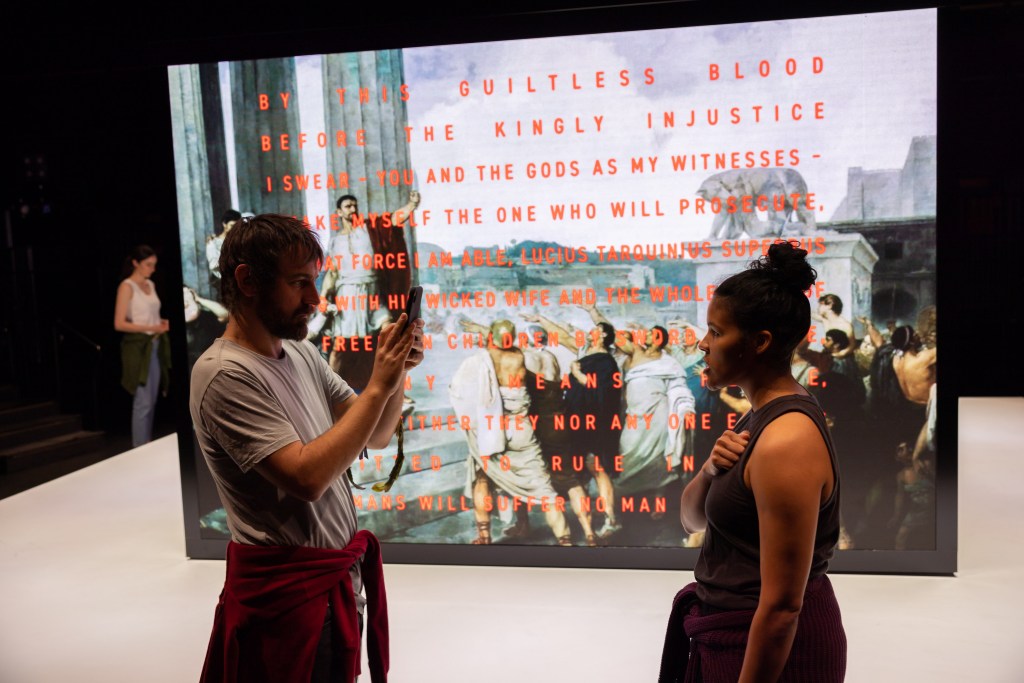 ‘Given the global moment of ascendant authoritarianism and riots in democratic capitols, staging Caesar is timely.’ Photo by Daniel Boud.

It is difficult to watch any new production with the ramped anticipation built on the triumph of the director’s last work, in this case the visually and technically rapturous The Picture of Dorian Gray pulled off as a one-woman show by Eryn Jean Norvill.

There, Kip Williams’ cleverness with screens and cameras, perspective and manipulation, was a hand in glove fit for Wilde’s dissection of narcissism. Williams’ stab at Caesar however, seemed off-balance from the start, unsure how to manage the live acting with the pre-recorded, not knowing if the tone was committed satire, or whether to keep some reverence for the soliloquies that make the skin prickle at the gravitas of the language. Williams’ bare stage in-the-round, with a white cube of screens that rise and drop, creates a cold, depopulated distance, a lack of thrumming energy, and an odd tension that has the audience laughing in moments where it seems more appropriate to weep.

Williams employs three actors: Zahra Newman predominantly as Brutus, Geraldine Hawkewill as Casca and Mark Antony, and Ewen Leslie in a sometimes-confusing decision to play both Caesar and Cassius. While all were strong and committed performers, who tried their utmost to activate the empty space, the production misses the point of Julius Caesar in that anarchy is always attendant to the mob and three actors cannot a mob make.

Given the global moment of ascendant authoritarianism and riots in democratic capitols, staging Caesar now is timely. Yet Williams appears to change directorial course midway, from taut and intimate conspiracy to bombastic screening of anonymised newsreel violence. The murder of Caesar is rushed, gratuitous, gauche. Brutus and Cassius playing in the spilt blood undermines, at least for Brutus, the agony of his ambivalent conscience. The slaying of the poet Cinna, one of the most poignant moments of any Shakespeare tragedy – where the rioters first suspect Cinna as a conspirator, discover he is not, and kill him anyway – is almost entirely lost.

So much of the play is abridged (bringing it down to a sparse two hours) it is branded a ‘retelling’. The actors begin in casual wear, as if the audience has stumbled into an early rehearsal, only to change into togas, and then into the ubiquitous uniforms of Western politicians. The gender-blind casting of Hawkewill and Newman is unproblematic, but then why scratch the live roles of Caesar’s wife Calpurnia and Portia, Brutus’ wife? A snippet of the famed warning given to Caesar by Calpurnia is played:

‘A lioness hath whelped in the streets;
And graves have yawn’d, and yielded up their dead;
Fierce fiery warriors fought upon the clouds,
In ranks and squadrons and right form of war,
Which drizzled blood upon the Capitol.’

This foreboding is imbued with power that dissipates in the play’s final act as it becomes more and more distracted by its own technological tricks and parody, such as when Mark Antony’s speech is mangled by contemporary political soundbites delivered by Hawkewill in power-suit and heels. The audience found this amusing, as they did the Zoom conference of Antony, Lepidus, and Octavius planning war – but the potential affective resonance of bad decisions made by ostensibly good people drowns in the comedic turn for what is ultimately a cheap laugh with no bite.