THEATRE REVIEW: I Love you Bro

After rave reviews at the 2007 Melbourne Fringe and the 2008 Edinburgh Fringe Festivals, writer and theatre maker Adam Cass has finally been given the opportunity to take his production of I Love you Bro to the big stage – or so to speak.
Melynda von Derksen 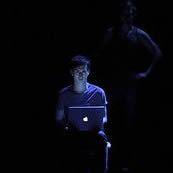 After rave reviews at the 2007 Melbourne Fringe and the 2008 Edinburgh Fringe Festivals, writer and theatre maker Adam Cass has finally been given the opportunity to take his production of I Love you Bro to the big stage – or so to speak.

I Love you Bro is based on the real life and bizarre story of a 14 year old Manchester schoolboy called ‘John’ and his attempt to not only engineer his own murder, but implicate another young boy named ‘Mark’ in the process.

The story goes something like this:
John is a young and lonely teenager living a miserable existence with an abusive stepfather, a downtrodden mother and no friends. He spends most of his time on a chat site where he is logged in as ‘Alba J’. One night he comes across a fellow chatter logged in as ‘Marky Mark’ and the exploits begin.

Marky, mistaking Alba J for a female, suddenly and unwittingly becomes entangled in a web of lies, deceit and fantasy, all created by John’s extraordinary and sophisticated mind.

Not only does John let Mark believe he is a female, but falls in love with his innocent victim, getting him to dance naked for him in front of a webcam and referring to his penis as his ‘boogie night’. Mark, however, never gets to meet Alba J or ‘Jess’ as she is really called and instead gets led down the garden path by John who creates a whole host of other characters to thicken this already sinister plot.

So besides Jess and her so called ‘step brother’ John there is ‘Leo Cap’ (Jess’s real little brother), ‘Stings’ (the gangster that threatens and murders everyone off) ‘Jane Bond’ (A secret service agent who also gets murdered) and finally ‘Agent 47695’ (another secret service agent who not only seduces Mark into ‘dancing’ for her but ultimately convinces him to commit murder).

Are you keeping up? I certainly did even though it was challenging at times.

In essence all of these fictitious characters are John, and his so called brain tumor (another lie), confused sexuality (because he wasn’t really gay), more lies (good an bad), and finally a murder plot (his own) were enough to compete with, if not top, any skilled writer of fiction.

Although I found the actor’s strong Manchester accent difficult to attune to at first, the excellent performance that Flanders gave and, ultimately his delivery of this difficult but very convincing accent, only enhanced the depth, complexity and credibility of the script and the characters within it.

Brilliantly written by Cass as a one-man monologue, with strong direction from Yvonne Virsik, this play will make you re-think the pros and cons of communicating in cyberspace ever again.

On a final note I hope to see I Love you Bro performed on big stages in other parts of the world with the same rave reviews that the play has received so far.

I LOVE YOU BRO
WHERE: THE MALTHOUSE THEATRE
WRITTEN BY: ADAM J.A.CASS
DIRECTED BY: YVONNE VIRSIK
PERFORMED BY: ASH FLANDERS

“After constructing a fantasy world of girls, spies, and villains in an MSN chatroom, a lonely 14-year-old was found in a deserted alley with nearly fatal stab wounds. He survived, only to be convicted of inciting his own murder… ‘I love you, bro,’ Mark told his younger friend as he plunged in the knife.” Vanity Fair.

Based on real events that took place in Manchester, 2003.

Melynda is a Melbourne based freelance photographer, arts manager and fashion stylist who enjoys creating her own projects and reinventing herself on a continual basis. Graduating from the Victorian College of the Arts in 1996 where she majored in technical production in theatre, she has worked as a lighting designer, stage manager and theatre all rounder for many of Melbourne's best known creative companies. Eager to expand on her professional career, in 2004 she undertook a post graduate degree in arts management at the University of Melbourne. Since then she has worked in the area of arts administration and has used her skills to coordinate many successful cabaret events around town. As well as being part of the La Mama family for almost a decade, she continues to stick her finger in every type of creative pie that life has to offer. She is currently researching and writing a photographic book based on the history of the Melbourne Punk scene (1977 - onwards), which she hopes will be published in the next few years.