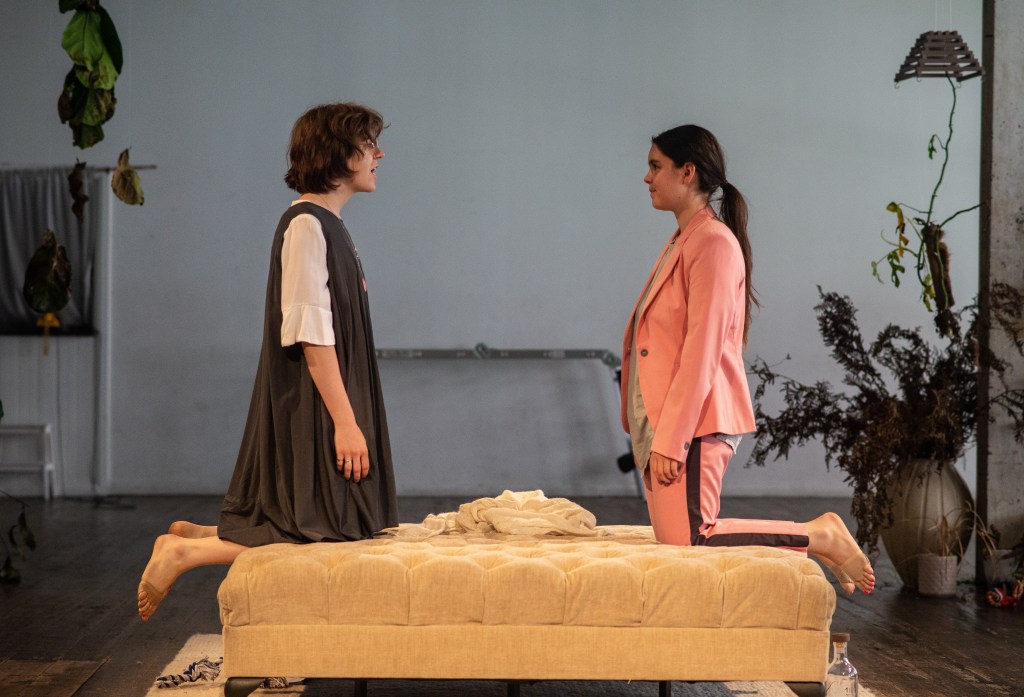 ‘Framed by a two-sided perspective, He /r renders its women as autonomous while navigating the tenderness of their attachment.’ Photo by Russell Williamson.

He/r caresses the tumultuous, intimate space between the personal and friendship with a playful production full of feeling. Across opening scenes, leads Isla (Stella Carroll) and Claire (Eva Rees, also the playwright of the piece) repeat the line, ‘When I met my best friend,’ and from here, He/r follows this promise of friendship through its sometimes generous, sometimes strained, sometimes homoerotic days.

Rather than centring their connection through the eyes of one protagonist, He/r cracks open their dynamic by exploring the perspectives of both friends. They bounce off one another, observing themselves and their friend with scrutiny and care. Set in present-day Melbourne and Sydney over their adolescent and young adult years, their narratives sometimes sync but often drift toward the demands of their personal lives, with special heed to Claire’s experiences of transitioning as a transgender woman.

Framed by a two-sided perspective, He/r renders its women as autonomous while navigating the tenderness of their attachment. Through a non-linear timeline told through obscure dialogue, Isla and Claire rift off interpersonal struggles and centre back to their tenuous solidarity with each other. The pair engage throughout the 75-minute performance, telling stories with a descriptive novelistic quality that often slips into an abstracted space between memory and the present.

On a neighbourhood escapade searching for a dog, Isla places her body on the ground and states, ‘I lie on the warm earth’, and Claire relates her version, ‘You stay like that for a long time.’ Like journals loosely interacting with each other, their way of speaking adopts a surreal, visceral quality. Rees’ inward-looking script constructs their exterior lives as hazy, with referenced relationships with parents and exes and pets remaining on the periphery. Tangible themes – mental health, body dysphoria, family troubles – are only skimmed by the narrative, overshadowed by emotions – loneliness, vulnerability, adoration, hope – without much concrete commentary emerging from the pair’s charismatic exchanges.

Expressive stage elements loosen their friendship’s intensity with whimsy. Dead houseplants circle an ottoman centre stage that’s positioned under a chandelier, complemented by a minimalist labyrinth of scattered ladders and holes in the walls where Isla and Claire sometimes appear like floating internet chat heads. A far wall expands the production beyond its central character dialogue: a lonely telephone ringing, ambiguous pink scribbles, superimposed projections of chatrooms, emails, and vintage cinema. Light evolves and reacts across the set with atmospheric shadow work. Sound, too, canvasses Isla and Claire’s inner worlds, traversing from dainty chirping birds to piercing white noise. He/r ebbs within this absurd dreamscape contrived by individual talents within the creative team.

A non-linear narrative spun by its emotional axis risks not engaging some audience members with more substance. But, whatever the outcome, He/r doesn’t shirk away from its sensitive nature. The production centres on the unfettered psychology of queer women, coming full bloom through organic emotions instead of a clear cut socio-political takeaway. Although teetering toward overly stimulating and elusive, He/r mediates friendship with a raw, mesmerising quality.