This satirical survey about the downgraded status of the arts in higher education feels frighteningly real.
Helen Hopcroft 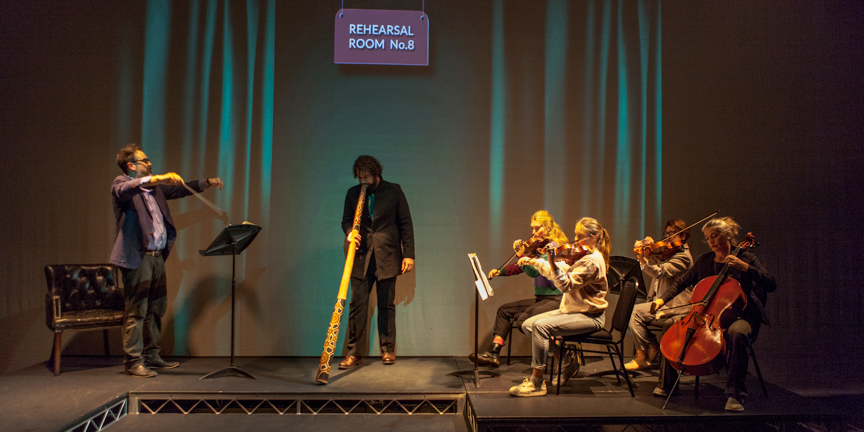 ‘Many incidents and characters precisely echo the recent history of the NSW tertiary sector.’ Photo by Elena Gan.

Creativity is a new play that tells a story achingly familiar to many universities in Australia and abroad. A regional university’s conservatorium finds itself facing funding cuts, course cancellations and a leadership void after the abrupt resignation of their faculty head.

Following this resignation, Dr Richard Fenchurch – a Mozart scholar and archetypical nice guy – takes up the leadership helm on a temporary basis. Fenchurch faces a dilemma familiar to small nation states during times of superpower aggression: should he negotiate a deal with the university’s ruthless executive? Or should he accept that conflict is inevitable, as the deal they’re offering will essentially destroy the conservatorium’s raison d’etre?

With the stage set for a showdown between him and the university executive, an anxious Fenchurch attends a meeting with the marvellously insincere Professor Graham Gombold. Sporting a shiny suit and an excellent bottle of pinot from a Northern Californian vineyard, Gombold smoothly justifies the funding cuts and chips away at Fenchurch’s sense of self-efficacy.

At the beginning of the meeting, Fenchurch staunchly refuses a glass of pinot. Then Sally Swaines, the university’s glamorous head of marketing, unveils a model of a white building shaped like a wedding cake. It’s the Mozart Hub – a new building that will be dedicated to the study and commercialisation of all things Amadeus. As a contemporary play on the Faustian pact, the beautifully shaped hook of the Mozart Hub is used to skew Fenchurch’s moral compass. By the end of the scene, he’s clutching his glass of wine like it’s a life raft.

When Fenchurch later brings the Mozart Hub proposal to his demoralised staff, Dr Lucy Golding – a cellist and Scarlatti scholar – articulates a more sceptical view of the executive’s motivations. Fenchurch has been told that the Hub will be built on a ‘grassy knoll’ opposite the chancellery. But Golding tartly notes that the after the recent flattening of the Drama Theatre, and axing of Classics, Philosophy and Fine Arts, he should ‘expect to see a lot of grassy knolls on campus’. Throughout the play, Golding functions as Fenchurch’s conscience, and finally as the warrior telling her general that the battle has been lost.

An enormous and articulate rage animates this work. While the characters are mostly stereotypes, they effectively symbolise real arts and humanities academics. Increasingly neurotic, paranoid and overworked, their mental and physical health disintegrate with each new round of funding cuts.

Simultaneously, the play adroitly notes the infighting and turf wars that characterise academia, the desperate scramble for funding and the importance placed on lobbying and personal relationships. The writing shows a keen eye for university politics, with the affable charm and acronym-rich jargon of the managerial elite.

Stand out performances include Melinda Smith’s depiction of the facile Sally Swaines, a marketing guru who periodically lets out an exuberant declaration that she is ‘so pumped!’ Smith holds the stage particularly well with Khalil Khay, who plays the unctuous Professor Gombold, with both actors convincing as power-hungry colleagues.

There is a memorable cameo by veteran actor Nola Wallace, in her role as Golding’s increasingly dependent mother, including an air conducting performance of Wagner’s Ring Cycle. And Louise Chapman, who plays Dr Lucy Golding, brings characteristic verve and some fine touches of physical theatre to the role.

Creativity feels retrospective in tone, like a historian mourning a war that’s long since lost. With the conservatorium demolished and no sign of funding being restored, Fenchurch and Golding reminisce about a lost era of creative freedom – and by implication, the end of free tertiary education in Australia – noting that ‘we were lucky to have had it’. At some moments the script points towards current and future developments in education, such as the digitisation of teaching, which sometimes feel clumsy. For example, a robot teacher named Cassandra Aiyoko spouts conflict theorist ideology and feminist critiques but at the same time serves only the interests of the ruling elite.

Read: Theatre review: I’m with Her

A number of the actors play instruments during the play, often exceedingly well. Yet most of the live music is by Mozart, which undercuts the play’s messaging around the importance of musical diversity, and one recital was so delightful that it temporarily disrupted the play’s ironic resonance.

While Creativity is presented as a satire, its references to the actual situation in Australian universities, colleges and art schools is so familiar that it sometimes lacks the literary comfort or chilling distance of fictionalisation. Many incidents and characters precisely echo the recent history of the NSW tertiary sector.

I was left wondering if the play is partly a pre-emptive strike to help protect conservatoriums and music faculties from future cost-saving measures. Ostensibly, Creativity is a play about the status of the arts and humanities in universities. But at its heart it asks vital questions about the purpose of art and education, presenting a dystopian vision of creativity in Australia.