A transportive, immersive, choose your own theatrical adventure.
Tahney Fosdike 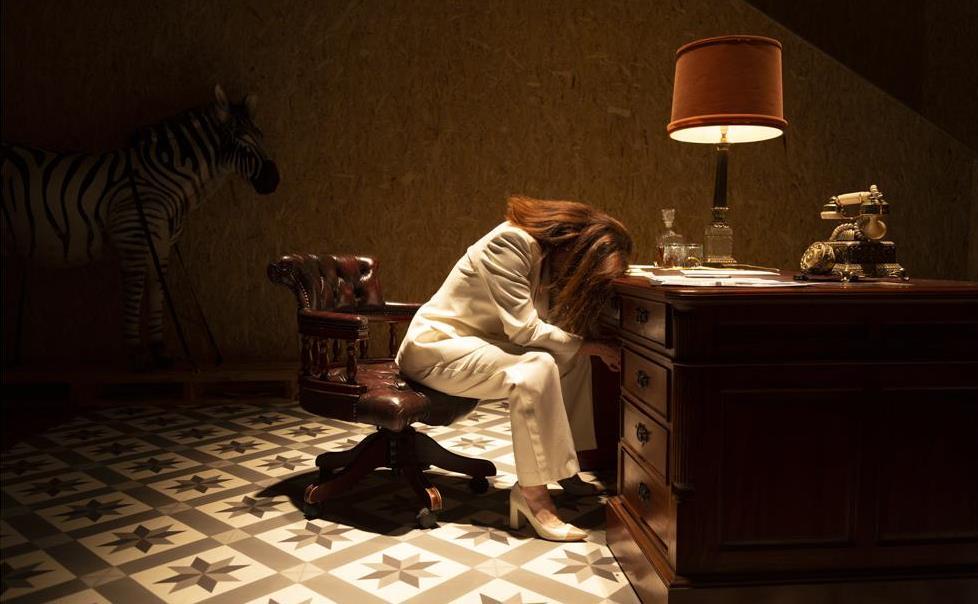 Inside a palace, a prince leans over a mahogany desk. His fist grips a glass of whiskey as he mumbles profanities under his breath. He is unaware of the ghosts surrounding him as they rummage through his confidential documents. You’re already unsure which of the dark figures is your friend. A light down a corridor catches your eye as it illuminates the graffitied wall of another space – you follow it.

With Because the Night, Malthouse Theatre rejects the familiar as it relaunches post-pandemic. Within the unfolding tensions of the fictional Elsinore, director Matthew Lutton presents an experiential fantasy production seen through a lush experimental lens. After being given a mask and cloak and told the rules of the experience, such as the prohibition of phones and talking, audience members enter via one of three entrances. From here, they continuously choose and shape their own adventure.

While the 1980’s Hamlet-inspired narrative comes about through individual exploration, it isn’t the main attraction. The audience steps into what feels like the final act of a play with magical realist vibes and Marxist undercurrents, set in a small logging town straining under the horror of its conspiring leaders. The six actors’ characters are portrayed at tipping point – screaming bloody murder at each other – and it is the audience’s role to play catch-up before the fictional world collapses in on itself.

Labelling the show as an ‘immersive theatre adventure’ could warrant different reactions – audience participation is fun for some but painful for many. However, Because the Night isn’t a draining, hands-on experience. The audience has no influence on the outcome of the show: like traditional theatre, the audience can’t speak and the actors can’t ‘see’ them. The uniform dress and silence grant invisibility while also providing the comfort of experiencing the production without self-consciousness.

More so, the immersion serves to bring the audience closer to the action; they are present without ever being present. With this intimacy comes envelopment as the set expands beyond a stage to a 30-plus-room universe. Because the Night lends a generous hand – it accommodates the audience’s immersion rather than the other way around.

One can stalk the actors around Elsinore, listening deeply and analysing their every move. A character might stand close enough to breathe down your neck as they deliver a rageful monologue. In these moments, it is soul-altering to be in the space of human passion without the pressure to interact with it.

Alternatively, one could take a more prying approach by getting on your hands and knees to pick up diaries, leaflets and newspapers, forming the story through collective clues. Yet despite the thrill of the chase, there may be little success in trying to piece together a cohesive narrative. It’s easy to be so dazzled by Because the Night’s points of difference that you overlook a lack of depth to its themes. Thus, as a third option, an audience member could ignore the urge to play detective or find meaning, and instead spend the night adrift in sensory splendour, exploring the seemingly endless spaces and their tactile details without reaching the end of the large-scale design’s intricacies.

Malthouse blesses the Melburnian who has been craving such a transportive journey. This escape-room-cum-theatre spectacle comes to town with a sense of urgency. Although the season has now been extended, it is sure to continuously sell out through word of mouth alone. Advice: don’t overthink the price tag. Book your ticket, quick. Unless flying across the trans-Tasman bubble, the only way to elude Australia’s tight borders might be to escape as an Elsinore ghost and freely travel to another realm – if only for the night.