A courageous and clever adaptation of Euripides’ ancient play with contemporary relevance and more than a little political bite.
Suzie Gibson
[This is archived content and may not display in the originally intended format.] 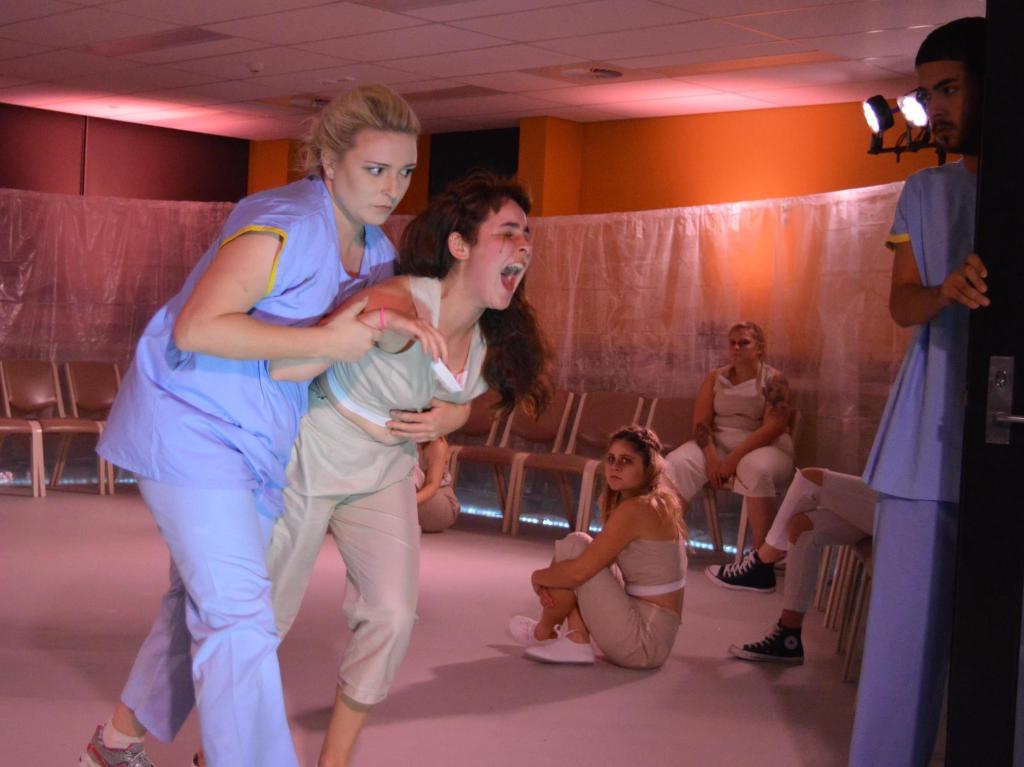 Adam Deusien’s and Nina Oyama’s astonishing adaptation of Euripides’s ancient play The Trojan Women (415 BC) has contemporary relevance and more than a little political bite. Audiences assemble in a sanitised building, known as the new ‘Engineering’ section at Charles Sturt University, Bathurst. At the point of buying one’s ticket audiences are already (and unknowingly) on stage. The theatrical space we occupy begins in a foyer that is only remarkable for its extreme cleanliness. Such hygiene should not be disturbing but it is. The scent of an institution – of a place that houses individuals as well as incarcerates them – cannot be shrugged off.

A deeper sense of the sinister creeps in once Ben Rodwell’s spooky music is unleashed. Who could ever think that such a clean new building could be so menacing? One of the room’s spotless walls beams images of traumatised, sick women. Audience attention is drawn to this monitor that is perhaps too familiar; our everyday lives are mediated by many screens, just as countless surveillance cameras capture our every move in real life’s public stage.

The women captured by the camera are all wearing beige garments. Audiences wonder if these women are patients in a hospital, or are quarantine cases or even perhaps insane? Could they even be asylum seekers in detention? All of these thoughts crowd the mind until an officious man adopting the identity of a medical doctor takes centre stage. He informs us that these women are being cared for, that their health is a top priority, but we know the opposite is true. Again anxious feelings concerning the power of institutions over individuals seize the imagination.

Like patients, prisoners or even refugees audiences are ushered into another room, one that is even more troubling since it is located at the heart of this bright shiny institution. Men in blue medical uniforms inform us sharply to sit at the edges of the room. The women on the screen are now before us in 3D. They all look ill and miserable. We learn that the city of Troy is a closely monitored quarantine hospital. But patient care is really about patient control. We come to experience viscerally the depths of human cruelty and fragility.

The borders of this room are closely guarded. Border protection is a major concern. Audiences are seated at the outer edges of this space and we cannot leave because we are all locked in. The head doctor, Meneloas, played by Alec McDonald, is particularly threatening. In this enclosed world he is a god and like the Almighty he determines the fates of all those within, including the audience.

This exceptional play is about Australia and the world we live in now. It is about hating and fearing difference whether it is perceived as sexual disparity, cultural, or even racial. It is also about killing people who are vulnerable and homeless, both physically and spiritually.

The Trojan Women is a collaborative production of fine young actors in their final year studying Theatre/Media at Charles Sturt University. The director’s vision is very present in the production’s intelligence and political acuity. Director Adam Deusien is a rising talent. He asserts: ‘theatre shouldn’t be an artifact in a museum since it must always have social, cultural and contemporary relevance’. This extremely courageous and clever adaptation achieves this aim and is not to be missed.

Presented by The Sprung Festival
The Engineering Building, Charles Sturt University, Bathurst
23-28 May 2016