The Testament of Mary

One of Australia’s greatest actors delivers one of the most tremendous performances of her career.
Reuben Liversidge
[This is archived content and may not display in the originally intended format.] 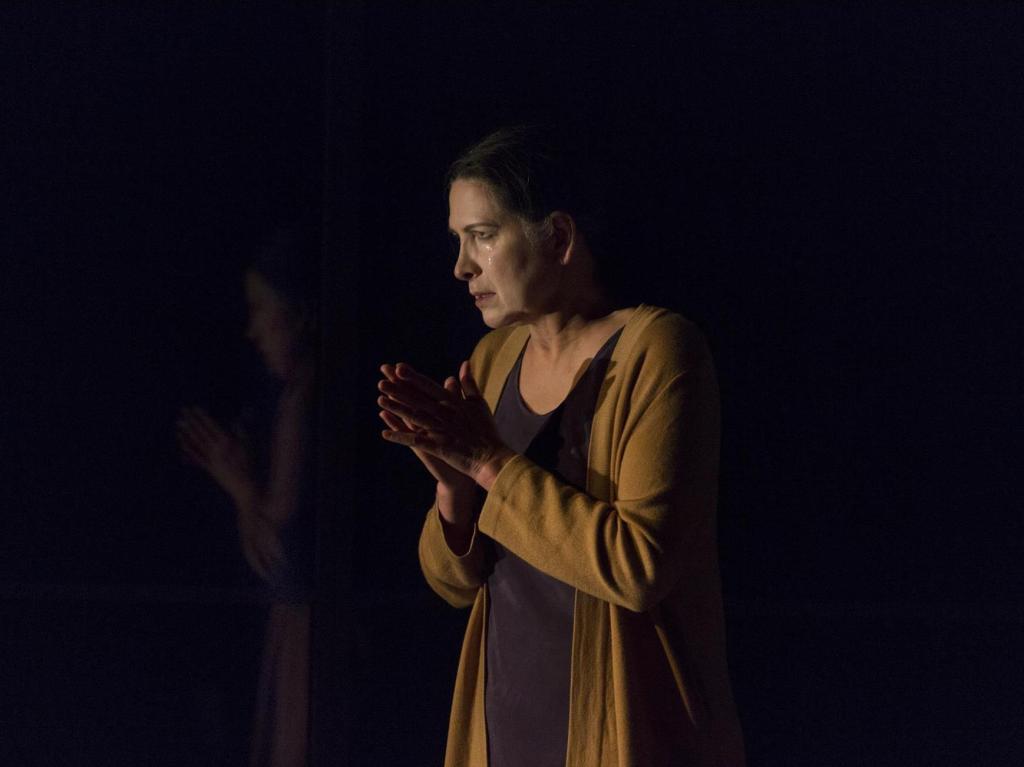 Colm Tóibín’s The Testament of Mary is a solo performance piece about a mother grieving the death of her son, however this mother just happens to be Mary and her son is Jesus Christ. The author and playwright gives fierce and commanding voice to a religious figure whose narrative has mostly been stricken from the Biblical record. His Mary tells the audience her version of the events in the life of her apotheosised son, from the resurrection of Lazarus to the devastating crucifixion. However, her story is really about so much more. Hers is a story of perplexity, danger, resilience and above all, truth. As Mary tells the audience: ‘I will say it now because it has to be said by someone once.’

Pamela Rabe returns to the Malthouse stage after her acclaimed performance as Amanda Wingfield in Eamon Fleck’s unforgettable production of The Glass Menagerie in 2016 and remarkably she is even more sensational in the role of Mary. This is an actor at the very peak of her career and in this powerful production she provides a master class in stage acting. It’s an expertly crafted performance of restraint and rage; a slow burning crescendo that reaches an almost overwhelming explosion of emotion. Rabe is an actor in full command of her theatrical powers and her riveting portrayal of Mary is full of pain, anger and bewilderment. She convulses in grief, stands as still as a statue and cries out in rage at the Gods. It is one of the finest performances I’ve ever seen on stage.

This Mary refuses to give her son’s disciples (whom she calls ‘misfits’) the version of the story they want and she makes her distrust of them clear from the outset: ‘…when I have seen more than two men together I have seen foolishness and I have seen cruelty…’ When recounting the awful events of her son’s death we are given a very different portrait of the woman described in the Bible. This Mary didn’t hold her son’s body as he was taken down from the cross, or bathe and wrap him in linen. This Mary had a much more human and truthful response. She noticed the small minutiae happening around the death scene, horses being fed and food being cooked. She didn’t scream or cry or rush to his side. She ‘watched in horror’ but ‘did not move or make a sound’. This may seem like a shocking reaction, but it’s human, it’s flawed and although she will always be haunted by it, Mary owns her actions and accepts the truth of the moment: ‘…what seems strange after all these years, is that I had the capacity to control myself, to weigh things up, to watch and do nothing and know that that was right’.

The Testament of Mary is dark and bleak, but Tóibín peppers in small moments of humour and levity, such as when Mary describes her neighbour Farina. ‘I could not understand her easily and she seemed to think that strange but it never stopped her talking.’ When she learns that the disciples want her son’s story to ‘live forever’ and ‘change the world’ she responds with ‘The world…all of it?’ Again the playwright is creating a multifaceted portrait of Mary to make her authentic to the audience and Rabe delivers these lighthearted flashes expertly.

Director Anne-Louise Sarks and her creative team support Rabe’s towering central performance by surrounding her with an impeccable production. All the design elements adhere to the central theme of making Mary real and truthful; there is no overt religious iconography and the apartment-like set is plain and offers no representation of time or place. The design duties are shared between just two people, Marg Horwell (costume and set) and Paul Jackson (lighting and set), and this close collaboration delivers a perfectly coherent vision. As they describe in the program notes: ‘The space … is about the absence of objects and structure, a place of exile, memory and displacement – not a home’. The audience remains in the dark about exactly where Mary is at this moment in time. Is she being hidden away? Is she imprisoned? Why is there no running water? A recurring image of Mary pressing against glass further emphasises this notion of being trapped.

Steve Toulmin’s sound design is just as integral to the success of this production. Carefully placed microphones amplify the tiniest and most mundane of sounds; an apple being cut, water being poured, even the act of untying hair becomes significant. Time and time again Sarks’ brilliant production begs the audience to see Mary as a real woman, to listen to her truth and witness her own story once and for all.

This heart stopping production of The Testament of Mary is the perfect way to end Malthouse Theatre’s 2017 season and the timing seems especially potent as we head towards the holiday season. This brave and blistering solo piece demands attention and will leave you emotionally exhausted in the best possible way. Do not miss the chance to see one of Australia’s greatest actors deliver one of the most tremendous performances of her career – this is once in a lifetime stuff.