A wonderful new musical by the National Theatre of Parramatta.
Lynne Lancaster
[This is archived content and may not display in the originally intended format.] 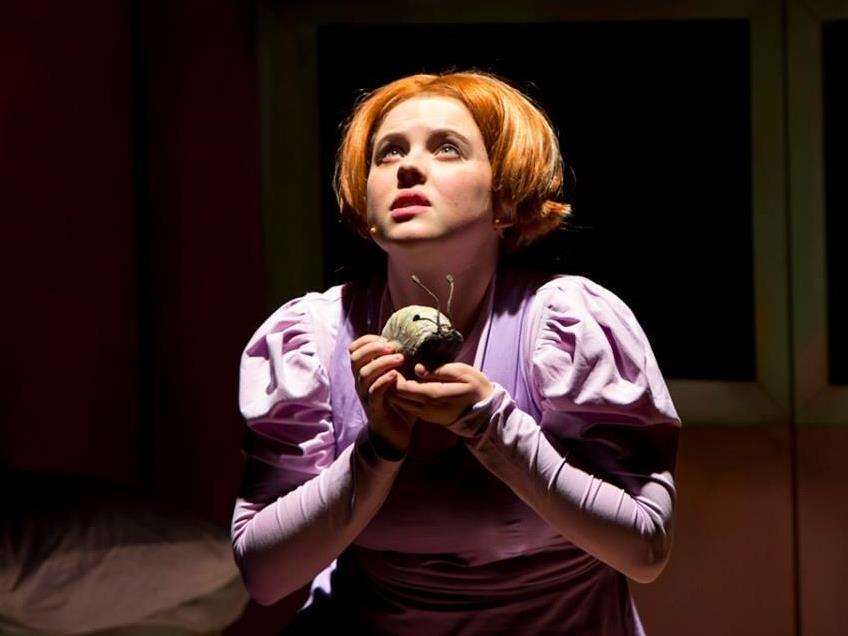 The latest enchanting work by the National Theatre of Parramatta (NTP) is The Red Tree, based on the much loved book by Shaun Tan, which won the Patricia Wrightson prize in the 2002 NSW Premier’s Book Awards.

Magnificently directed by Neil Gooding, it is a brand new Australian musical especially commissioned by NTP, with lyrics written by Hilary Bell and music by Greta Gertler Gold.

In this version, Ava, a red haired girl (Nicola Bowman) who appears to suffer from agoraphobia and depression, learns to deal with her scary and rather overwhelming emotions and cope with the outside, adult world. The show is set in Ava’s bedroom (note the framed picture of the leaf) and everything happens in her imagination. It describes emotions using metaphor and explores various monsters, landscapes, buildings, storms, sunshine and rainbows as Ava attempts to embrace happiness and face the world around her.

Visually it is great, paying homage to Tan’s marvellously detailed original illustrations. James Browne’s design features a 3-D set using projected images from the book as backdrops. There is fluid use of props and projections (sky, leaves, buildings, the sea) and some wonderful puppetry manipulated by kōken-like figures: a snail, a nautilus and a rather scary stone-like fish. Much fun is had with an origami paper boat at one point. The walls of Ava’s bedroom close in threateningly in one scene; in another Ava marks the days off on a wall like a prisoner.

Through her window, we can see the changes in the weather and the balloons and flying tassels of the parade that Ava misses as she hides from the outside world.

Verity Hampson’s lighting skilfully evokes moments of despair and fear, contrasted with excitement and hope, as symbolised by the leaf and the brightness of the red tree mysteriously materializing.

The score by Greta Gertler Gold is mostly catchy pop with infectious rhythms but is sometimes quite demanding and operatic and perhaps a touch scary. It includes the use of electric and amplified classical guitar, ukelele, kazoo and nifty percussion.

The three musicians (mostly at the side of the stage) also act as assorted ‘people on the street’ and so forth, blocking Ava with their umbrellas, joining the crowds at the imposing marble museum etc. In some ways they act as Ava’s inner self and the friends she would like to have.

Recent Victorian College of the Arts graduate Bowman as Ava is tremendous in this quite demanding role, singing and acting terrifically. She is an emotionally fragile, scared girl in a purple dress, for whom “sometimes the day begins with nothing to look forward to,” cowering in her bedroom while having adventures in her imagination.

Towards the end there is a rather scary section where Ava is trapped in the belly of a fish. How will she escape? The dice seem loaded against her. Until – a wonderful red tree appears growing in her bedroom giving hope.

The Red Tree fuses pop, classical and traditional musical theatre with sound design and digital recordings. The children in the audience loved it, watching enthralled – as did the adults. It’s for anyone who has felt miserable, lost or lonely and is about remembering that the world isn’t always as bleak as it may appear.