Opera Australia have got it just right in this glorious , rollicking romp of their production of 'The Mikado'. Great fun is had by both cast and audience in this revival by Stuart Maunder of Christopher Renshaw's 1985 staging.
Lynne Lancaster 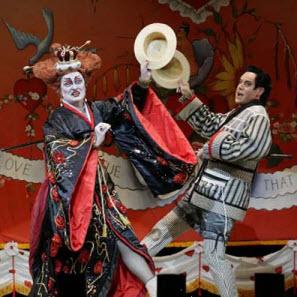 Opera Australia have got it just right in this glorious , rollicking romp of their production of The Mikado. Great fun is had by both cast and audience in this revival by Stuart Maunder of Christopher Renshaw’s 1985 staging.

One of the ‘big three’ of the Savoyard cannon ( along with HMS Pinafore and Pirates of Penzance it is a typical mix of Gilbertian British humour, a soupcon of Aussie irreverence, theatrical in-jokes and Sullivan’s glorious music. All gently poking fun at, Mother England supposedly in an ‘exotic’ environment.

There is a giant red lacquered wardrobe that the cast disappear into and a small red Japanese style bridge as in the ‘willow pattern’ plates .As well, there is the use of Kabuki- style ‘koken’ for discreet scene changes, removal of props, steadying the Mikado’s train, Katisha’s horses etc.

The front drop curtain indicates the tone of the show, a gleeful mix of the Far East, love and death, – alluding to the original 1885 production it has Her Majesty Queen Victoria in Japanese style dress and hairdo prominently central.

For the opening gentlemen’s chorus ‘If you want to know who we are’ where they introduce themselves they are moustachioed, wearing bowler hats, umbrellas and catching the Tube yet wearing kimonos. There are allusions to the chocolate boxy Victorian ‘Bubbles’ with the preparations for Yum Yum’s wedding. Also there is the spectacular red set design for the appearance of the Mikado and Katisha in Act two.

The cast is excellent. This time round Ko-ko, cheap tailor now Lord High Executioner is brilliantly played and sung by Anthony Warlow in fine voice with a Cockney accent. His ‘I’ve got a little list ‘ includes very modern things like mobile phones and is bitingly witty. However, I found his ‘Tit Willow’ song courting Katisha to be a trifle rushed .But his comic timing and the in-jokes are brilliant.

Nanki- Poo, the son of the Mikado in disguise as a gangly, handsome second trombone, is delightfully played by Kanen Breen as an Oxford aesthete. He is a marvellous tenor and displays his talents for bike riding , dancing and physical comedy .Warwick Fyfe is marvellous as the imposing, ridiculously hilarious rotund and multifarious Pooh Bah in fine strong baritone voice with a great flair for zany comedy .

I was also most impressed by Luke Gabbedy as Pish Tush. Richard Alexander as the doll like, be-ermined Mikado with wonderful Kabuki style make up is glorious , strutting his way through ‘A more humane Mikado’, striking Kabuki poses , bellowing one moment and making everyone jump, calm and rational the next.

Taryn Fiebig as Yum-Yum is delightful. Her The Sun Whose Rays is sung with piercing clarity and beauty (and I like the double sided fan for the sun and moon.) Pitti-Sing (Jacqueline Dark) is freckled and full of hypoactive humour quite Enid Blytonish. As Peep-Bo Annabelle Chaffey is engagingly mocking and disruptive.

Adele Johnston as Katisha has a whale of a time and is in fine voice .However she is rather played as a caricature to be made fun of – there is no real poignancy even when she is bewailing Nanki-Poo’s loss. I loved the spectacular Calaboose (from Sleeping Beauty) like entrance in Act 1 – observe the traditional pantomime green lighting for the baddie! And of course she tries to steal the show from the Mikado as his ‘daughter in law elect’ in Act 2 with great glee. The sudden change to music hall style for ‘There is beauty in the bellow of the blast ‘ with Ko-ko is a bit disconcerting but it still works splendidly.

Brian Castles-Onion leads the orchestra in a sparkling rendition of Sullivan’s marvellous score.
Much fun is had by everyone. Go on- succumb to delicious enjoyment.

Performed in English with subtitles. Running time is two hours and 40 minutes including one 20 minute interval.