Maria MacDermott’s work plays with interactions between human forms and other organic matter, while another exhibition has four ceramicists exploring the colour blue.
Lesley Graham 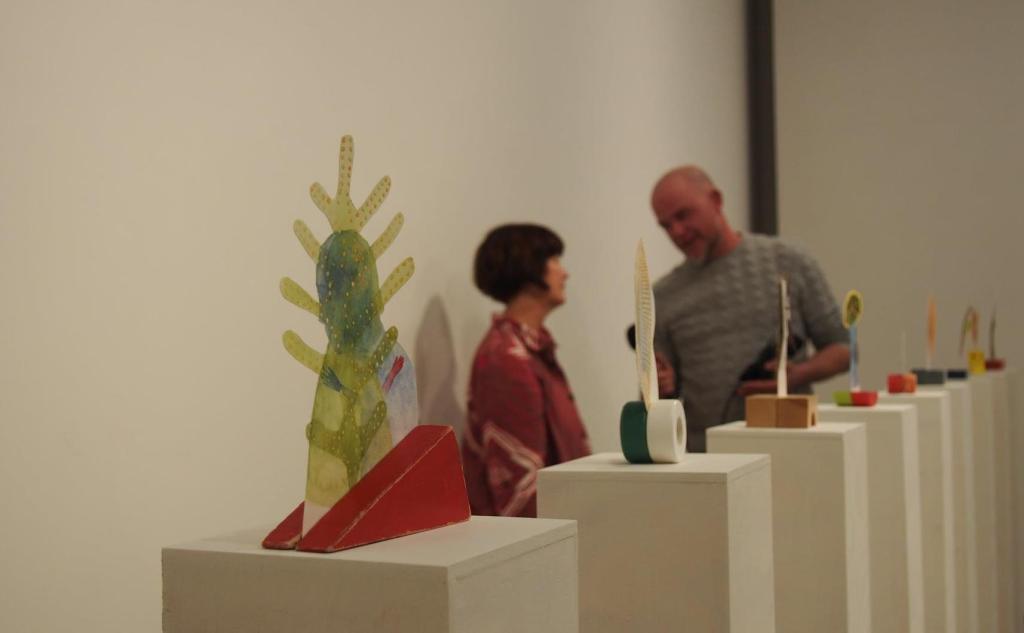 Maria MacDermott’s paintings and sculptures explore ‘being and nature’ as means for conveying experiences of reflective interiority. Image courtesy of Moonah Arts Centre.

Maria MacDermott’s work, The Lucid Shell, greets us at the Moonah Arts Centre’s Exhibit Space. No longer home to the creatures that formed them, three mussel shells are vestibules for human detritus: an exotic snail shell, a bedroom key and a ceramic chip; all trapped in a thick wax and presented formally as if evidence of some new form of categorisation.

Turning the corner, we are met by a series of figures named Martha, Pearl, Ann etc. Some recognisably human and others less so, each incorporates a natural element as a two-dimensional image or small object. Shells replace heads or become offerings as each figure is caught subtly leaning, swinging, shifting weight or bending sideways. Soft crayon, watercolour and print create variety while the Cuisenaire rods used in each model link the series to an origin in schooled categorisation.

Along the back wall is a series of watercolours. Some simple and monochromatic, there are horizons, shapes, clouds, root systems, structures and figures; each distilling one or more complex relationship in their internal juxtaposition.

The next series, also small pedestalled figures (Solonaceae, Polypodiaceae etc), explores a rich vein of interaction between human and biology. Silhouettes are paired and layered with translucent plant-like material. Here again, the common use of child’s blocks references anthropocentric categorisation. The ‘model’ scale of both the figure series seems to indicate a potential for something much more monumental.

In the much smaller Project Space, shared by Sarina Dutton, Dallas Hanson, Penny Proud and Susan Stipcevic-Webb, is Concerning Blue. Tucked around a corner, Proud’s work fuels emotive response. Tragedy of the Commons is a mute cacophony of birds and glazed water. Though reminiscent of Cai Guo-Qiang’s flocks of porcelain (currently at the National Gallery of Victoria), this is a much more domestic scene. The unglazed clay is rough and real; formed and torn by hands not moulds. The bird baths offer a crystalline blue promise to those with wings, but the competition and chaos of the experience is palpable. It would be wonderful to see this work in a larger space and to breathe its theatrical magic.

In direct contrast, Stipcevic-Webb’s work is ultra clean and calm. The Deflagrare and Let’s go and gaze and the sky series offer dreamy-cream tapering forms decorated with cloud like decals. Both hanging and set at eye level, their elongation and rounded ends are reminiscent of both eggs and air.

One of Hanson’s works, Time, Destroyer of Worlds, also includes eggs, but these are brash, shiny and hatched. Set in an ornate clock-like display case, they are more like preserved mementos totally disconnected from their origins. His other work, Love Matters, is a series of eight seemingly solid, possibly cow-bell shaped, clay shapes in shades of soft matte blue. Each displays a decaled text referencing love. It is not clear who has written these poems, but each is positioned to wrap around the shape in a different way requiring the observer to shift and turn to engage with each work.

The last of the four artists, Sarina Dutton, presents a confusing mix of imagery. On one wall, a collection of brightly glazed cartoon-like figures demand attention from shelves, while on the other wall, small organic-shaped bowls offer a very different experience. Some of the latter are so delicately lace-like that they seem a vulnerable universe away from the crude popularist and probably quite commercial figures. Is this the point? Probably not but it raises many questions for the viewer.

Other works on display at MAC until October 19 are Fragments of Calm, a large textile work by Susan Lacey and Carolyn Shearer, and the thought-provoking The Heavy Wait on Small Things by Josie McKinnon in the Avago Space.