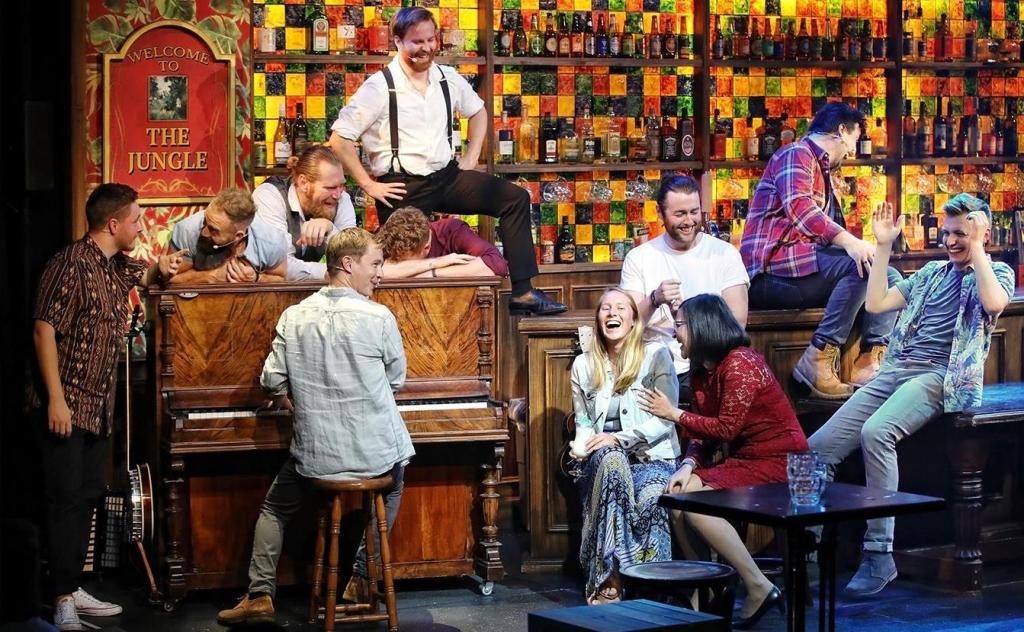 Free-flowing pre-show beer at the on-stage bar, and a soundtrack of Bruce Springsteen and ELO welcome the audience to a pub called The Jungle and its regulars, The Choir of Man. It’s a clever ploy – by the time the choir breaks into their opening number, the Guns N’ Roses classic Welcome to the Jungle, the audience are clinking glasses with their neighbours and ready for a sing-along.

The show is a nostalgic celebration of the local pub which was, for a long time, considered an extension of the British living room. In inclement weather, it offered a warm and welcoming home from home, a place to banter, enjoy a pint and perhaps a game of darts, or, in Ireland, a space to whip out a fiddle and break into song. The Aussie version was always a bit more rough and ready, with the saw-dusted floor not only mopping up the spilt beer but also serving as a spittoon and urinal, but regardless, the pub has always held a special place in popular culture.

The Choir of Man’s narrator, Denis Grindel, wistfully reminisces in rhyming couplets about the days before gastro-pubs and theme bars, when the local was your local. As he introduces us to the pub character list – the bar-room bore, the hard man, the half-pint hobbit, the king of banter, the friendly beast and the smooth talker – it all seems rather nostalgic and old-fashioned. A pub called ‘The Jungle’ in a show called ‘The Choir of Man’ conjures up the idea of some primal meeting ground where chests can be thumped and masculine rituals performed – something that would have your average millennial feminist reaching for a hashtag.

The charm of the show soon wins over the most hardened cynic, though. The cast romp through a jukebox of top ten hits of the 20th Century in accomplished a cappella with the occasional guitar and bar-room piano accompaniment. The set swings from sentimental ballads to foot-stomping sing-alongs, all sung with undeniable talent by the nine-man cast. In between the songs, Denis, with Irish charm and a measure of corny humour (‘reality is in the eye of the beer-holder’), weaves a yarn about all that is lost when a local closes, and the cast drag a few audience members up on stage to raise a glass in its memory.

It all feels very convivial and laid-back, but the cast have worked hard to achieve this light-hearted simplicity. Their voices are superb, and the routines are slick, honed in the years since the show first opened in the UK. There’s a truly beautiful version of Sia’s Chandelier, and a laugh-out-loud urinal ballad complete with liquid soundtrack. A wonderful honky-tonk bar piano version of the Proclaimers’ I’m Gonna Be (5000 miles) manages to effortlessly combine jazz, classical and pop. By the time the hard man (Tom Brandon) breaks into John Farnham’s You’re the Voice, the crowd is clapping, singing, and calling for a second round.

At the end of the show Denis, with a tear in his eye, tells us that ‘When I push through the doors, I know that I’m home’.  It’s a bit corny, but the audience don’t care.  They are too busy having a good time to let a last call get in the way.