Review: What Every Girl Should Know, Brunswick Mechanics Institute (VIC) 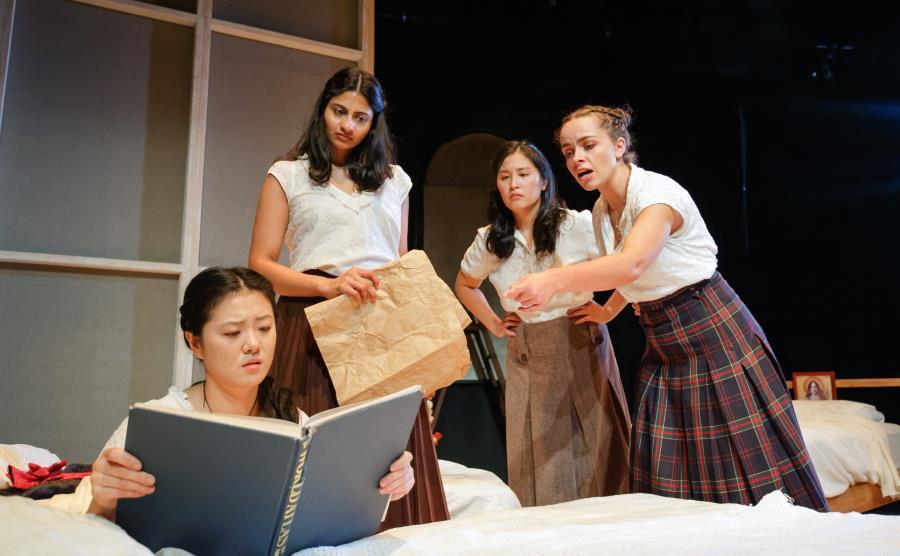 The dark underworld of all-girl Catholic reform schools and institutions has frequently provided rich fodder for stories. Burgeoning female sexuality pushing against the strict, sterile scriptures of the Catholic Church, has given us many a delicious anti-heroine.

In the case of US playwright Monica Byrne’s What Every Girl Should Know (which originally premiered in Durham, North Carolina in 2012), we get to enjoy four subversive ‘delinquents’ – Ann, Theresa, Lucy, and Joan – each with her own charms and troubled backstory.

When new girl, Joan, joins the others in their dorm room, she brings contraband pamphlets written by reproductive rights pioneer and activist Margaret Sanger (who opened the first birth-control clinic in the US in 1916, paving the way for Planned Parenthood). Fuelled by a desire for vengeance and wondrously fertile imaginations, the girls soon form a secret coven, with Sanger as its patron saint. Together, they conjure up flamboyant stories of love and revenge, all while praying to Sanger and offering her whatever humble blessings they can muster. But just when things seem perilously close to a Gidget pyjama party, the girls’ own traumatic stories are revealed and Sanger’s call to emancipation becomes a painful reality.

Director Cathy Hunt has given us a solid rendering of a play which is a little too long and could have benefited from some original editing. Hunt’s decision to remain faithful to the play’s New York setting meant that the performers spoke with inconsistent Brooklyn-ish accents, which felt unnecessary and distracted us from the strong and committed performances of Shirong Wu (Anne), Vivian Nguyen (Lucy), Rachel Kamath (Theresa), and Ravenna Bouckaert (Joan). Jessica Keeffe’s bold sound design was at its best when given free reign, while Danni Ray’s choreography added fantastic elements to an otherwise word-heavy work.

There is a hesitancy about this production which undermines its potential as a subversive feminist work. I wanted more abandon, more darkness, and a greater sensory assault. In the play’s own parlance, I wanted a more intense climax. In fairness, I think this hesitancy is inherent in the writing and to the extent that this can be overcome, this talented ensemble gives audiences an enjoyable theatrical experience.