A feat of immense physicality, by musicians as well as acrobats, combined with emotive musicality.
Barbara Booth 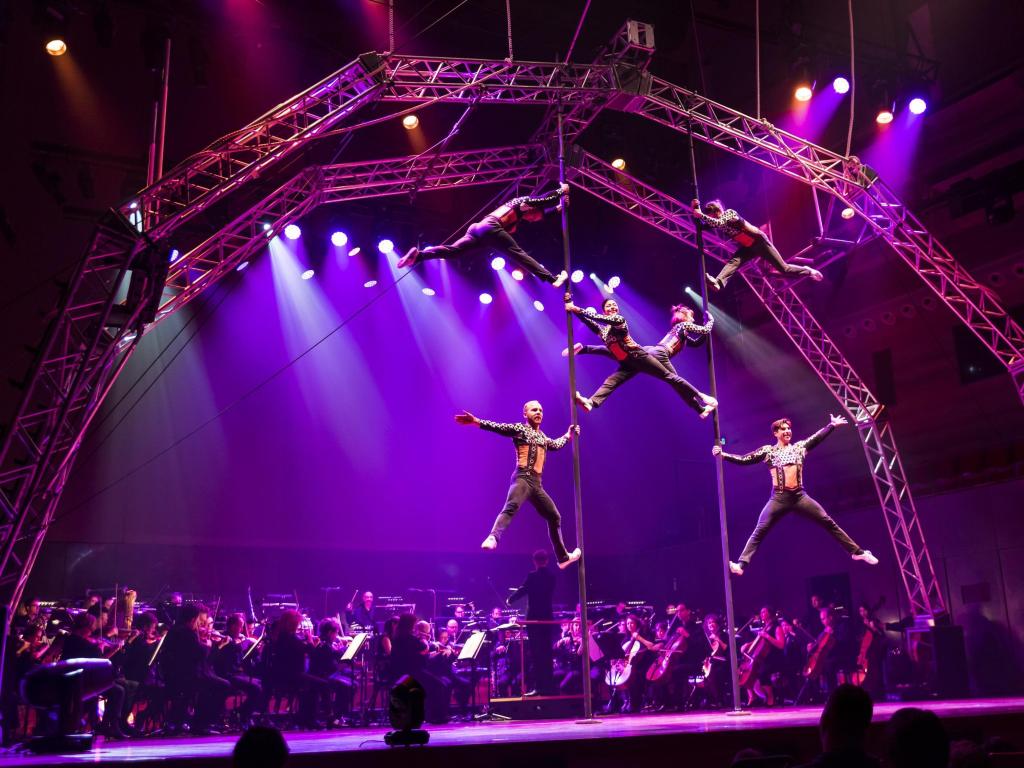 It’s always such a pleasure to see the Perth Concert Hall packed to the gills, no more so than for the opening night of Tutti: Circus Oz with WASO – and what a stunning combination it was!

Since Circus Oz was established in Melbourne in 1978, its appearances have been legendary, delighting over four million people and with many performances in aid of charities. It seemed a shame there was only one other performance of Tutti on this tour, but in view of the company’s commitments, nationally and internationally, it was understandable, and Perth showed its gratitude. Gasps of wonder, shock, laughter and appreciation exploded as eight amazing acrobatic performers descended on ropes and trapezes from a massive aluminium structure that traversed the Concert Hall stage.

Most people who love the exhilaration of classical music would doubtless have seen themselves as conductors of a large orchestra, but how many would have dared to express their feelings by swinging from a great height by a single rope, or leaping into a void trusting only the receiving hands of one or two others? And how many people, especially children, viewing such daring in the constraints of a Spiegeltent or the larger space of the Circus Oz Big Top, would have been aware of or paid much attention to the music which added to the drama?

Just a glance at the 18 pieces of music performed by WASO to accompany the circus manoeuvres took your breath away, so eclectic, varied and well-chosen were they, from the great Russian, Austrian, French and Norwegian composers of the 19th century to more modern Australian and German works of the 20th.

Not only was the evening a feat of immense physicality, by musicians as well as acrobats but, combined with emotive musicality, it was an experience that represented Australian talent in a unique and creditable way.

Nigel Westlake’s Flying Dream Suite, from the movie, Paper Planes, set the scene, followed by Saint-Saen’s Dance Macabre which accompanied a heart-stopping performance by a solo female whom I, unfortunately, cannot credit with a name because the small A5 program, regretfully, did not extend to giving any details about these wonderful performers, let alone any photos! I do think they deserved more than just a list of names but suffice to say that every segment had an element of surprise and skill of execution that was faultless. Some interpretations, however, were exceptionally memorable, particularly Max Richter’s On the Nature of Daylight, which drew deep, sonorous tones from the cellos to welcome an exquisite slow dance by a female acrobat winding her way, sensually, down a thick white rope suspended from the top of the metal frame.

While the unicycle is a standard part of any circus performance, a cyclist reaching out his hand to grasp that of a female who will climb up and onto his back to stand on his shoulders with one leg while the cycling continues is nothing short of amazing; but no matter your ambition, I wouldn’t suggest trying it, even if listening to Elena Kats-Chernin’s marvellous Dance of the Paper Umbrellas!

The introduction of a Charlie Chaplin-like clown in white tails brought an opportunity for humour with Rimsky-Korsakov’s Flight of the Bumblebee and he became a regular performer throughout the evening, using musical instruments as props. During a wonderful sequence of music from Strauss’s Tritsch-Tratsch Polka through Khachaturian’s Masquerade: Waltz to SIA’s Chandelier, the clown was whisked away into the air by a thin cord as he desperately tried to hold onto a double bass. As others continued on the ground, juggling, tumbling and gyrating with hoops, he finally reappeared as a solitary figure and performed a perfect duet with a young female acrobat standing on his head in a full skirt and top. Totally in time with the music, the two gradually exchanged each piece of their clothing. A brilliant execution!

One of the most admirable things about the conducting of Benjamin Northey is his perfect control of the orchestra so that it is never overpowering and synchronized perfectly with the circus performers but, in sympathy with his own comment that he wished he could see the acrobats, I wondered why the orchestra could not have been at the front of the stage and the gymnasts performing on a raised podium at the back. It would also have made it easier to see some of the floor-based acrobatic routines.

Northey did have his circus moment eventually by turning from the podium and rolling onto a spongy mat on the stage to finally end the evening with a resounding heart-thumping rendition of AC/DC’s Thunderstruck.

Who could ask for anything more?!