Aspirations, egos, classes and tones all clash in The Overcoat – a title as innocuous as it is tragic.
Glen Falkenstein
[This is archived content and may not display in the originally intended format.] 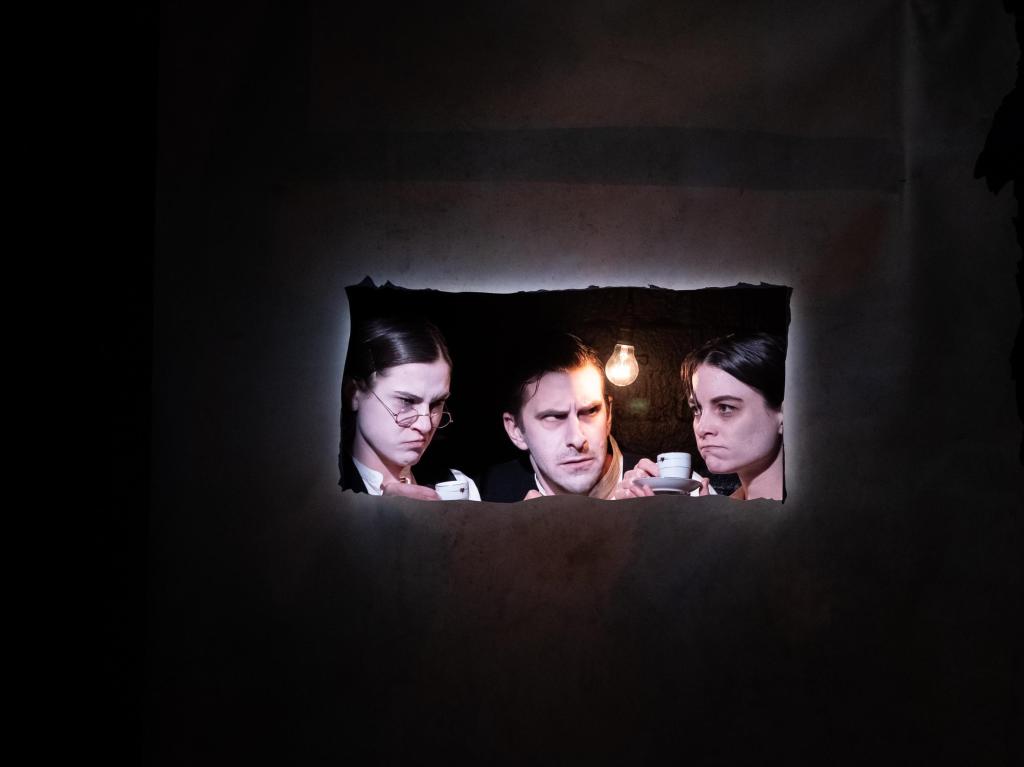 The cast of The Overcoat photo by Clare Hawley.

Set in Saint Petersburg amidst a regimented and immeasurably ordered approach to bureaucracy, Nikolai Akakievich (Charles Wu) sifts through files day by day, overshadowed by co-workers who don’t plan on sticking their necks out for anyone. Deciding to sell everything he owns in order to buy an overcoat, things don’t go as planned.

Accompanied by a sterling and oh so welcome troupe of jazz musicians (Sarah Evans on Double Bass, Josh Willard on Saxophone and Tate Sheridan on Piano) setting an alternately quiet and unsettling ambience throughout different stretches of the play, most noteworthy about this production happens to be that which adorns it. Some complex set design and a towering recreation of the environment situates us in the place and time more than much else. The set’s backdrop is cleverly decorated and used to surprising practical effect at a critical juncture midway through the play.

Had this and the evident depth to the prop been used more frequently this would have been just as well, with the entire, flexible staging nonetheless serving throughout as a reminder of the despondent and often absurd predicament our main character faces.

With Wu ably anchoring the material, Aaron Tsindos is especially memorable as an Officer of the law, together with Laura Bunting enjoyably managing some of the more pathos-ridden aspects of The Overcoat. Kate Cheel has a particular impact as Nikolai’s Landlady Karolina, navigating well the terrain of the play as the tone shifts moreover in the second half.

The cast of The Overcoat photo by Clare Hawley.

Reaching it’s peak in those heightened breadths of confusion and farce, to see what Nikolai has to contend with is as intriguing as it is conversely vexatious. Playing multiple characters convincingly, the cast flit about the stage and build to that tragic which, emulated in kind elsewhere in the play, recurringly jars ever so strongly with the folly-ridden tone The Overcoat otherwise pursues.

The creative gambit of the production no doubt, based on the short story by Nikolai Gogol, the resounding impact of the play’s concluding notes, the style of which reverberates throughout, contrasts with rather than underlining or expounding upon that grotesquely ludicrous aesthetic which is the predominant focus of The Overcoat.