Exquisitely written and performed, this drama about identity, gender, faith and science is mesmerising and utterly of the moment.
Richard Watts 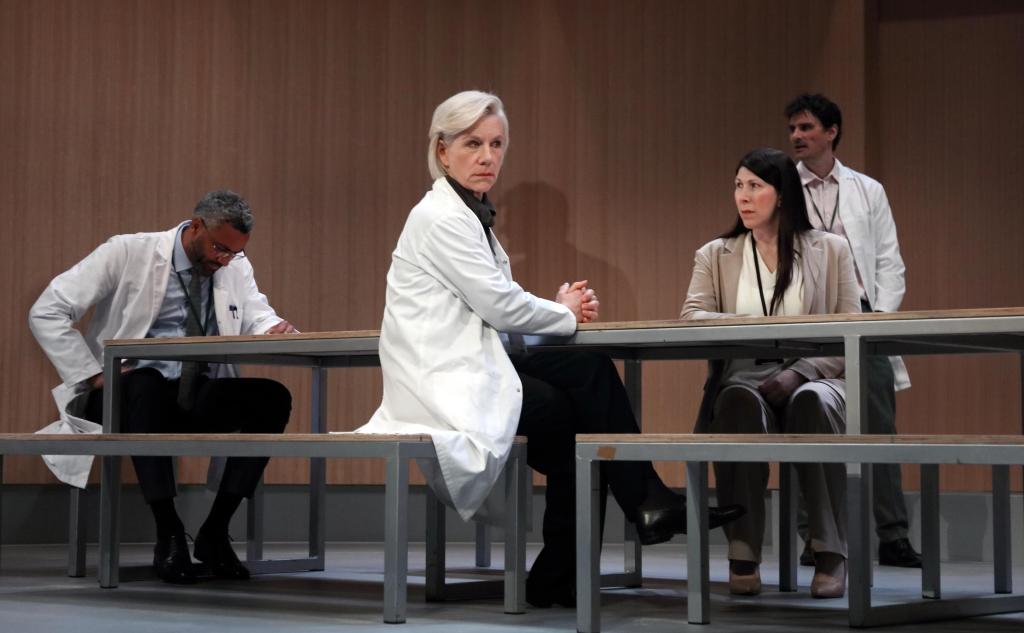 Identity politics, social media lynch mobs, a dying patient’s right to a peaceful death and the battle between faith and science – for a play originally written in 1912, The Doctor is totally contemporary.

Freely adapted from Arthur Schnitzler’s ‘comedy of character’ Professor Bernhardi, Robert Icke’s contemporary version is a dense, wordy yet thrilling story of moral minefields and weaponized good intentions, and features one of the performances of the year from Juliet Stevenson as the acerbic, fiercely intelligent and uncompromising Professor Ruth Wolff.

Wolff – who is culturally Jewish but irreligious – refuses to allow a Catholic priest to administer the last rites to a dying teenage girl, arguing that the priest’s presence will frighten the 14-year-old who does not know she is on death’s door, and that she herself does not know the patient’s own religious views and thus cannot consent to the priest’s visit. Her act of principle creates an explosion which is cultural, spiritual and political. That the priest banned from entering the patient’s room is black and Wolff presents as white only further complicates proceedings.

As Wolff’s friends and colleagues take sides and the debate splinters along social, cultural and political fault-lines, the ensuring firestorm engulfs all in its path, including Wolff herself and her young friend Sami (Liv Hill) who initially seems to be one of the few uncomplicated characters in the play.

Part of the genius of this production lies in its casting – Icke has cast against type, with actors playing characters of different races and sexes in contrast to how they present on stage. What could feel gimmicky in the hands of a less skilful director here only enhances the drama, challenging the audience to consider how we read people, and provoking gasps of shock and surprise as characters’ cultural and gender backgrounds are eventually revealed.

The production opens with the cast walking onto a set whose curved walls subtly suggest both hospital board room and Roman amphitheatre, foreshadowing the gladiatorial conflicts to come. The actors don aspects of their costumes as we look on; a visual reminder that none of us are just one thing, one identity – we all play multiple roles in our lives. Perched above the stage, a drummer (Hannah Ledwidge) plays a live accompaniment to Tom Gibbons’ score, adding tension and underscoring drama as the play unfolds.

Ranging from philosophical debates and cultural interrogation to revelations about love, sex and death, the writing is compelling and electrifying – whether depicting a televised debate which turns Wolff’s insistence on appropriate language and formal procedure against her, starkly revealing her privilege in the process, to a gentle conversation late in the piece that offers a glimpse of hope and connection in our atomised and adversarial world. Central elements of the set gradually revolve – a visual evocation of the play’s shifting viewpoints – and the nuanced, detailed script encourages us to consider all sides of the ongoing debates.

Performances are exquisite, the direction sharp and assured. As the grieving father who believes Wolff’s actions have condemned his teenaged daughter to Hell, Jamie Parker helps us understand the conviction of faith and the man’s fury that his beliefs have been betrayed. Liv Hill’s Sami brings humour and the promise of youthful potential to proceedings, making her eventual betrayal all the more heartbreaking, while Joy Richardson as Charlie – Wolff’s lover – effortlessly embodies warmth, loss and quiet dignity. Stevenson, as previously mentioned, is superb; whether raging, weeping, fearful or confrontational, she gives a compelling and thrilling performance.

Just like its titular character, The Doctor is intelligent, complex, brilliant theatre; a nuanced exploration of faith versus science, ambition versus idealism. It urges compassion in a divided world. For that reason alone, let alone the strengths of the direction, script and performances, it is mesmerising and unmissable.