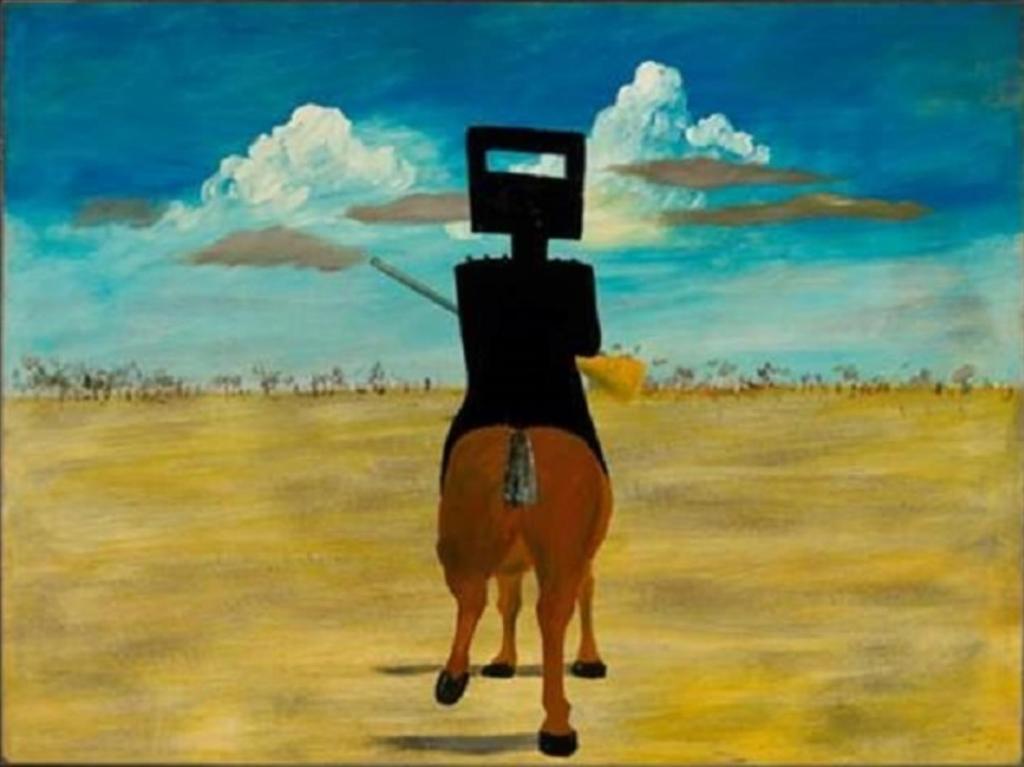 Unless you’ve been living under a rock, you should recognise Sidney Nolan’s iconic image of Ned Kelly. You should also know the famous ‘Such Is Life’ quote – purported to be Kelly’s last words before the bushranger was hung in a Melbourne Gaol in 1880. Some of you may have used it yourself on the odd occasion, while others may have made the ultimate commitment to its philosophy in ink, so strong is this story in the Australian psyche.

But how many of you know anything about the other 25 pictures in the Nolan series? Take advantage of this opportunity and reacquaint yourself with such a significant part of Australian history while it is showing at the Art Gallery of Western Australia (AGWA). If only all history lessons were as entertaining as Nolan’s humorous fact and fiction exploration.

Over the twelve months between 1946 and 1947 Nolan hunkered down at the home of Sunday and John Reed. After reading through newspaper articles, police reports and the Royal Commission Report, he set about painting the story of Ned Kelly using the kitchen table as an easel, or so the story goes.

In telling the Kelly story, many painters would have stuck to the facts but not Nolan. With a flair for storytelling, he may have made a few embellishments here and there, and cleverly leaves it up to the viewer to sift the fact from fiction.

One such example is the painting titled Steve Hart dressed as a girl (1947). I was happily perusing each painting, taking in the sturdy brushstrokes and bold images, until I read the accompanying caption about Hart. It stated that many of the Kelly gang ‘may have taken to female attire to escape the police’ and that Hart had once taken it one step further thereby ‘winning at the Greta Races while dressed as a girl riding side-saddle’.

Could this be true? I pondered. One thing was certain, this was not your average dry, retelling of history, that could be admired with a quick walk through. No, this series of paintings demanded more from the viewer.

The next painting to get me guessing was called Quilting the armour (1947), which showed Mrs Skillion, or Margaret Kelly as she was also known, sewing soft blue quilting into the inside of the famous helmet. Not being an art officiano, this stopped me in my tracks, truth or an artist’s poetic licence?

The thought ate away at me until I eventually turned and asked one of the nearby official guests to collaborate the story. Much to my chagrin I later discovered that the person I’d asked was none other than Nolan expert, Dr Deborah Hart, who also just happens to be Head of Australian Art at the National Gallery.

Dr Hart spoke about the strong family connections born out of Kelly’s Irish heritage, the tenderness and loving bonds shared within the gang. This considered, it’s not unimaginable then that such love could foster a quilted cap to make Kelly’s life easier.

As I returned to admiring the painting with a fresh perspective, I was pleasantly surprised when Dr Hart broke away from a television interview to tell me, that she too considered the blurring of fact and fiction and the underlying importance of family, key elements of the exhibition.

Further on Nick Mitzevich, Director of the National Gallery of Australia, enthused that Nolan had ‘captured the whole person without judgement’ and ‘depicted the harsh Australian landscape in a new light’, thereby making the series equally important in changing the traditions of landscape art.

Later still, Melissa Harpley, AGWA curator of Historical and Modern Art, said of the painting, Death of Sergeant Kennedy at Stringybark Creek (1946), that it signalled a change – the beginning of the violence, the first conflict between Kelly and the police. It was also the first time Nolan showed Kelly’s eyes inside the helmet.

As a side note, I was intrigued to listen as Harpley explained how the uniform size of the paintings had made installation easier, and how modern technology had become an integral part of the process. On this occasion her team was able to send real time vision back to the National Gallery team to ensure everyone was happy with the exhibition layout.

As I finally made it to the end of the exhibition and stood back to witness the tale as a whole, I pondered: You may be tempted to move quickly through the exhibition to the most iconic and valuable painting standing pride of place on its own at the end of the gallery space. However, I strongly recommend that you take the time to view the series of vignettes in order, almost like a picture book or, given the humour, a cartoon. That way you’ll get the sense of having watched a short film as the story builds before you, much as it must have appeared in Nolan’s head.

Make sure you read the captions positioned next to each painting. They provide greater depth about the story and about why they were painted so. For example, the use of peacocks as colourful watchdogs.

The Kelly series is part of AGWA’s current focus on free-thinkers, and ground-breakers across three exhibitions – Rebels, Radicals and Pathfinders. It is on loan from the National Gallery of Australia.