Both sumptuous and ascetic, Samsara is a contemporary dance duet that embodies the best elements of India and China’s special relationship.
Jinghua Qian 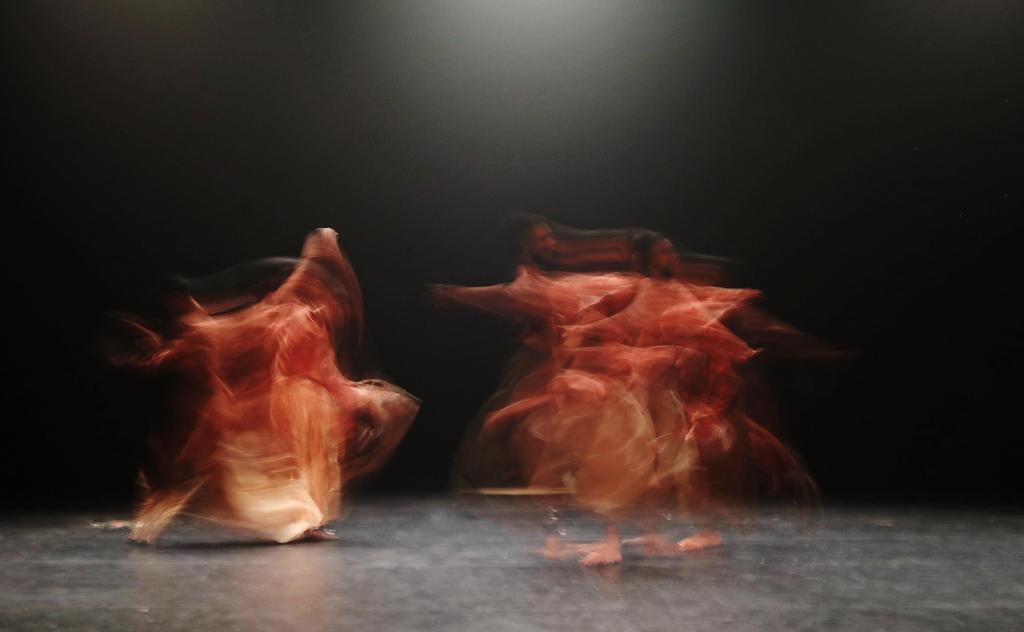 Samsara begins with the sound of a gong and Hu Shenyuan’s sinuous form caught in a shaft of light. He twists and writhes, locking his joints, every angular movement finely balanced and extended, every backbend impossibly deep and liquid.

Without a word, Hu draws us into the conception of Sun Wukong – the monkey god ‘born into emptiness’.

Created and performed by internationally renowned dance artists Aakash Odedra and Hu Shenyuan, Samsara is inspired by the 16th century Chinese epic, Journey to the West, in which four pilgrims travel to India to study sacred Buddhist texts as the Chinese translations had been badly corrupted. Alongside the literal pilgrimage is a spiritual journey towards enlightenment. Australian audiences may know the story as Monkey Magic, but no familiarity with the narrative is necessary as Samsara only loosely references the concept of the pilgrimage without replicating the plot.

Instead, Odedra and Hu present a contemporary dance work that embodies India and China’s special relationship through virtuosic collaborative movement. There are elements from ballet, western contemporary, Chinese folk dance and opera, and the classical Indian dance form kathak in the mix, but most of all, there is a mesmerising chemistry between the two dancers which drives the production.

Hu’s balletic precision complements Odedra’s more robust and rhythmic movement, especially when the pair play off in a volley of call and response. There is humour here, too: at one point, Hu is positioned behind Odedra, and you begin to anticipate the recognisable image of a many-armed deity, but instead Hu places his feet over Odedra’s ears. In some acts, the pair mirror each other, each lending the inflections of their individual dance vocabularies to their movements; in others, they become one body, an eight-limbed shape with no head or tail, a god and a beast.

With Odedra draped upside-down on Hu, they form a kaleidoscopic vision, symmetrical across both axes as their limbs ooze and glide. The image resembles a Rorschach inkblot folding in on itself. It’s a sophisticated evocation of India and China’s parallel and entwined histories, a double helix reaching through endless time.

In another sequence, repeated movement crossing the stage from right to left inverts Eurocentric expectations, gesturing toward the literal ‘journey to the west’ as well as various non-European scripts. It’s a powerful abstraction of how it feels to recentre and ‘reorient’ the map to position India as ‘the west’.

Yaron Abulafia’s lighting design is stunning and sensitively attuned to the work. The stage becomes a sacred space with square lightwells mimicking the architecture of temples and tombs, or patterned light creating a mosaic tile effect. Often, the light feels viscous as the dancers reach into it, scooping it up and letting it drip from their bodies. There’s a sense of monastic reverence in the lighting. At one point, a thick sheet of light becomes the backdrop, shrouding the musicians.

While the music – which draws from various disciplines including Mongolian overtone singing and traditional Chinese percussion – brings a heady richness to the drama, there are moments when the production perhaps veers toward self-orientalism. There are just so many aesthetic layers that some feel rootless and ungrounded.

But for the most part, Samsara is a spectacular, visceral work that evokes ageless mysticism through contemporary movement. Odedra and Hu’s chemistry is incredible to witness. At a time when it’s difficult not to despair for India and China, in an endless feed of worrying news, Samsara reminds us of the richness and beauty of our shared heritage.